I have one more day with my friends Avis and Bill, and, despite their having to work Wednesday and Thursday, we still had lots of fun (plus I have my own work to do when they’re working).

Here’s what happened yesterday (Thursday).  I first returned the CeilingCat RentalMobile to Enterprise, where, mirabile dictu, they fully reimbursed me for the tire I had to buy to replace the flat tire that was too damaged to be patched. They also gave me a 10% discount and free upgrade on my next rental. An unexpected bonus, and kudos to Enterprise.

We then repaired to a nearby gas station for burritos. You’d think that a gas station would be an unlikely place to get burritos, but in Las Cruces that’s where the best burritos are to be found. In fact, I’m told that people decide where to buy gas based on the quality of the burritos (they’re made in a kitchen at the station).

Here’s the large selection at the One Stop station in Las Cruces, and if they don’t have the kind of burrito you want, they’ll make it for you on the spot. Each tray has a different kind of hot burrito. Note the posole and menudos (also house-made) in the front: 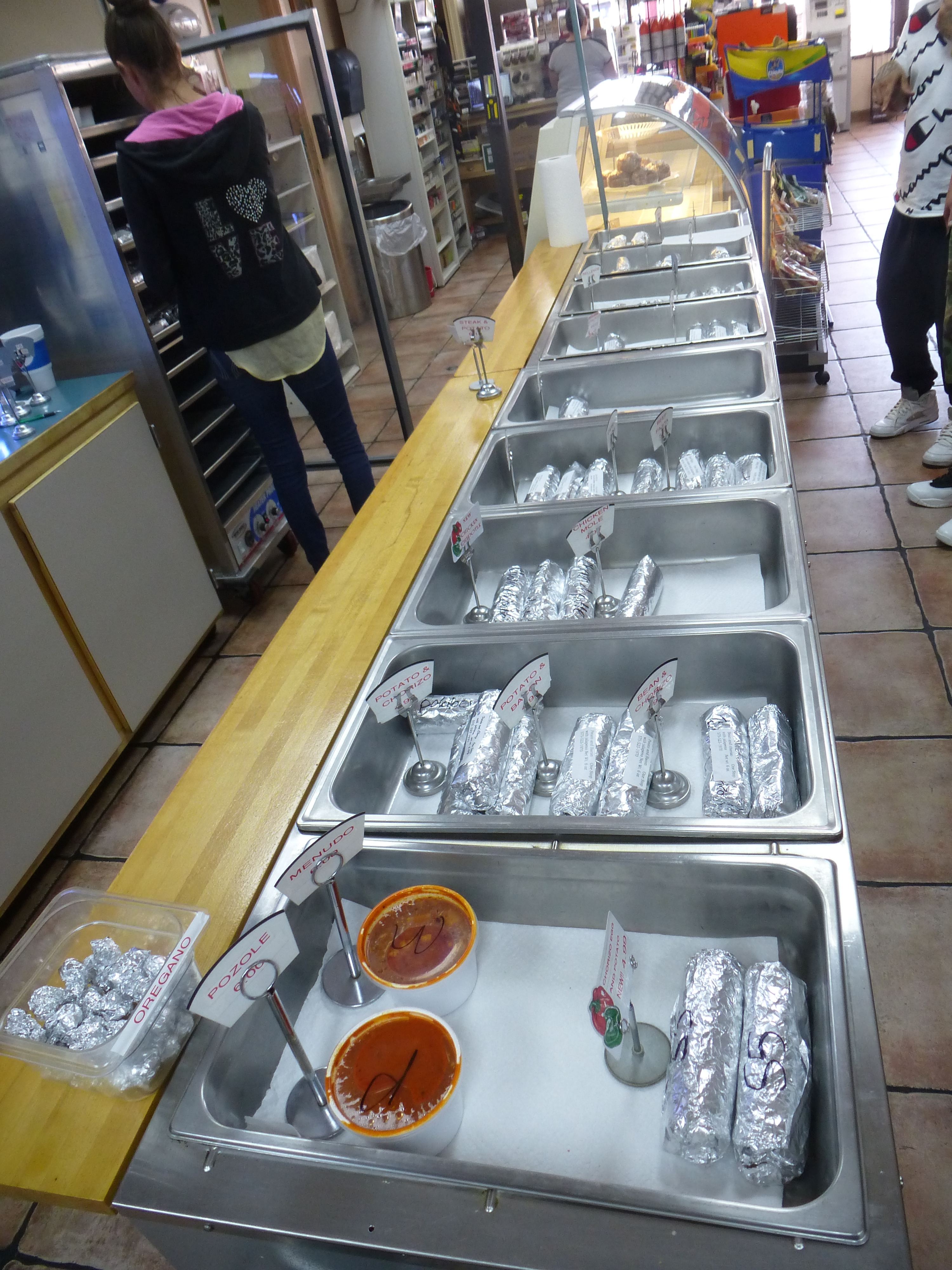 I had the jalapeño and chicken burrito: 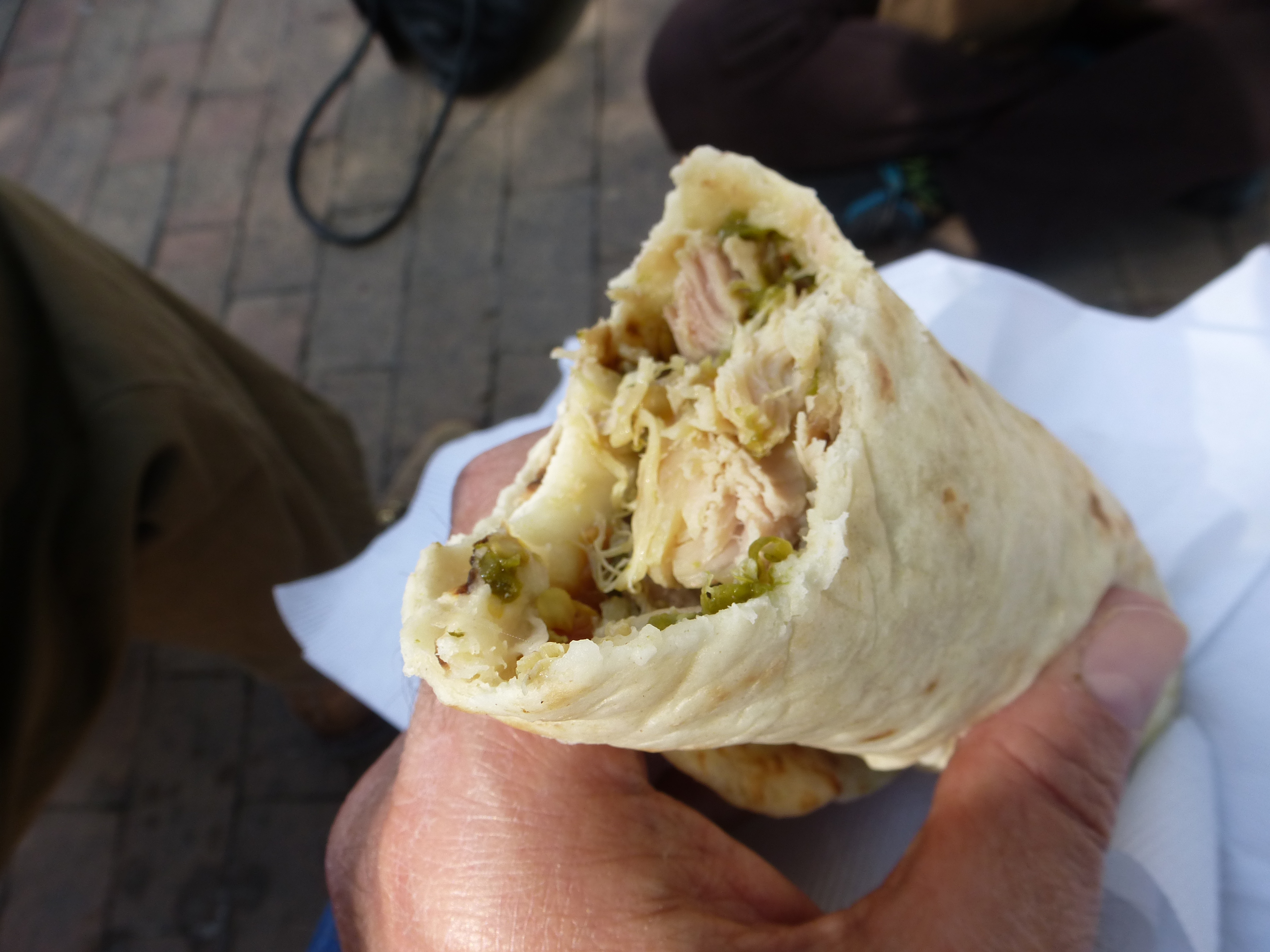 Avis had the chile relleno burrito, something I hadn’t encountered before. They simply wrap an entire chile relleno in a flour tortilla. I got to taste it, and it was very good: 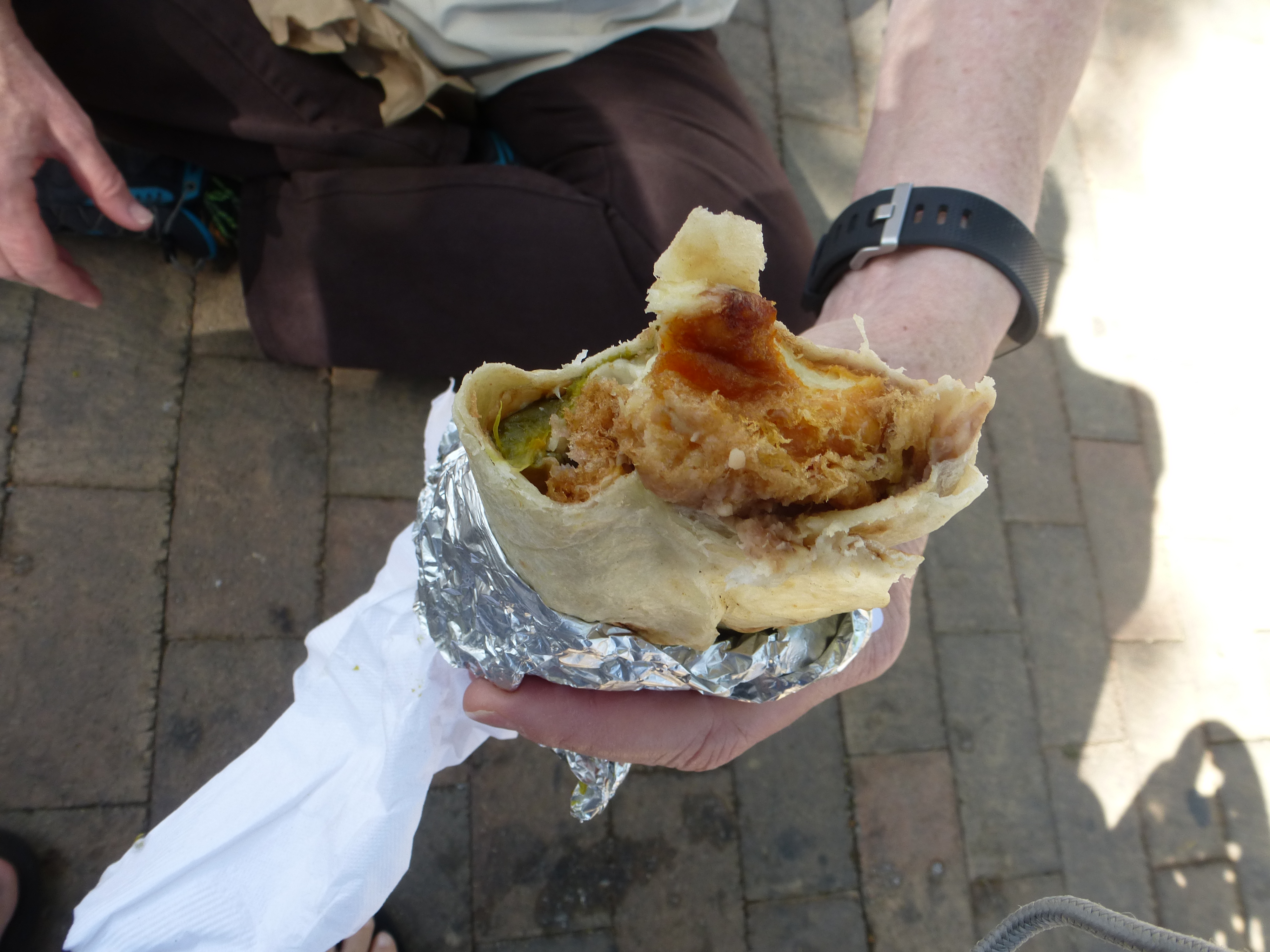 I left out one place we visited on Wednesday. In my quest for the perfect green chile cheeseburger, we repaired to Dick’s Cafe, renowned for the item, which is simply a juicy cheeseburger smothered with sauteed green chiles. The tradition is to add mustard, but I eschewed that condiment. 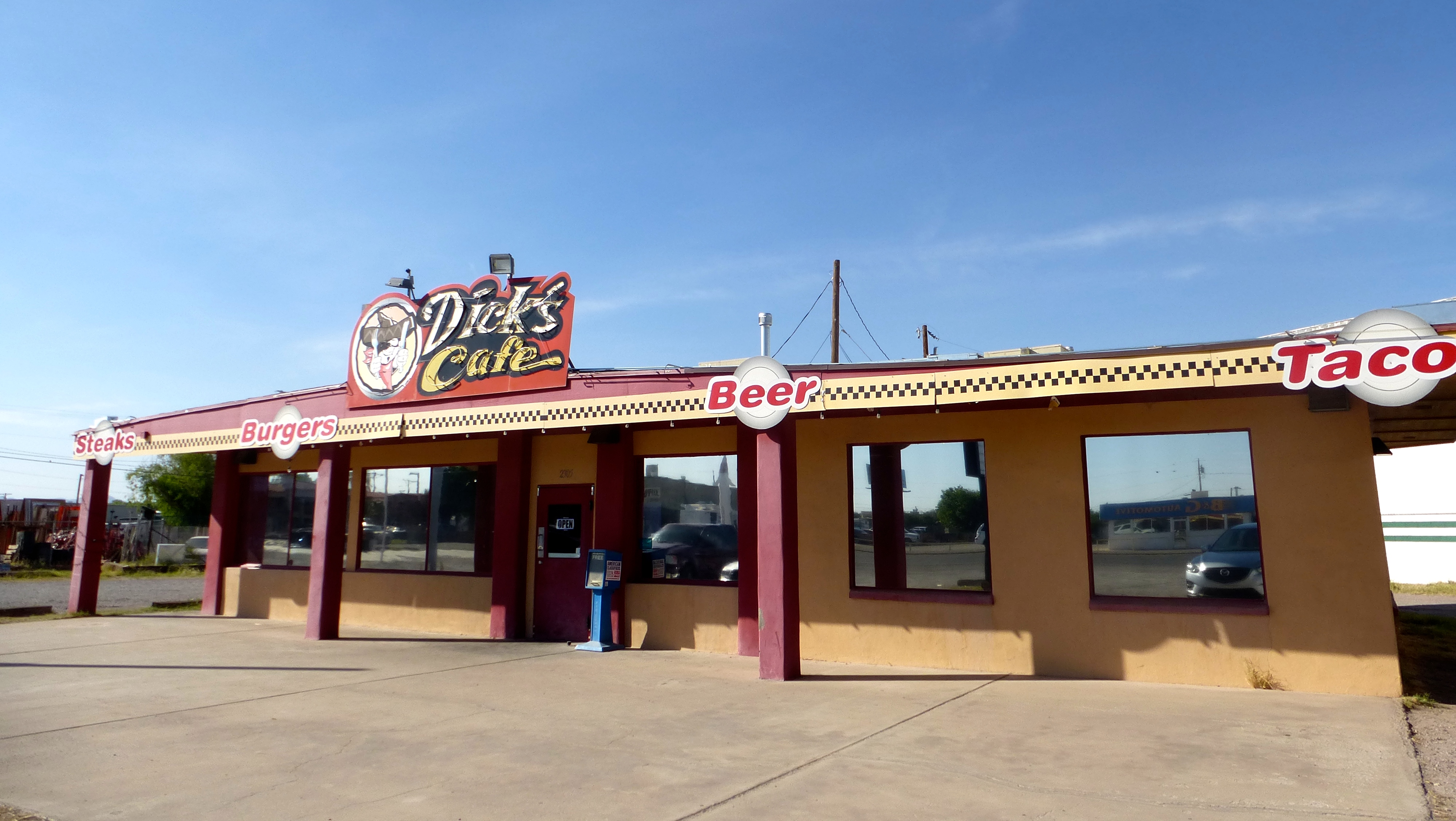 I had the “jumbo” chile cheeseburger, cooked rare, with fries. Here I’ve peeled back the cheese so you can see the chiles. They also have a “double jumbo” burger made with 18 ounces of meat. I didn’t think I could handle that one. 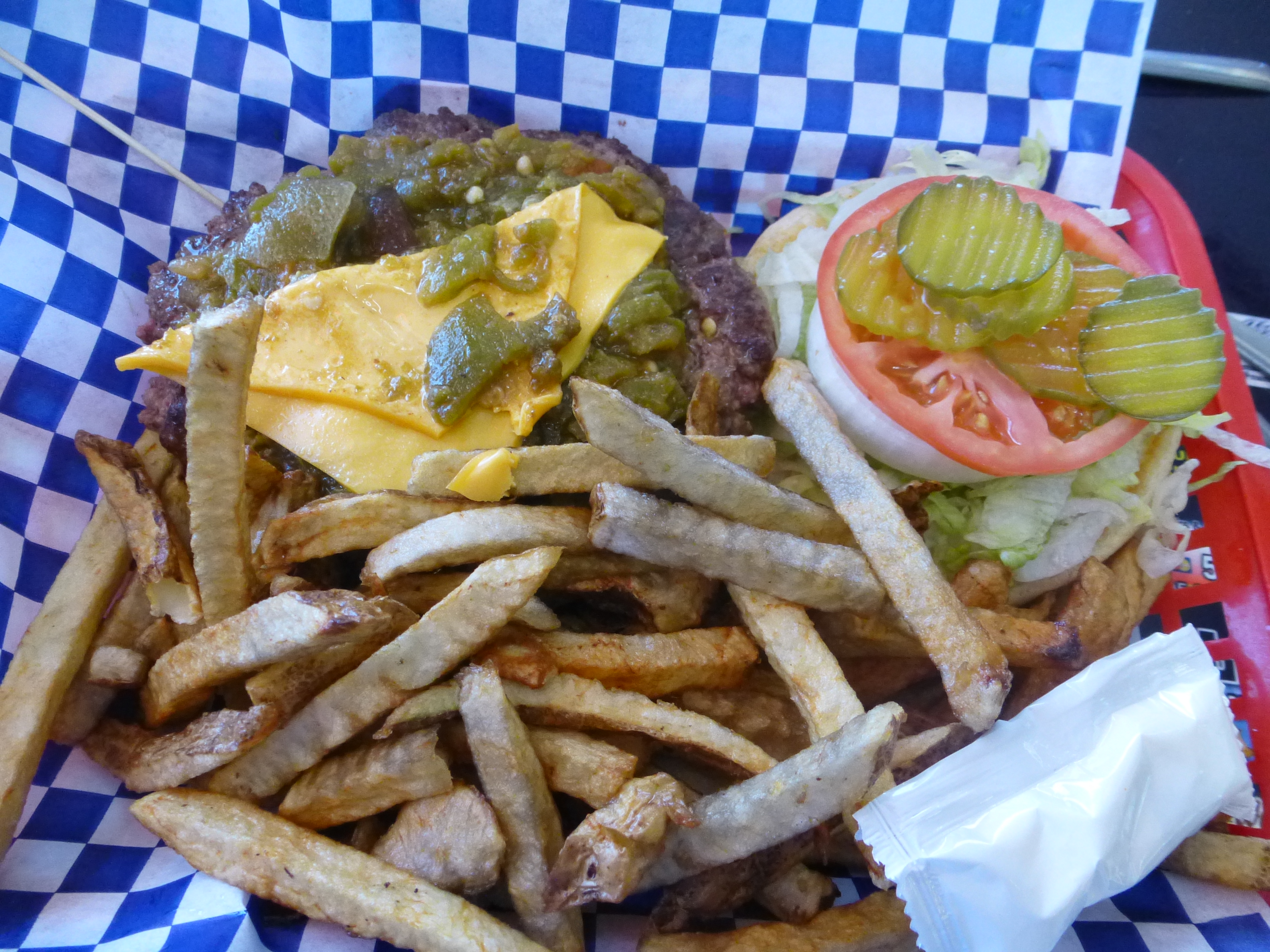 When cooked rare, the burger is ungodly messy, and I ultimately had to use a knife and fork to eat it. It was delicious. Green chile cheeseburgers should be adopted more widely in the U.S.! 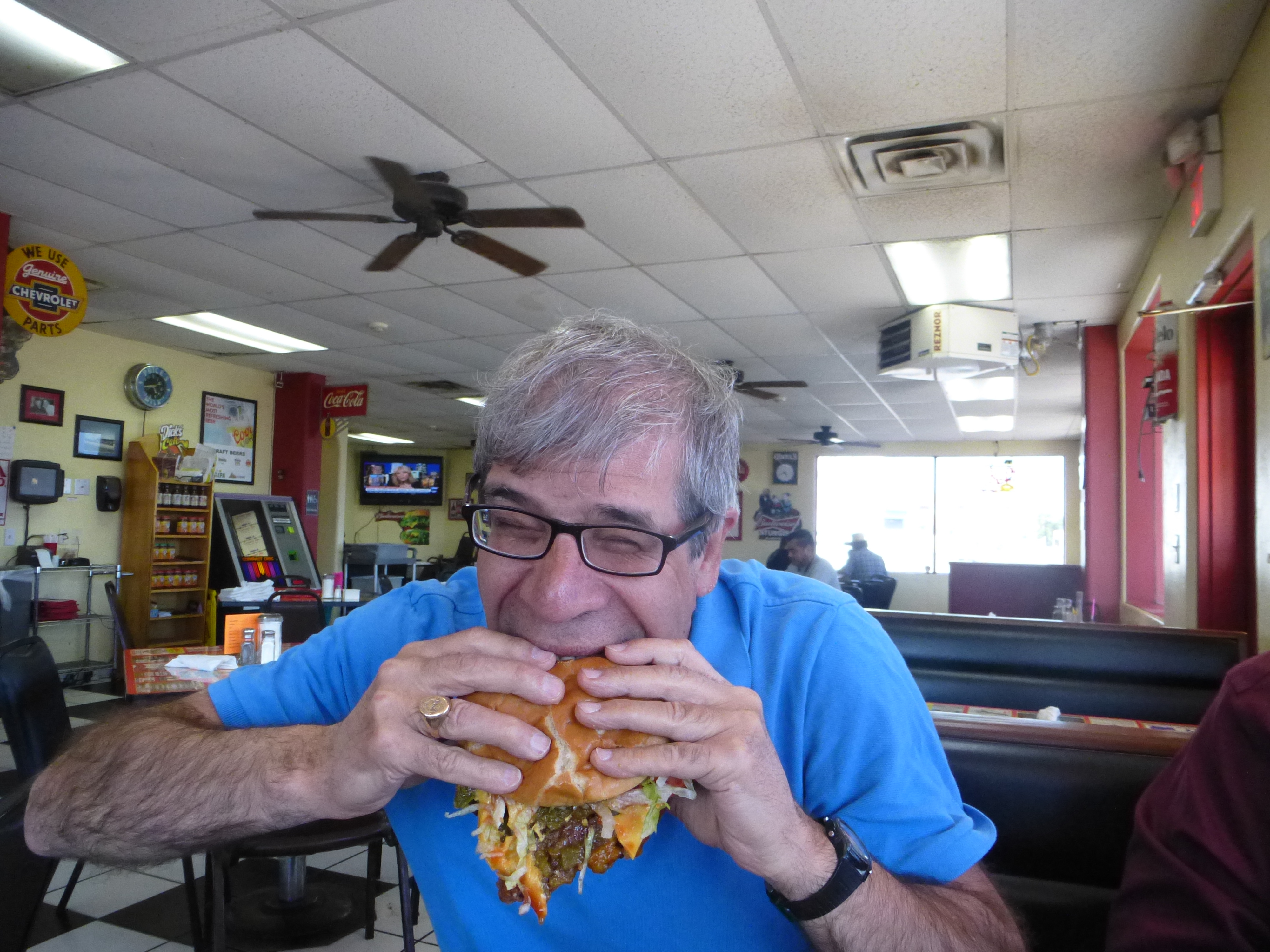 To complete the pigout, we went to Caliche’s Frozen Custard for dessert; it’s a local favorite and serves all kinds of sundaes and mix-ins. Note that it’s famous as the “home of the green chile sundae” (see bottom of left column, too). I didn’t have one as that didn’t sound too appetizing. But who knows?

“Caliche“, by the way, refers to the calcium carbonate deposit under the surface of the local desert, a stiff white layer whose name has been appropriated in the name of this treat. 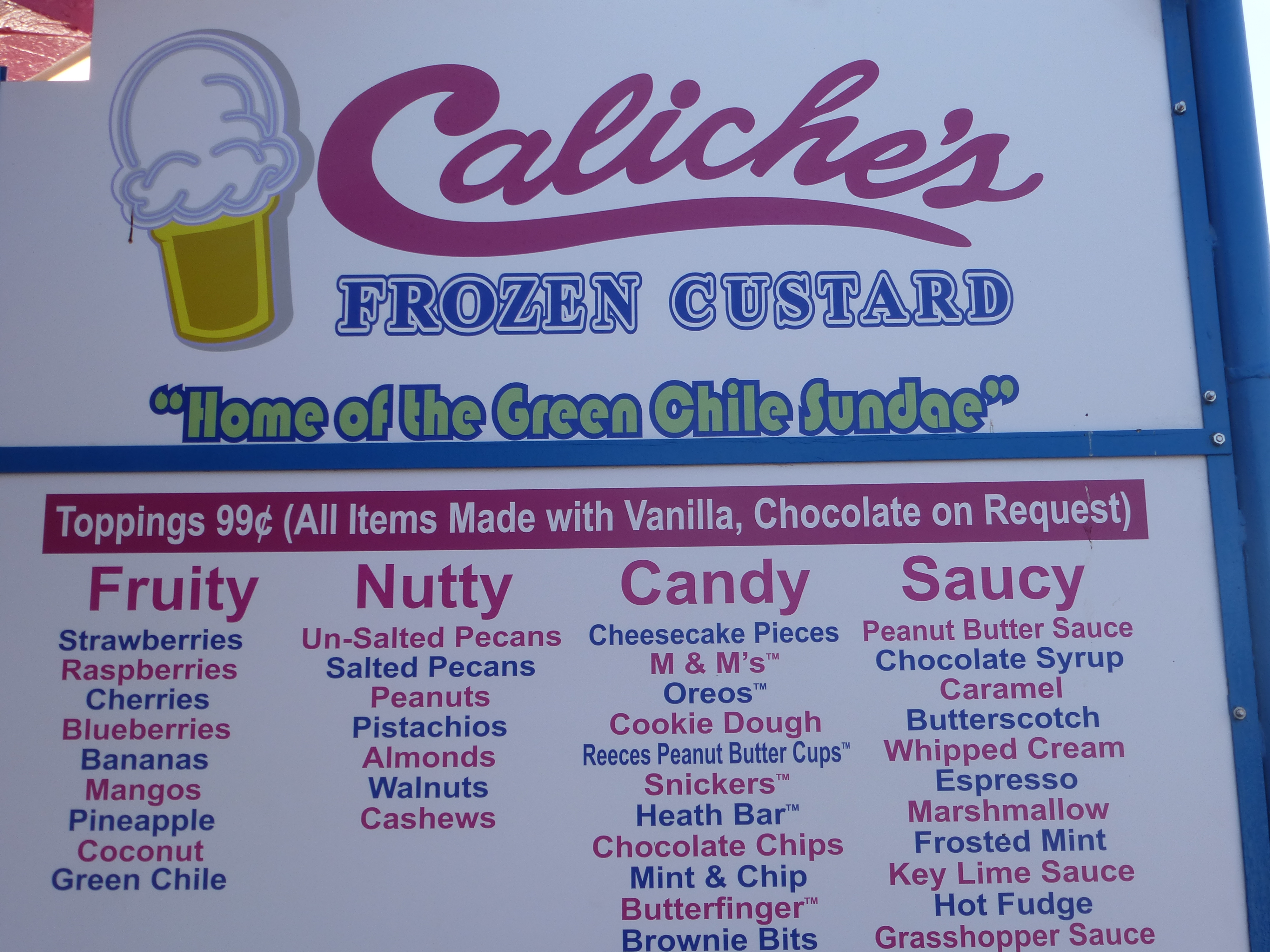 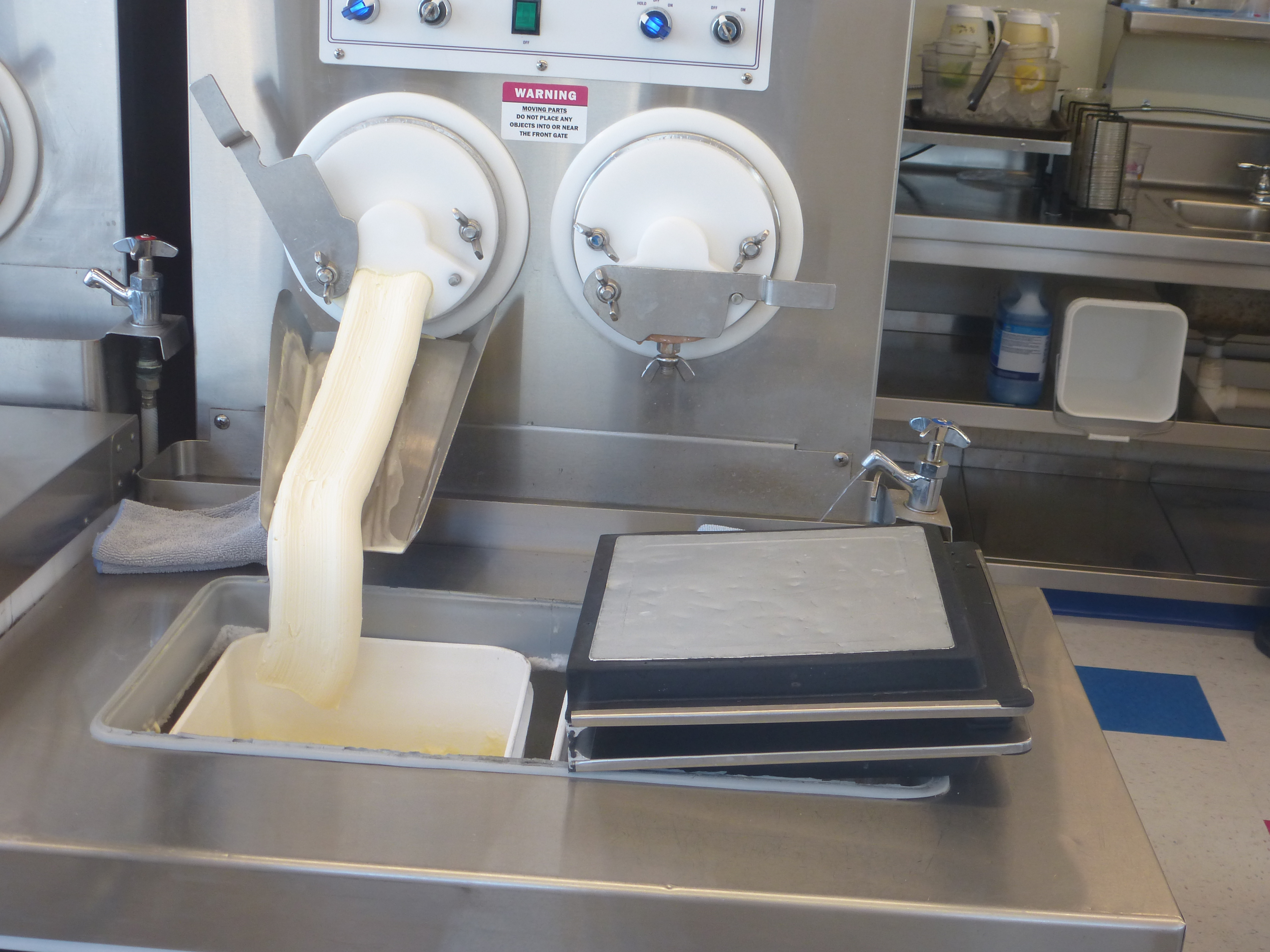 I had a caliche with hot fudge topping and brownie chunks mixed in. It was studded with large pieces of homemade brownies. After that jumbo green chile cheeseburger and then this, I needed a nap. 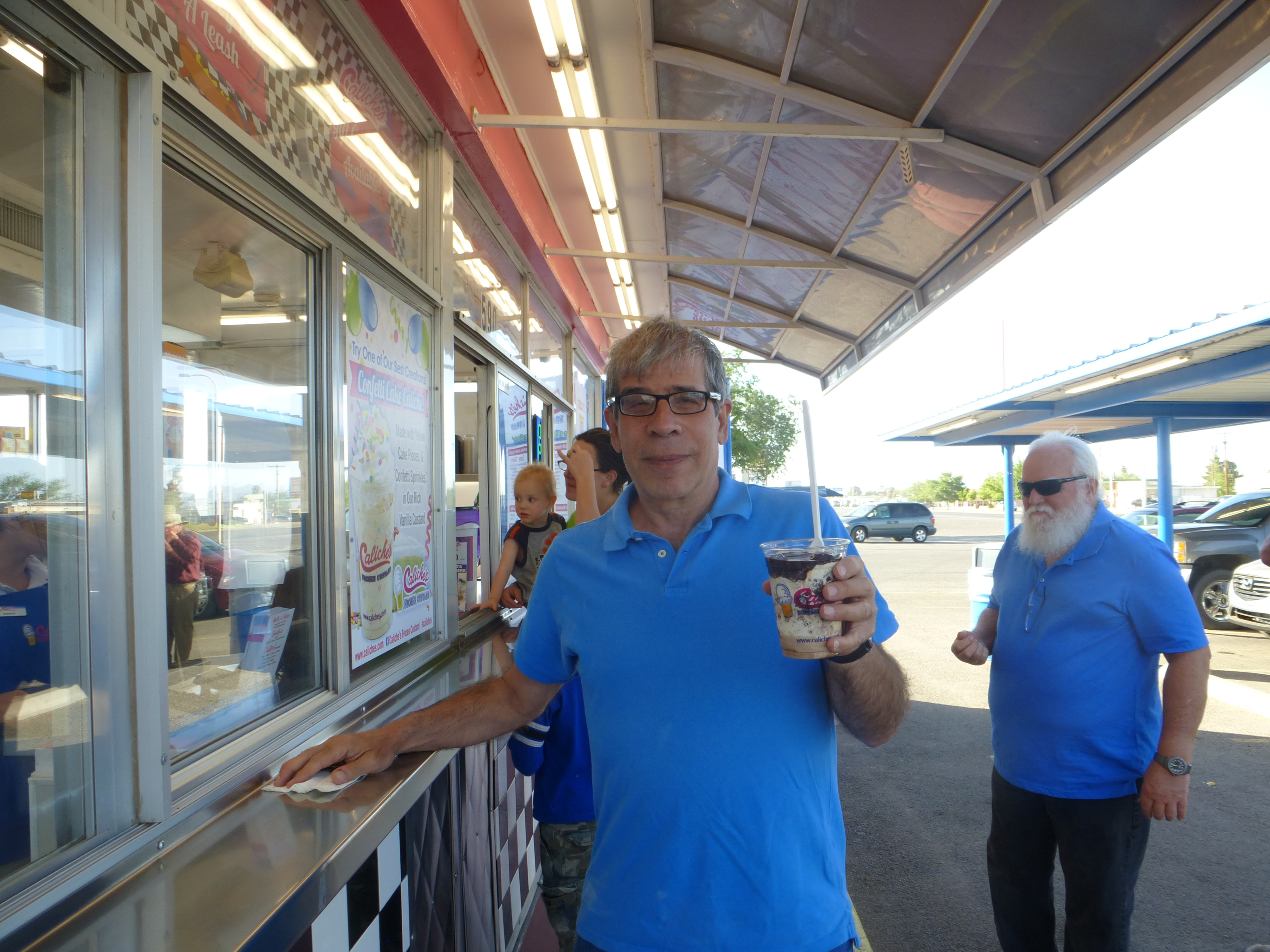 The ocatillo (Fouquieria splendens) is a familiar plant of the Southwestern desert, flowering once a year, as it is here in the nearby town of Mesilla.  As Wikipedia notes:

The bright crimson flowers appear especially after rainfall in spring, summer, and occasionally fall. Flowers are clustered indeterminatelyat the tips of each mature stem. Individual flowers are mildly zygomorphic and are pollinated by hummingbirds and native carpenter bees.

The “spines”  are actually petioles, the leaf stalks that attach the leaves to the twigs. The first leaves produced die, and the remaining petioles become the thorns that protect the plant. 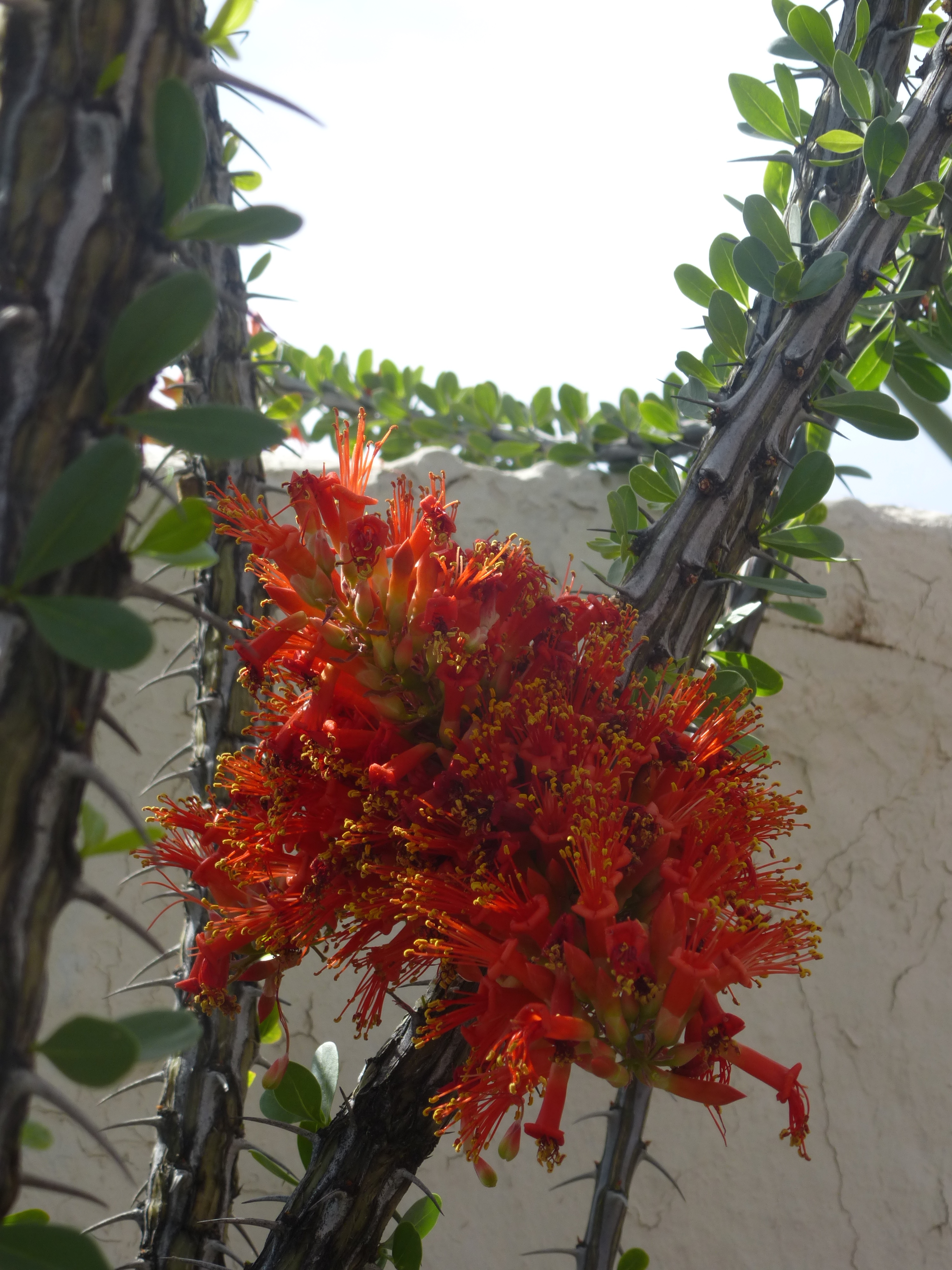 Hesperaloe parviflora, a native red yucca whose flowers attract (and are pollinated by) hummingbirds: 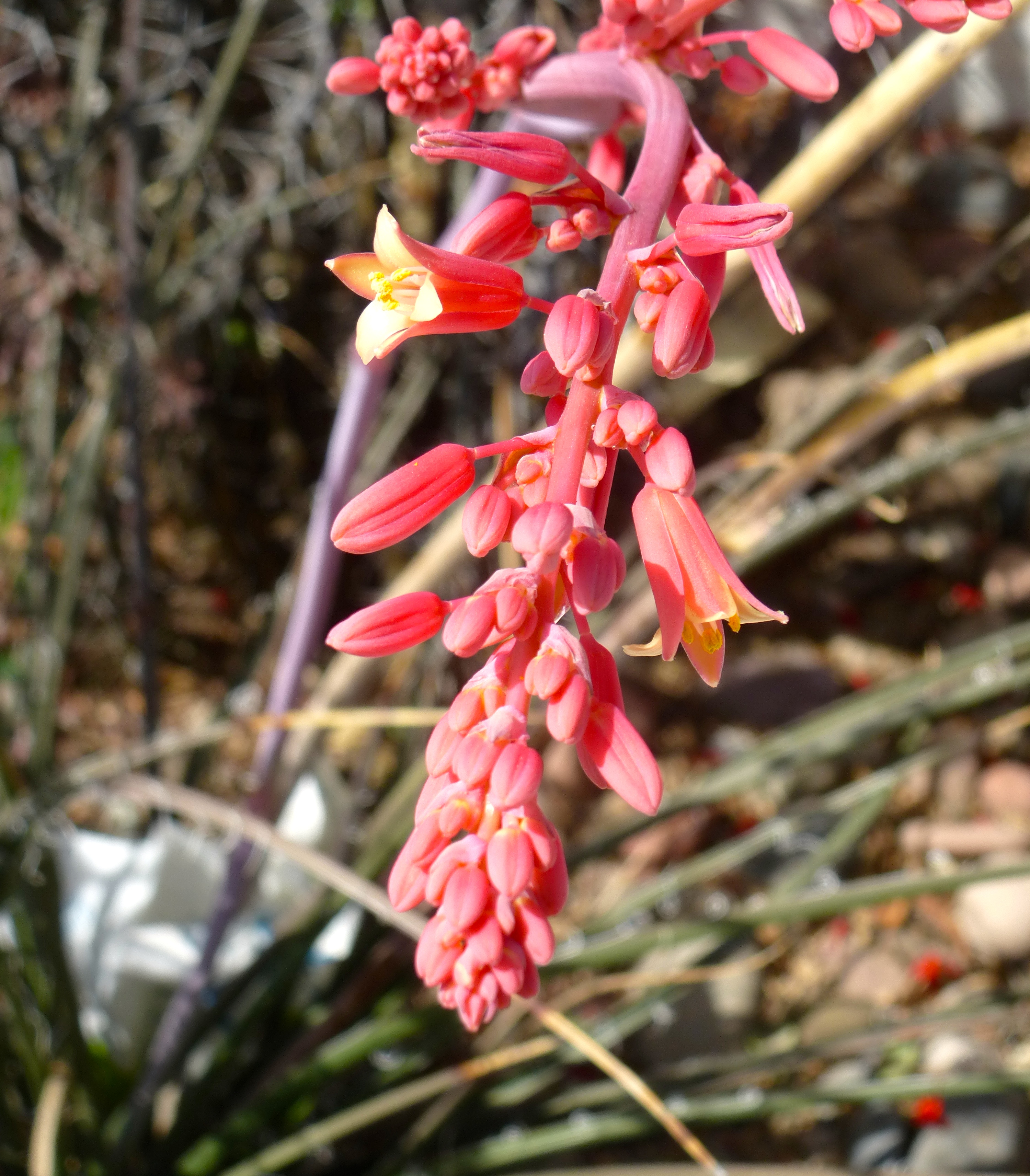 This native species (Echinocereus triglochidatus or Echinocereus coccineus; names differ) is variously called the  hedgehog cactus, kingcup cactus, claretcup, or Mojave mound cactus. It’s dioecious, meaning that plants are either male or female. I show both below: 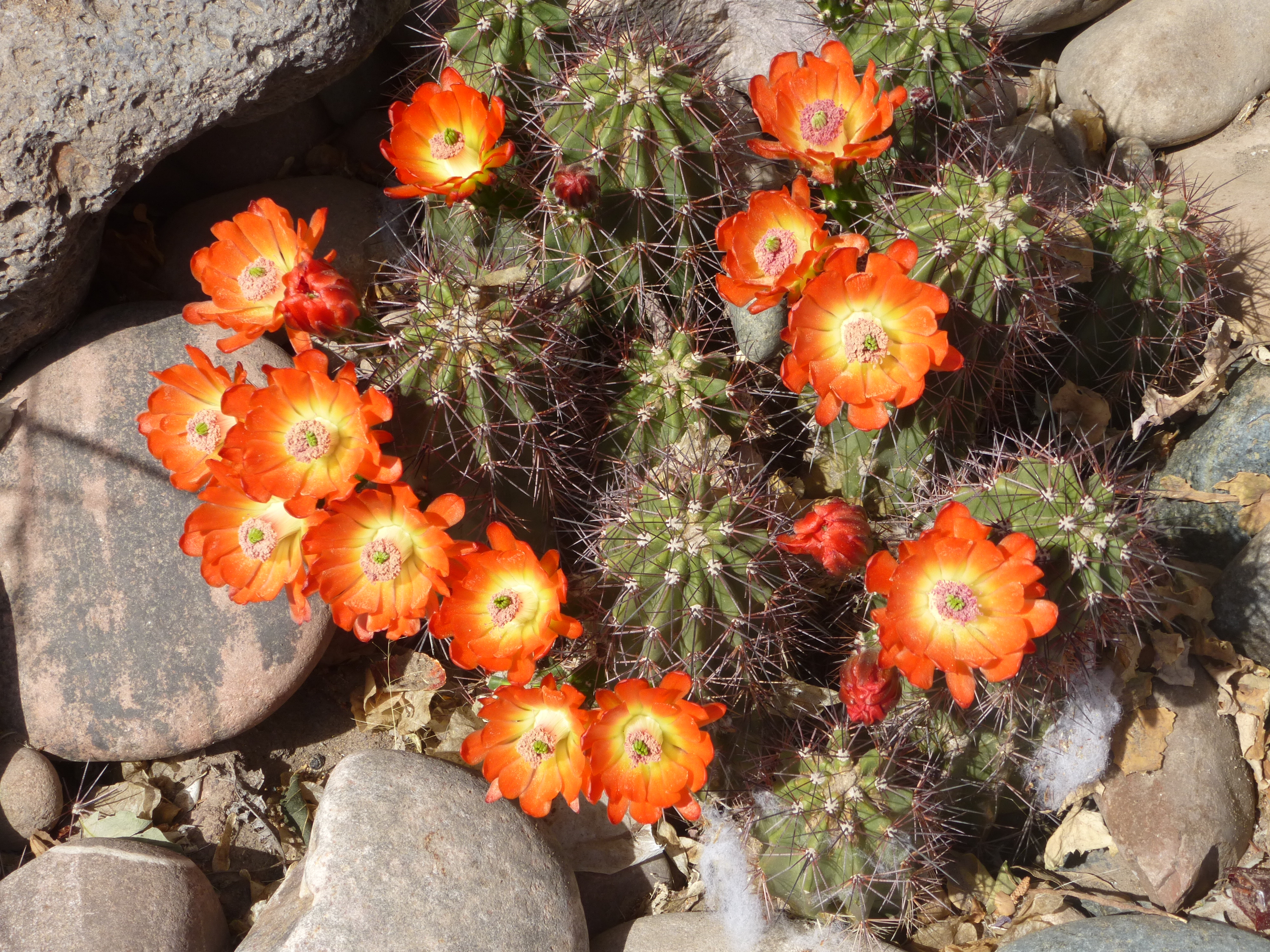 Here’s a female plant, whose pistils are extruded and ready to receive pollen, while the anthers (male bits) are nonfunctional and produce no pollen. 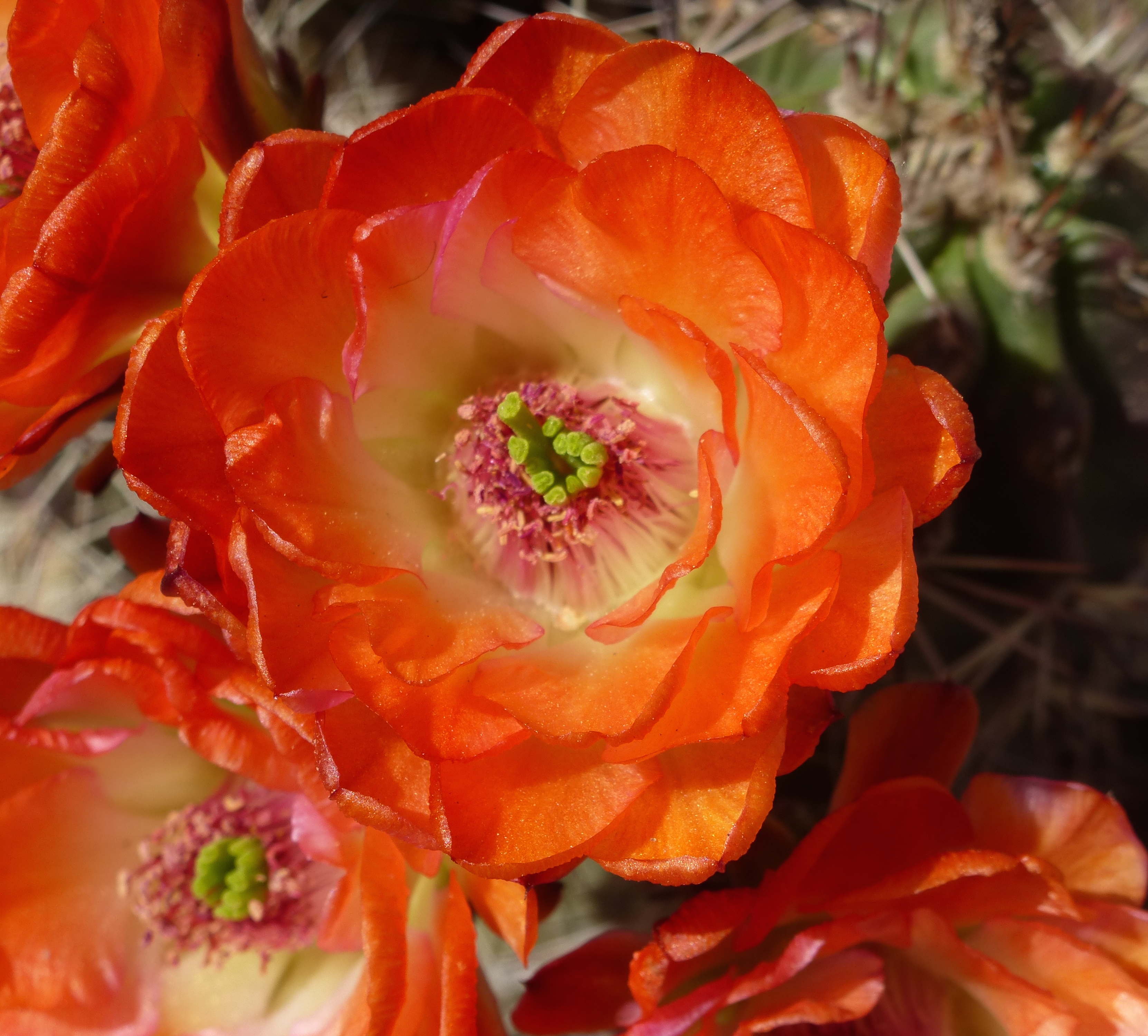 The male plant, with lots of pollen-bearing anthers but whose pistils are clustered together and unable to receive pollen. 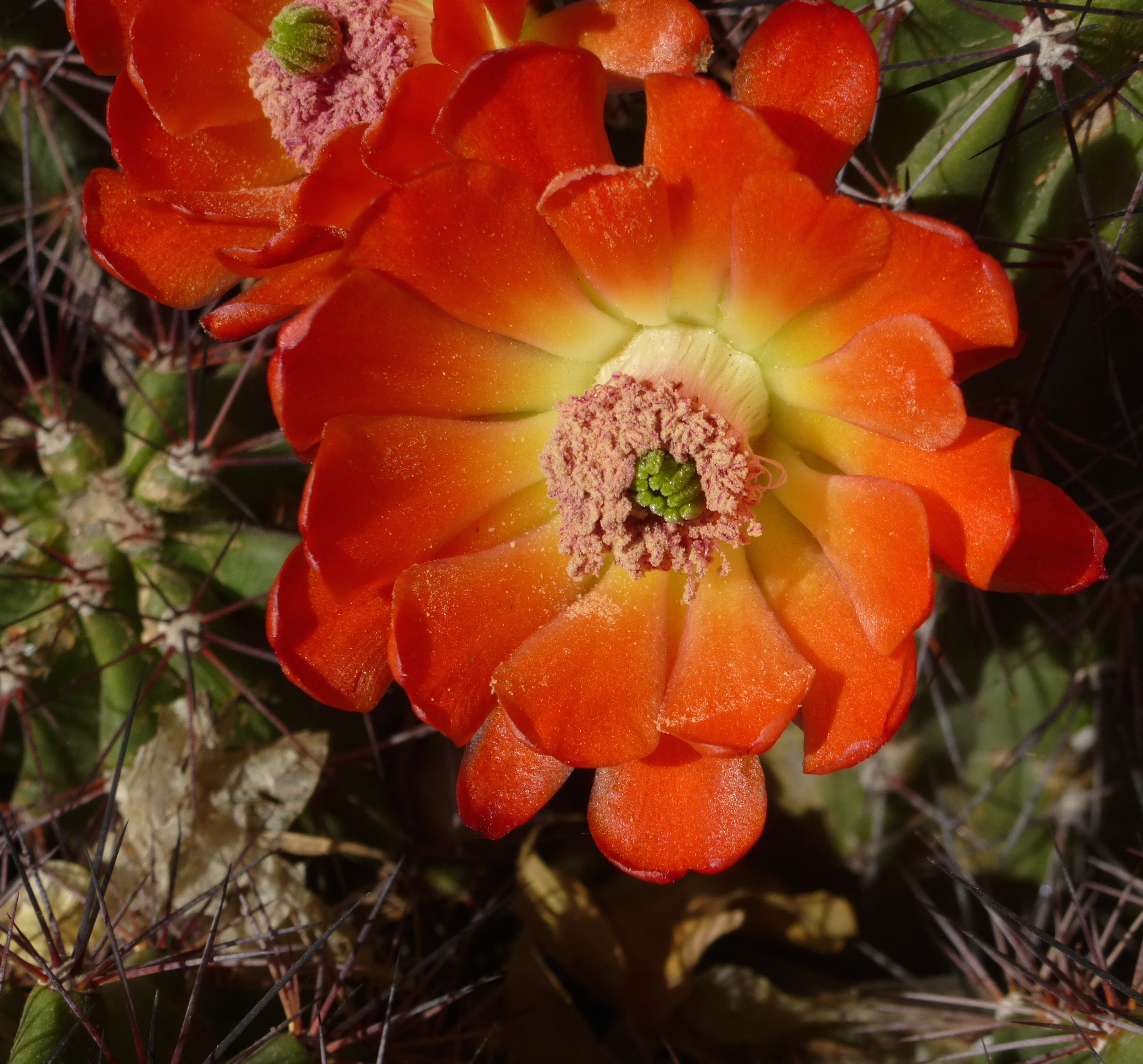 The Rio Grande River has diminished substantially by the time it reaches Las Cruces, as water is diverted to grow pecans, pistachios, and various vegetables. 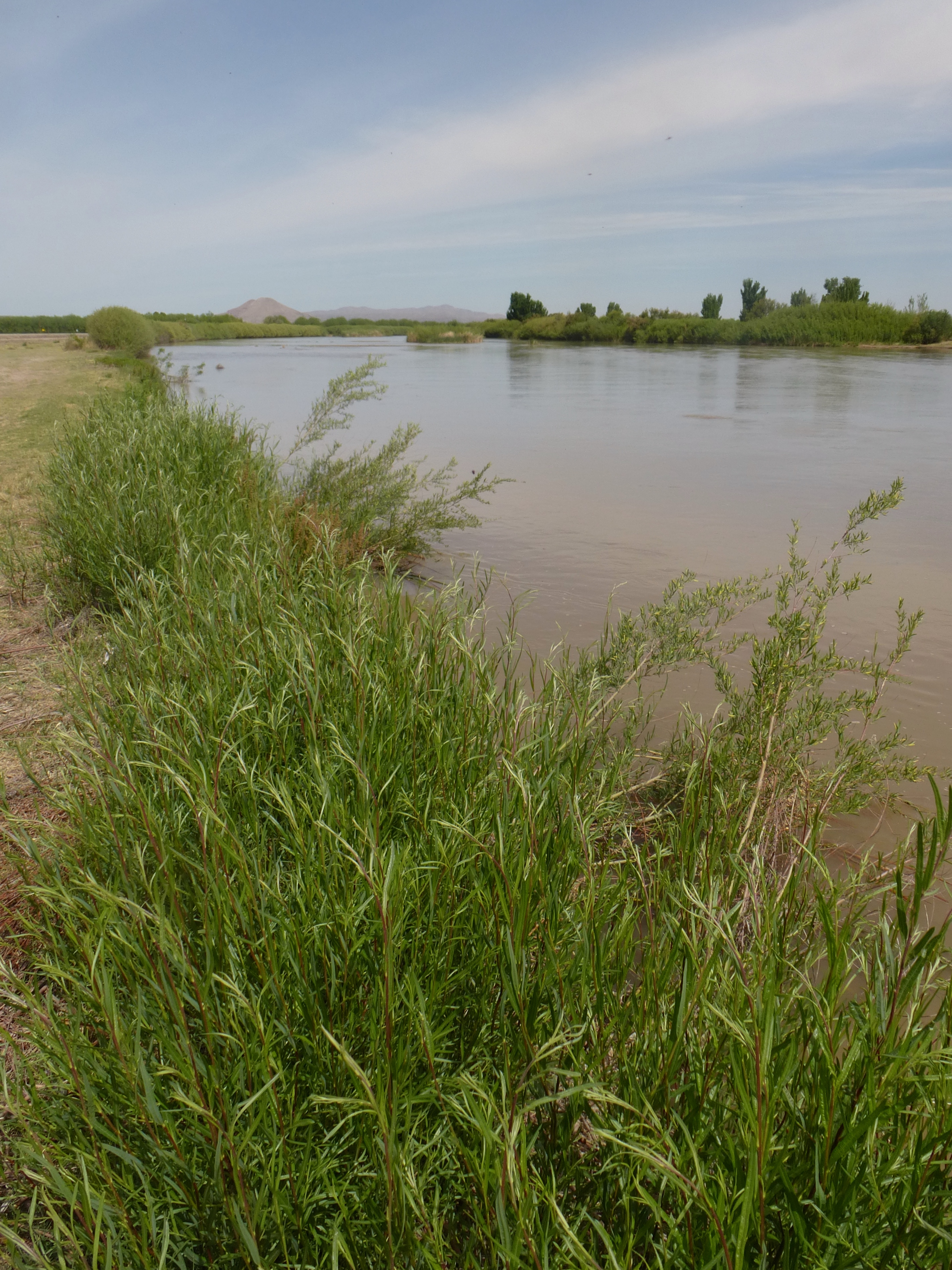 And a bunch of pictures of lovely Boris. Not to neglect his calico step-sister, I’ll post pictures of Janet in the next and last installment. 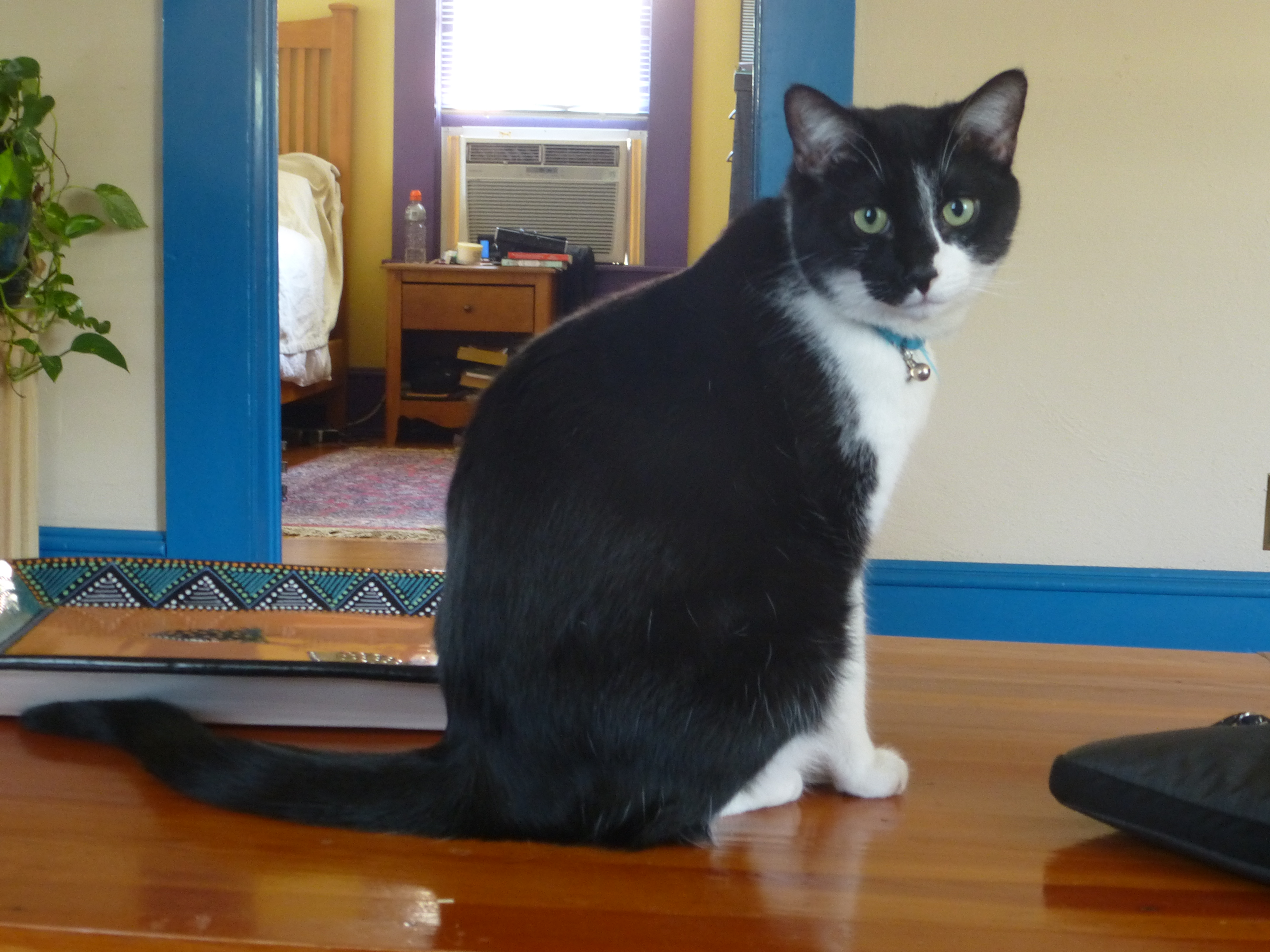 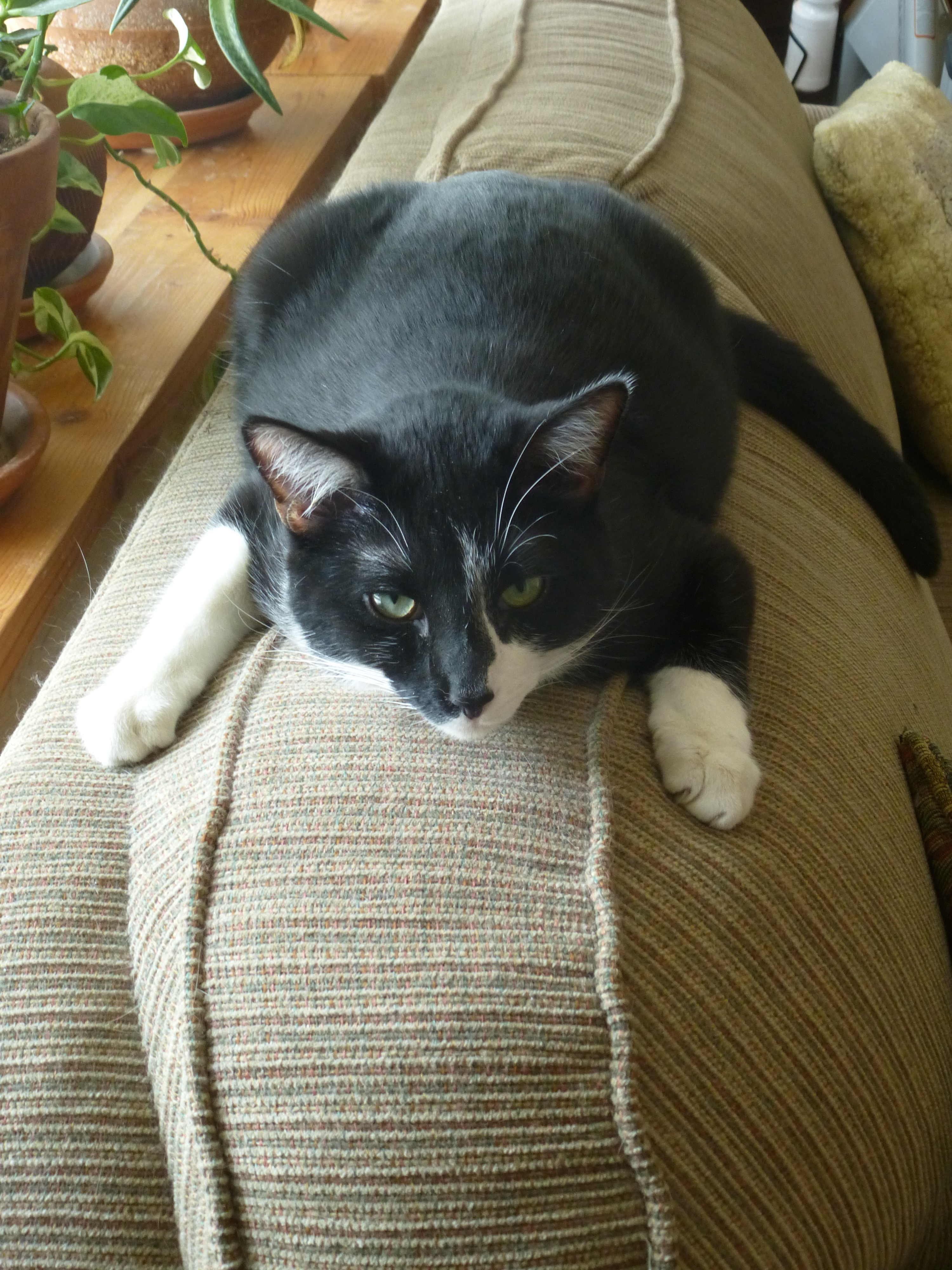 Yesterday when I was working at home, Boris slept between my feet: 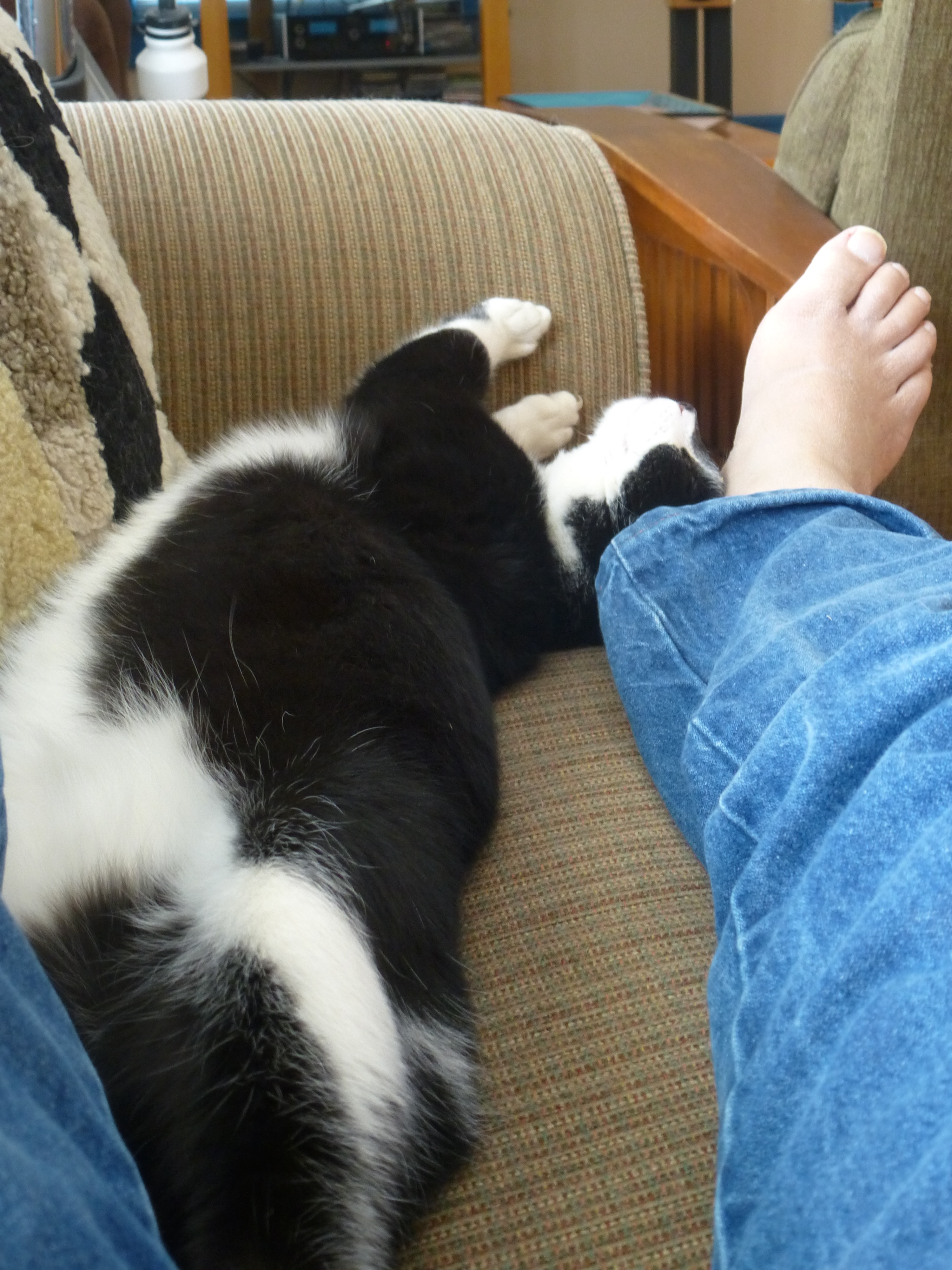 . . . and when I tried to take his photo, he played with the strap on my camera: 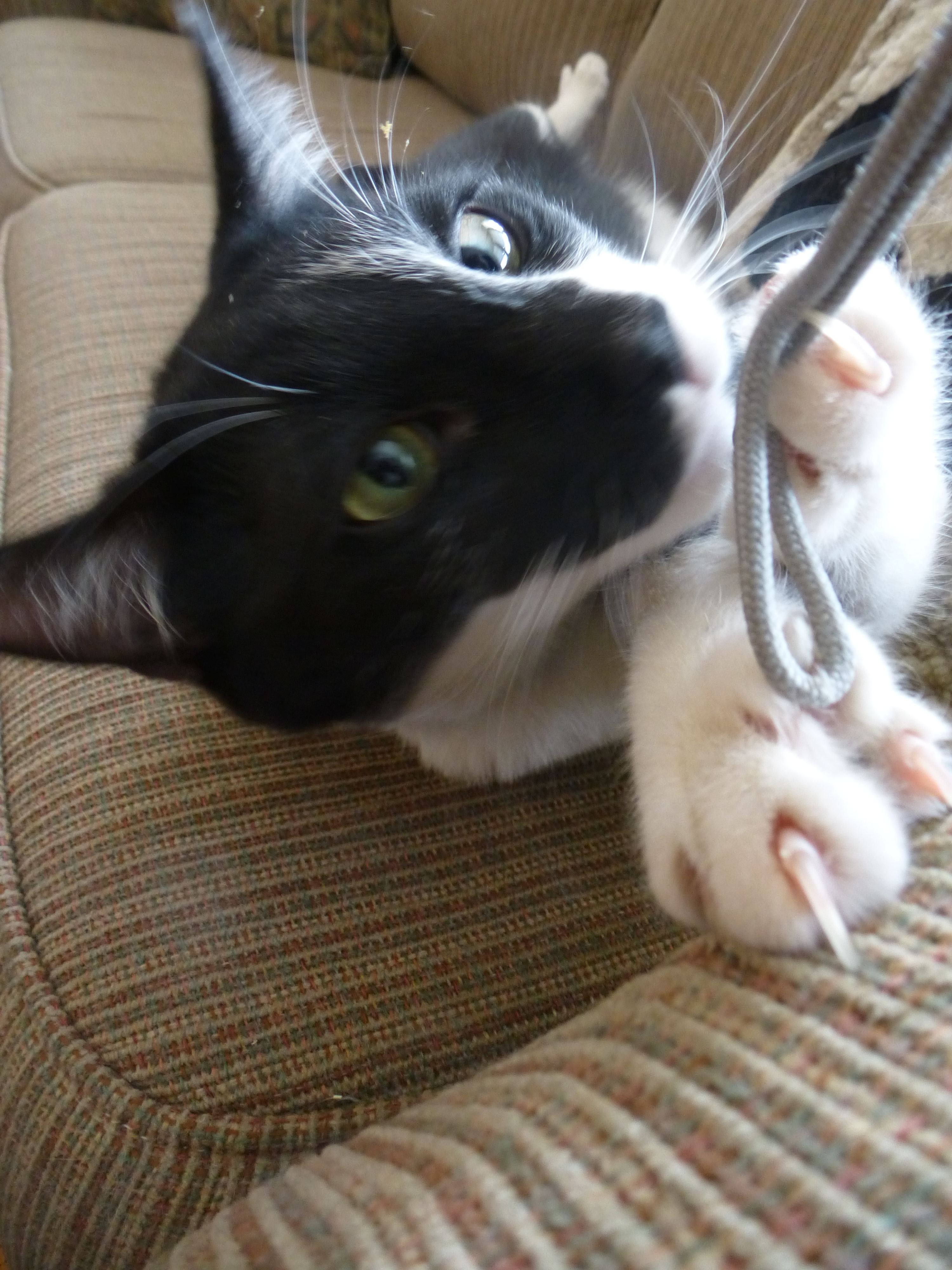 Cuddling him the night before, he bit my nose (it didn’t hurt too badly): 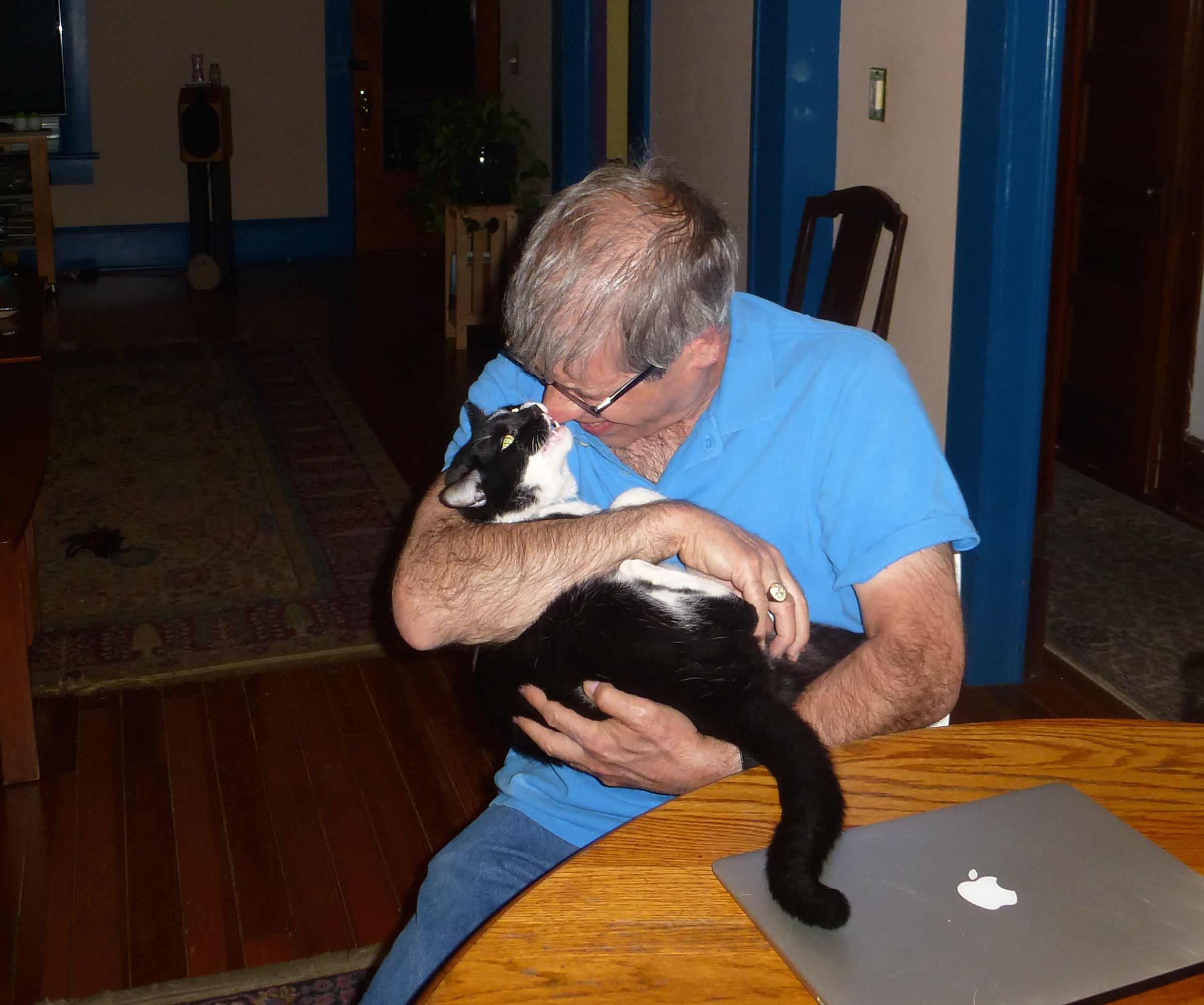 Last night we went to the Game Sports Bar and Grill to meet other faculty after the departmental seminar. There we sat in the outside beer garden, blissfully free of televisions and loud people. I had a local darkish beer, Scotia Scotch Ale (7.8% alcohol), as well as a local speciality: fried green chiles coated with crushed pecans. This is the Las Cruces equivalent of buffalo wings (ranch dressing on the side). They were great. It’s hard to have a bad chile. 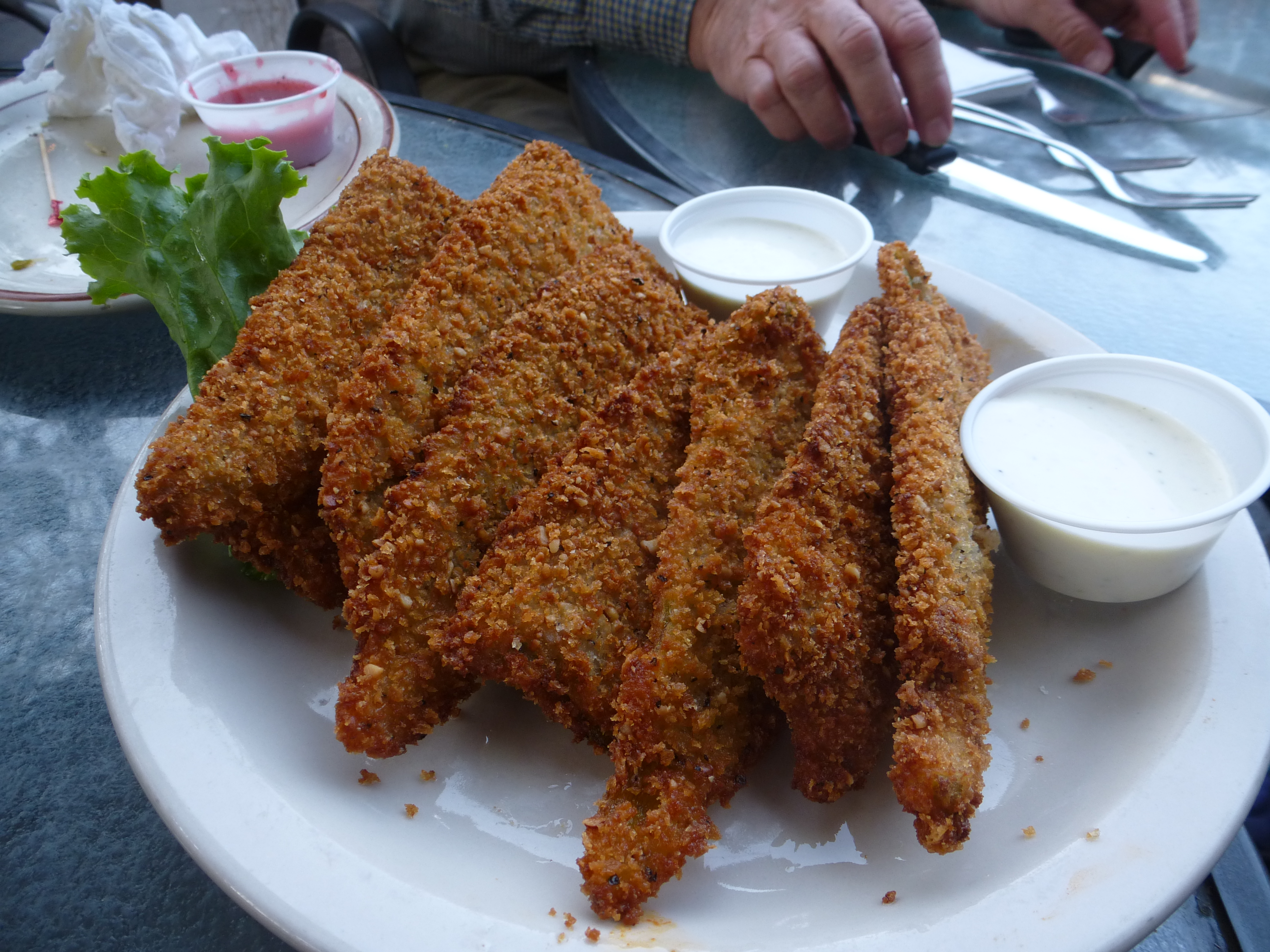 The inside of the chile: 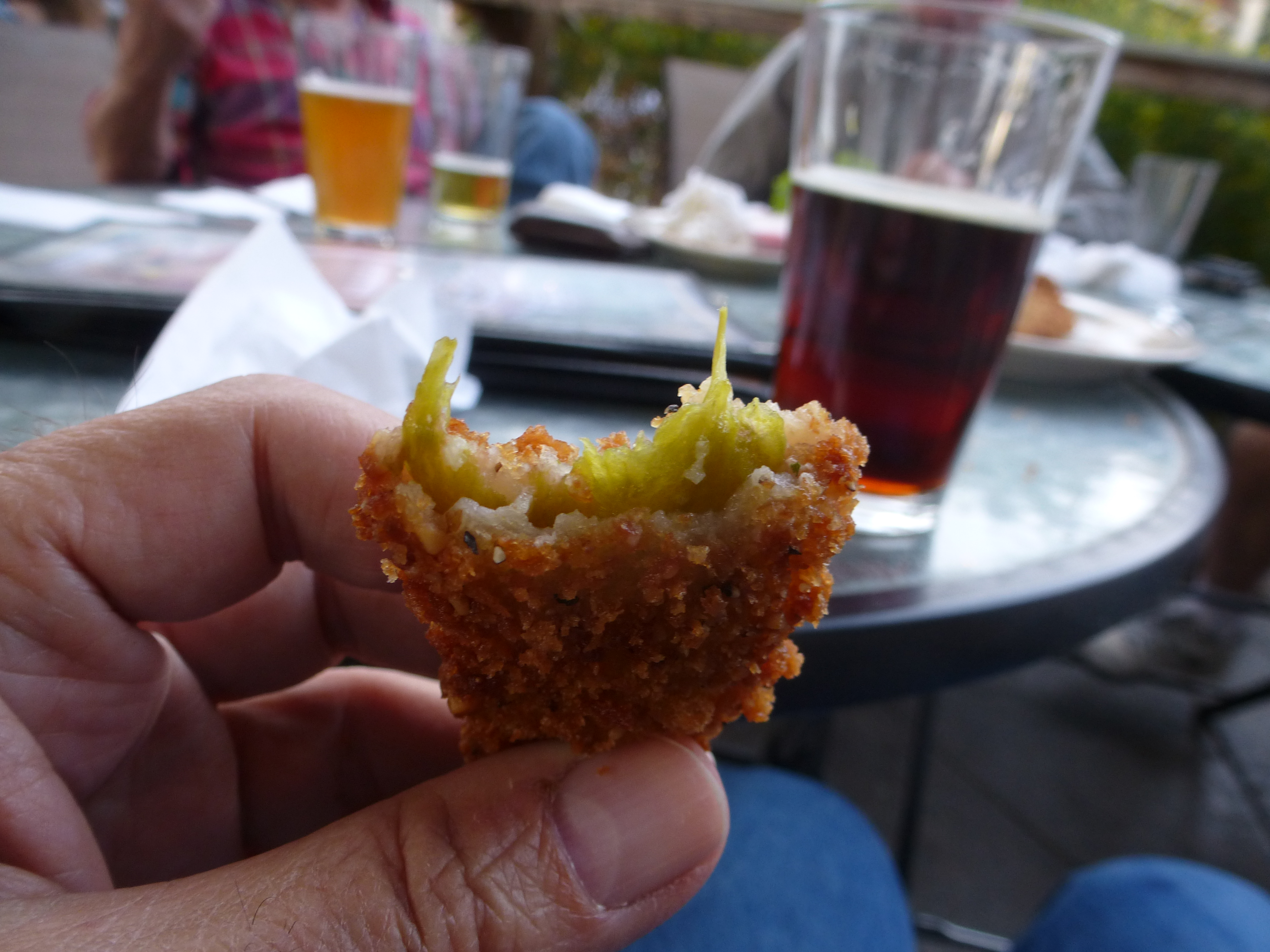 Some other people in the beer garden. I didn’t understand this tee shirt (I’m clueless) until it was explained to me that this meant “Hands off my daughter!” 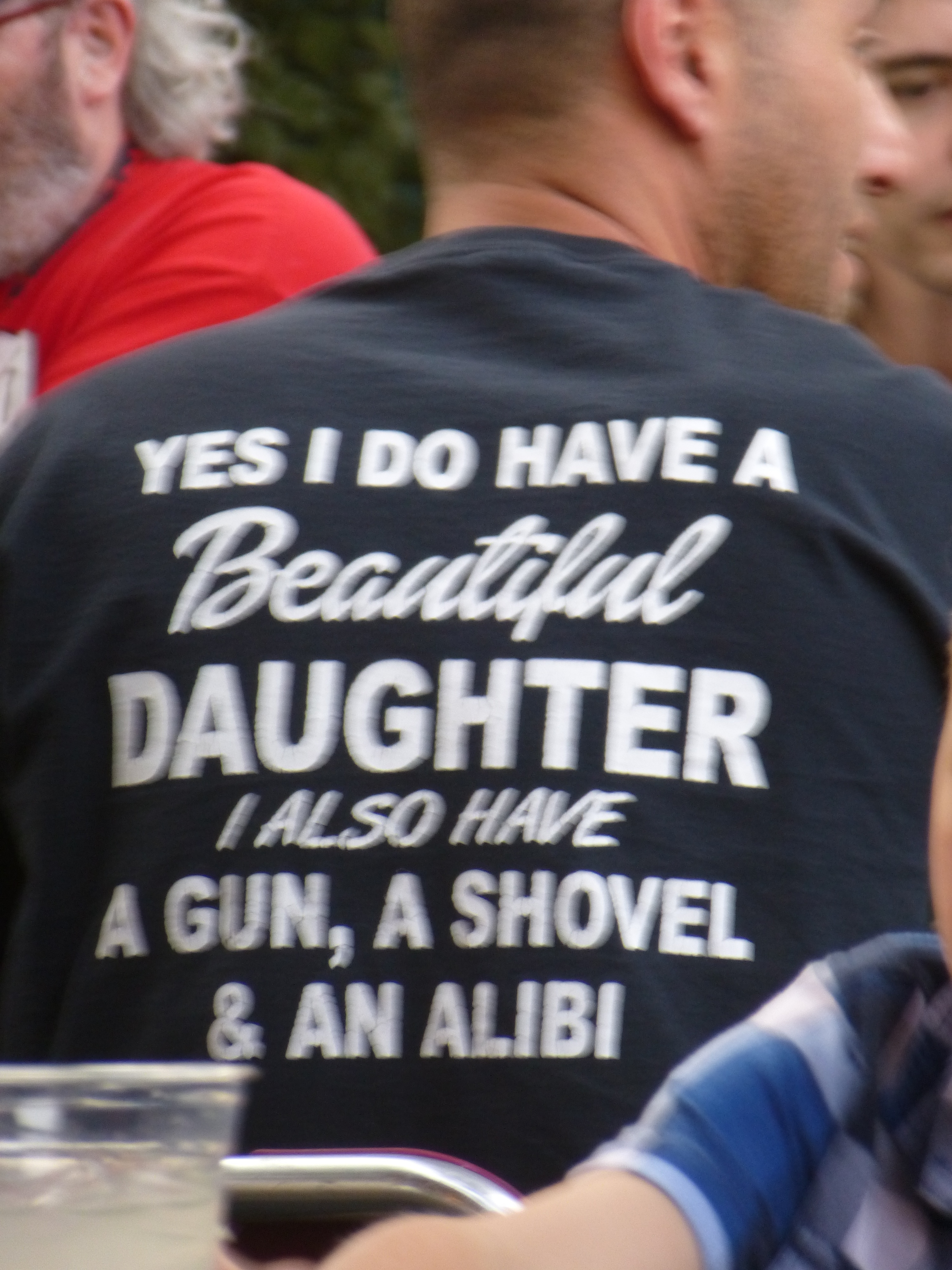 A woman nearby had “Slinky hair”, which would wiggle like a Slinky each time she moved. I am assured that this is her real hair: 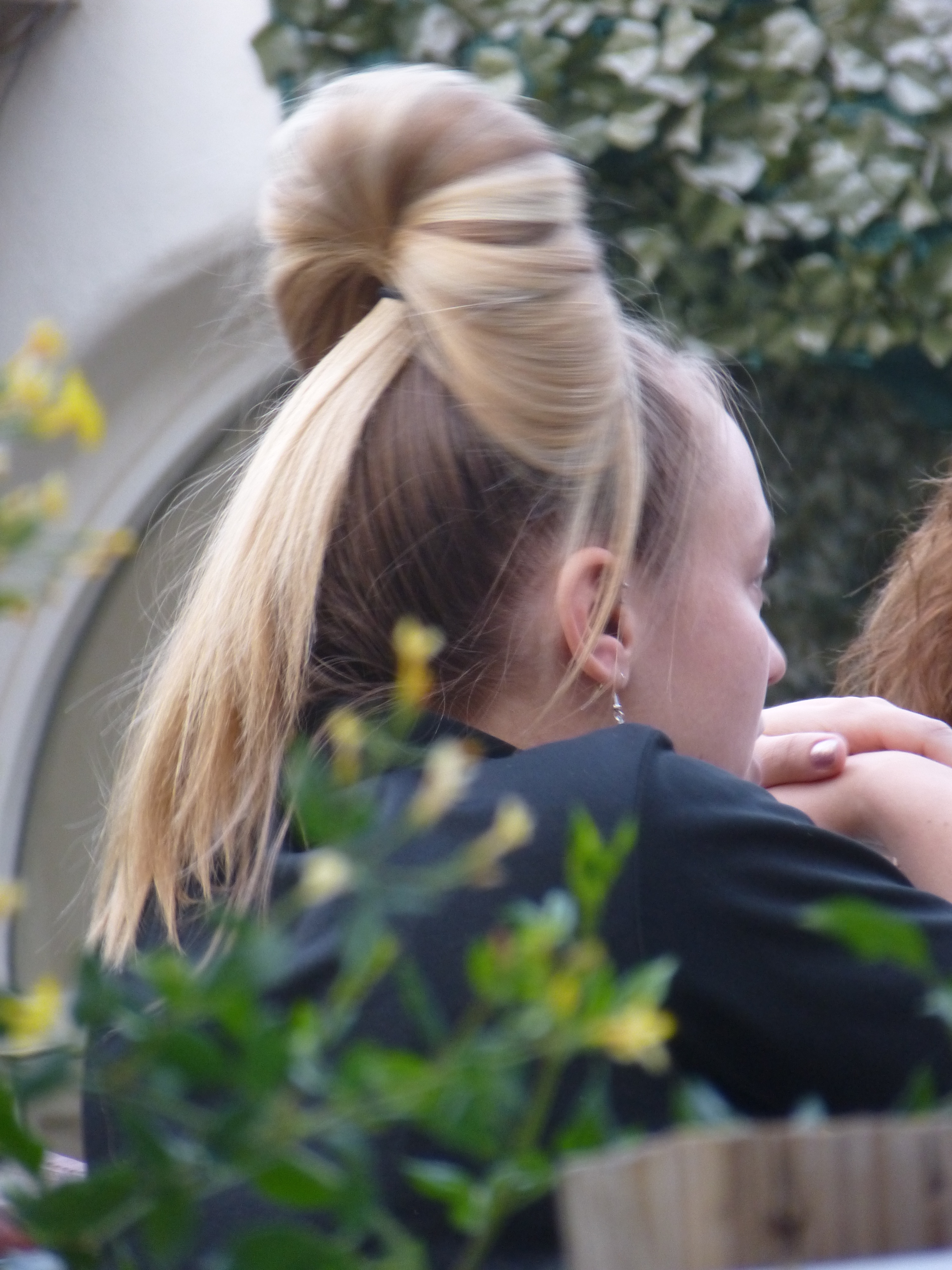 A lovely local woman with bird tattoos on her shoulder: 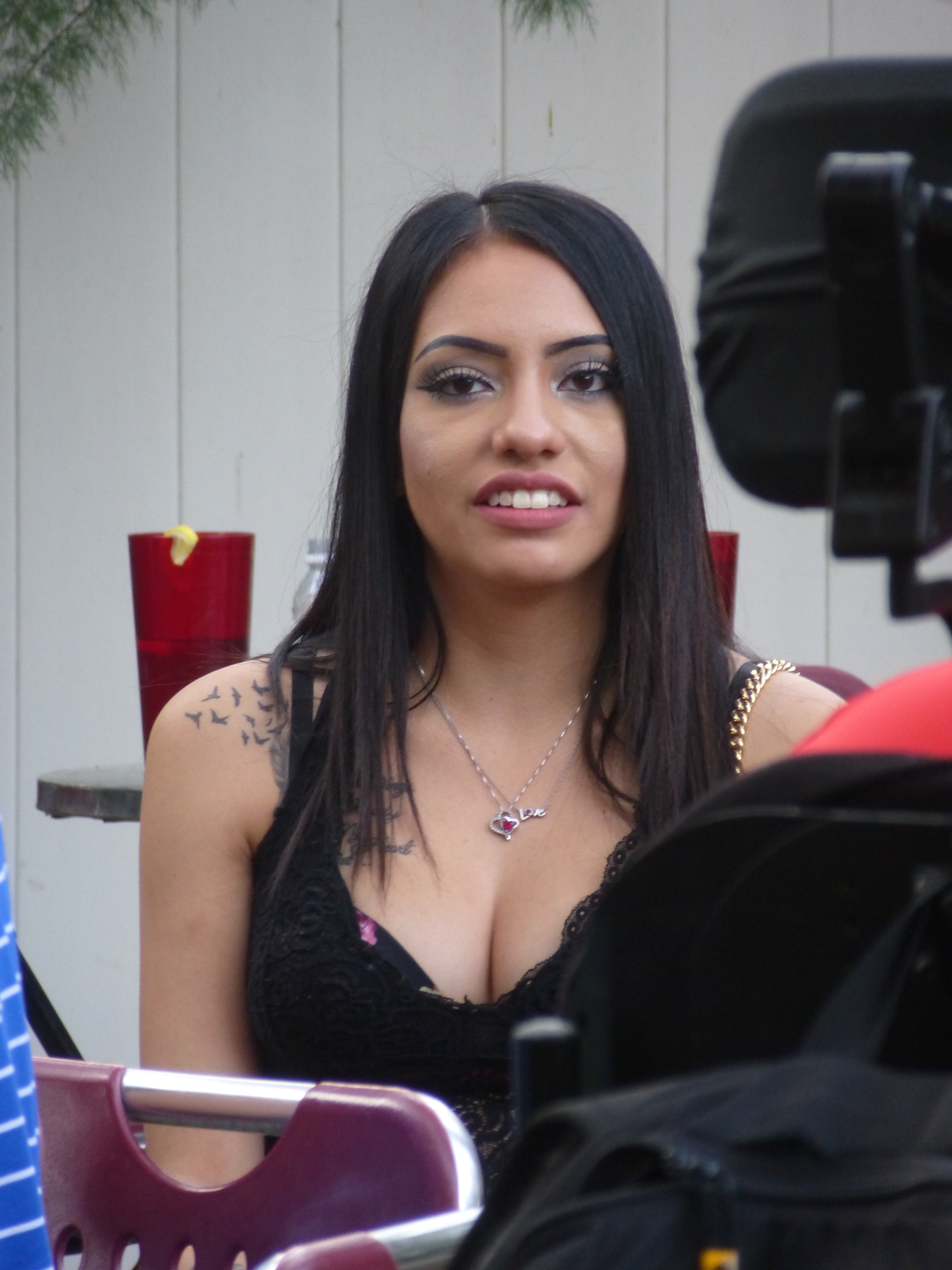 And a final shot of Boris, who’s wont to sleep all stretched out on his back. 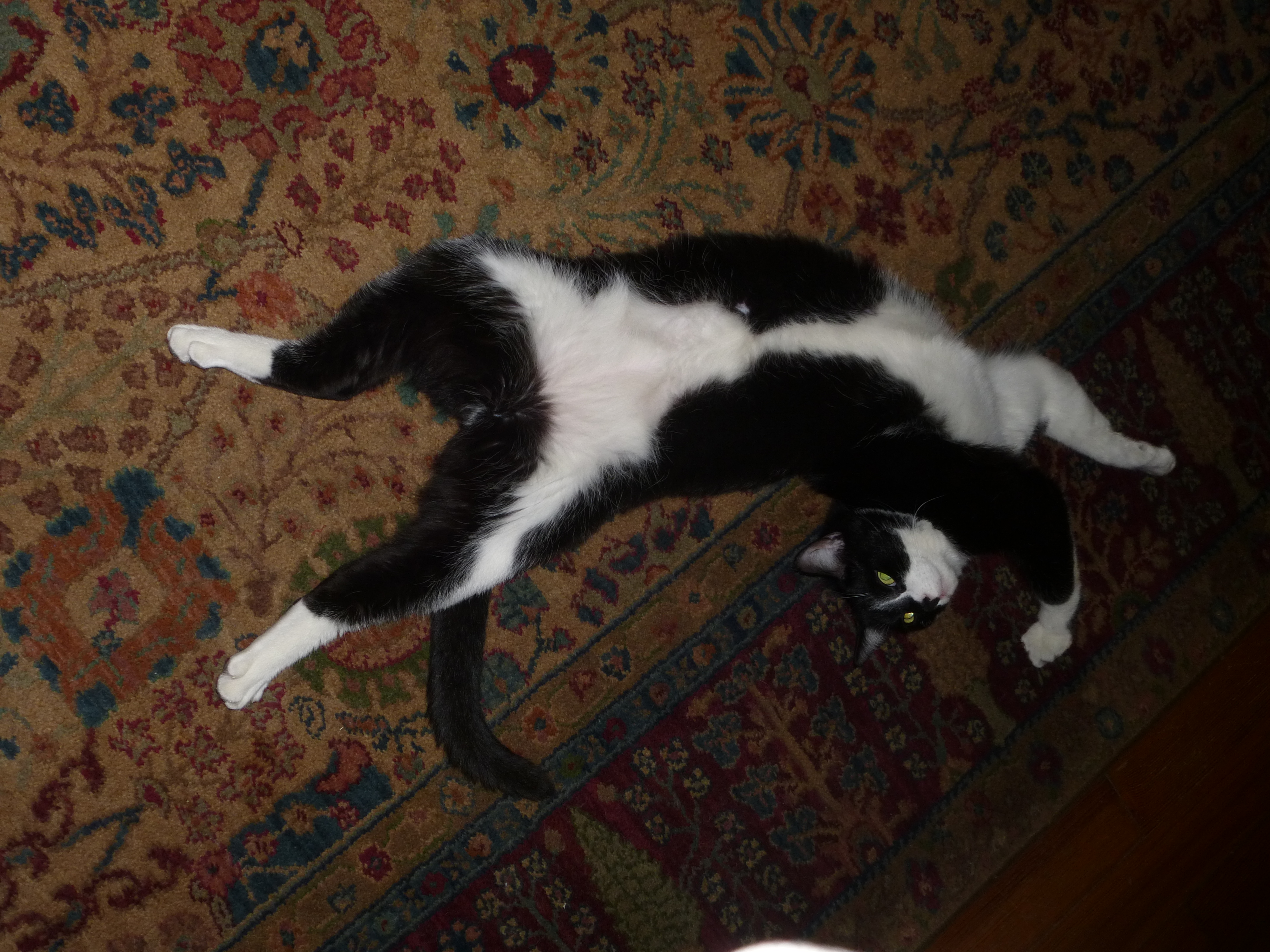 I’m returning to Chicago tomorrow morning, but I believe there’s one more post to go. Stay tuned for a pair of huge horned owls that live in the local Home Depot.