You know what? I don’t care if the paper below was published is a predatory journal, or an obscure journal or whatever: it still gives scholars the opportunity go cite a publication on their curriculum vitae, thereby advancing their careers.

I have no idea how Organization rates among scholars, but Wikipedia does suggest that it doesn’t rate badly, having a decent impact factor:

The journal is abstracted and indexed in Scopus, and the Social Sciences Citation Index. According to the Journal Citation Reports, its 2013 impact factor is 2.354, ranking it 36th out of 172 journals in the category “Management”.

Click on the screenshot to go to the pdf. The subject is what can be trawled, via postmodernist jouer, from Obama’s pet water dog Bo. The abstract gives you a taste of the rest: 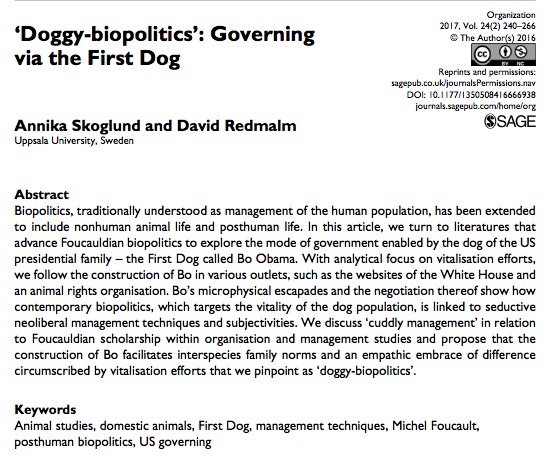 I struggled hard with excerpts of this paper, trying to find something in it worth saying or hearing, but what i got was this (an excerpt; my emphasis):

The direct interventions on Bo, rather than on the individual citizen, exemplifies how the rules of the game for self-crafting are reconfigured with both normative framings and an opening up of a less confined space, wherein individuals are activated to engage in dog-infused ethical decision making to be channelled anew (cf. Weiskopf and Willmott, 2013). Much akin to how Skinner (2013) describes the self-ethical process of becoming a ‘good farmer’ via the construction of the ‘organic’ within a community, but in our case without as direct enterprising bents. That is, Bo is not mainly offering us to become better at economic cost benefit analyses on how to ‘invest’ in certain practices to optimise ourselves as human capital (du Gay, 1996; Weiskopf and Munro, 2012), neither is Bo teamed up with instrumental self-quantification measures to regulate our intentions to enhance biospheric vitality (Chandler in Chandler and Reid, 2016: 27–49). Rather, Bo’s presence in the White House, in the media and in political debates extends the biopolitical self-regulative agenda to what we conceptualise as ‘doggy-biopolitics’, a power exercised in relation to the optimisation of dogs en masse.

Bo is an especially powerful instrument of doggy-biopolitics as he can fulfil the role of a humanlike person with a close personal relationship with the members of the First Family, whereas he can also be biologised when characteristics traditionally associated with dogs are needed: liveliness, loyalty and honesty. In contrast to previous First Dogs, Bo is not merely invoked as a rhetorical resource used to meet arguments in a conflict, but is construed as a person with a voice and feelings of his own, invoked by alternative voices to shape and scrutinise presidential subjectivity. As dogs are generally thought to be honest by nature, Bo can be said to be the perfect litmus test for truth.

All I can glean from this is that Bo alternated between the roles of “dog” and “anthropomorphized pet”, and that’s about it. The rest of the paper, which goes along similar lines, is at your disposal—and I suggest that literally.

When I read this, the thought came to mind, “Why, this obscurantist nonsense is just like religion!” And then I realized that that was indeed true: postmodernism is a sort of religion. It has its gods (Foucault, Derrida) whose behavior and scriptures are sacred;it cares not a whit for what is true, but rather is concerned with a twisted form of tribal bonding; it takes up space and wastes people’s time; it makes decent careers for people who are unsuited to do anything meaningful (viz., theologians), and it engages in arrant obscurantism, using a special and tortuous jargon to confound regular people. Indeed, its purpose is not to be understood by us regular Joes and Jills, but to speak to others in the faith, and, by saying the right things, join the tribe and “construct” a career.

Those of you who have the stomach to read the whole paper, and find its nugget of truth—if there is one—by all means weigh in below. But my quick reading convinces me that this is just like Feminist Glaciologyor racist white Pilates.

Well, at least the paper’s figures have pictures of Bo, so you can see a dog if you like canids. Here’s Figure 5: 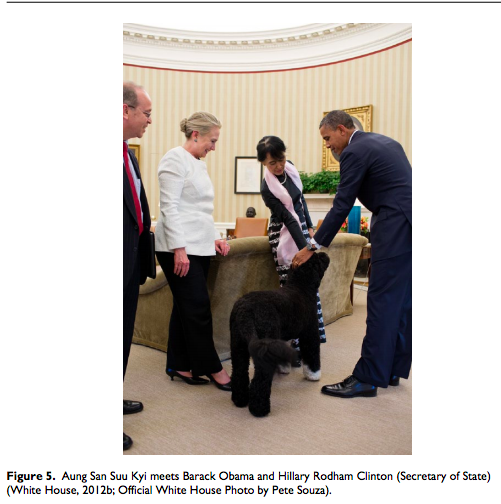 h/t: Maarten, who wrote of the journal: “My dog could get published in there, and I don’t even have one!”

He added, in his cover email:

So when Bo Obama was fetching a football, the canine was in fact complicit in an evil plot to entrench the Foucauldian hegemony of the neo-liberal order. Or something to that effect.
Have fun!

52 thoughts on “Paper of the month: Postmodernists on “doggy bio-politics” as exemplified by Obama’s Water Dog Bo”