Note from Jerry: Greg plans to run a mini-MOOC here, so if you want some education in evolution, do the readings and answer the questions (to yourself). This is the first installment.

This semester I’m teaching BIOS 314 Evolutionary Biology, an upper level undergraduate course. The students are all or mostly biological sciences majors, and general genetics and biostatistics are prerequisites for taking the course. As a textbook, I use Evolution, by Doug Futuyma and Mark Kirkpatrick, published by Sinauer Associates of Sunderland, Mass., which last year became an imprint of Oxford University Press. This is the 4th edition of the current iteration of this text, which also had 3 editions under an earlier iteration with the title Evolutionary Biology. Doug was my undergraduate evolution teacher, and I took the class with him while he was writing the first edition of Evolutionary Biology.

I hope to say more about the textbook later, but I also have the students read a series of what I regard to be classic papers or extracts– one each week–and these are what I want to share with WEIT readers. Each reading is accompanied by a brief biography and illustration of the author, and a small number of study questions, designed to guide the student in understanding the reading. I sometimes assign these questions as homework essays, or include them on exams. The first week’s reading each time I’ve taught the course this way has been an extract from the Origin. I will, when possible, provide links to the readings. For this Darwin reading, you can use John van Wyhe‘s superb Darwin Online. I’ll be posting a reading every few days. If you want to read along, it will be like taking a guided readings course in evolutionary biology. 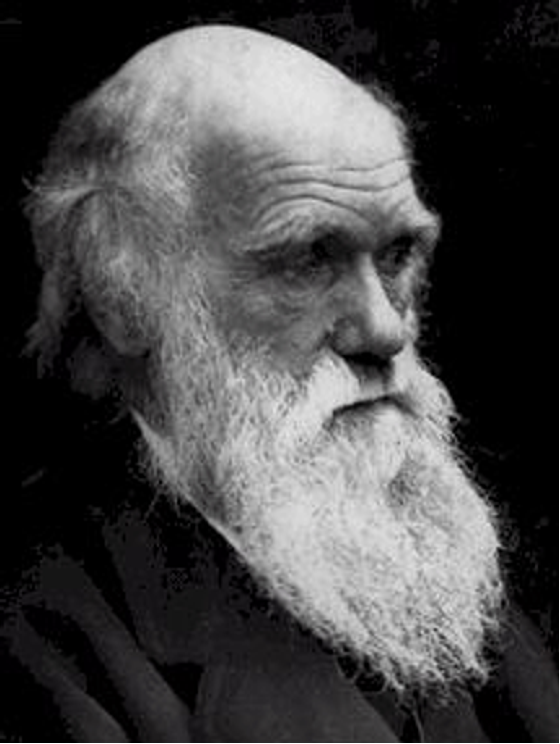 Charles Darwin (1809-1882), after studying briefly at Edinburgh to be a physician, went to Cambridge to prepare for the Anglican priesthood. While there, his interest in natural history attracted the attention of his professors, which led to him being invited aboard H.M.S. Beagle as a supernumerary naturalist for that survey vessel’s global circumnavigation (1831-1836). By the time he returned he was already a recognized geologist, and, leaving the ministry behind, he soon established himself as a rising star in all departments of natural history. After study of his Beagle collections convinced him that species were not immutable, he discovered natural selection as a means of modification. Spurred by the later but independent discovery of natural selection by A. R. Wallace, he published his views and evidence in On the Origin of Species in 1859. Within a few years, the whole of the scientific community accepted descent with modification as the key process underlying the phenomena of the organic world, though natural selection as the chief means of modification was not accepted during Darwin’s lifetime. Among his many other works are Zoology of the Beagle (1838-1843, edited by Darwin), Voyage of the Beagle (2nd ed., 1845), Variation Under Domestication (1868) and The Descent of Man (1871). All of Darwin’s published works are available at John van Wyhe’s Darwin Online, http://darwin-online.org.uk/. He is buried in Westminster Abbey, not far from Sir Isaac Newton. The best biography is Janet Browne’s Charles Darwin (vol. 1, 1995; vol. 2, 2002).

1. Why is the concept of homology crucial for even being able to talk about organic structure? How are homologous organs recognized? What is Darwin’s explanation for homology?

2. How does Darwin’s account of serial homology (the resemblance of parts within an organism, for example, the forelimbs to the hindlimbs, or of a cervical vertebra to a thoracic vertebra) depend on the repetition of parts or segmentation?

3. What is the “law of embryonic resemblance”? How do these resemblance relate to the organisms’ conditions of existence? How does this relation depend on whether the embryo is active and provides for itself?

4. When during development does Darwin suppose most species differentiating characters to become evident? How does this relate to when he supposes the characters to affect the survival and reproduction of their bearers?

30 thoughts on “Teaching Evolution: Darwin: Unity of type and adaptation”