I’m back from SE Asia, but am horribly jet-lagged. It will take me a few days to recover and resume posting as usual. In the meantime, enjoy this comic.

The new Jesus and Mo strip, called “furry”, shows Mo raising a few dumb creationists questions about evolution, although the “Why aren’t there furry Eskimos?” issue is new to me. (The word is “Inuit,” now, and they didn’t need fur because they had clothes.)

The good news is that, after a five-year effort, Why Evolution is True will, I’m told, soon appear in Arabic. I’ve long wished for this, for the Arab-speaking world is largely creationist, and I’m pretty sure there are no books in Arabic laying out the evidence for evolution. At any rate, the Egyptian National Center for Translation has done the job (it was interrupted during Arab Spring), and we’ll have an edition in that language within a month or two.

So, Jesus and Mo and evolution: 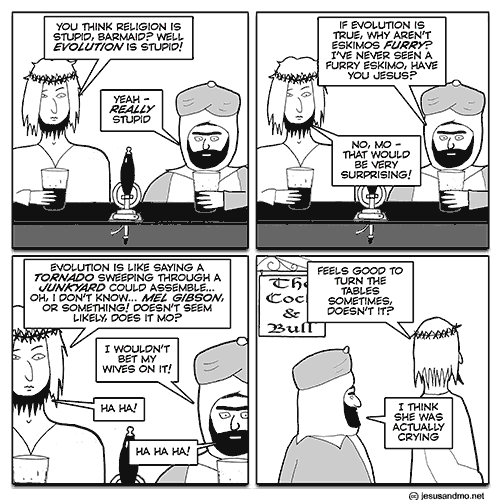