There are two reasons why a visit to Singapore is a goal of all true foodies. First, it offers the food of many cultures, as this small country (720 km²) is a mixing pot for both people and cuisine. On tap: Malaysian food, Chinese food, Indonesian food, Indian food, Indonesian food, Buddhist vegetarian food, and even some remnants of British food, as in my breakfast below shows. Second, virtually all the famous dishes of this land are available at “hawker centres”, where dozens and dozens of small stalls occupy large open-air markets, lining corridors in which there are tables. Many stalls specialize in only one type of food, like fish soup, chicken rice (which can be considered the national dish of this land), and so on.

You simply go to one or more stalls, pick up your dish or dishes, and take your grub to a table. With a group, you can sample many different dishes at a single meal. The dishes are relatively cheap, too: between $4 and $6 Singapore for a large dish, with one Singapore dollar equal to about 0.72 US dollars.

When I arrived at Changi Airport at 6:30 a.m., pretty well rested, my friend Melissa Chen and her lovely parents Michael and Annie met me, and they wanted me to begin my visit with a genuine Singapore breakfast. Fortunately, Terminal 3 in the airport has a real hawker centre right on the spot, and that’s where we went.

Breakfast included classics, clearly influenced by the British but with a local twist. There was with condensed milk and sugar (invariably called “Coffee C” C” as opposed to “Coffee O”, which is black coffee. If you say “coffee” by itself, you get coffee with milk instead of condensed milk, and also with sugar.) Alongside the Coffee C below are two very lightly fried eggs, so runny that they become a soup when you break them up. Those are served with some soy sauce and a sweet soy-ish sauce resembling hoisin sauce.

The coffee beans here are often roasted in a wok, sometimes with sugar and margarine or pineapple skin, and then brewed by pouring hot water through a sock-like cotton strainer (called, of course, a “sock”). The Singaporeans are justifiably proud of their strong, tasty coffee. 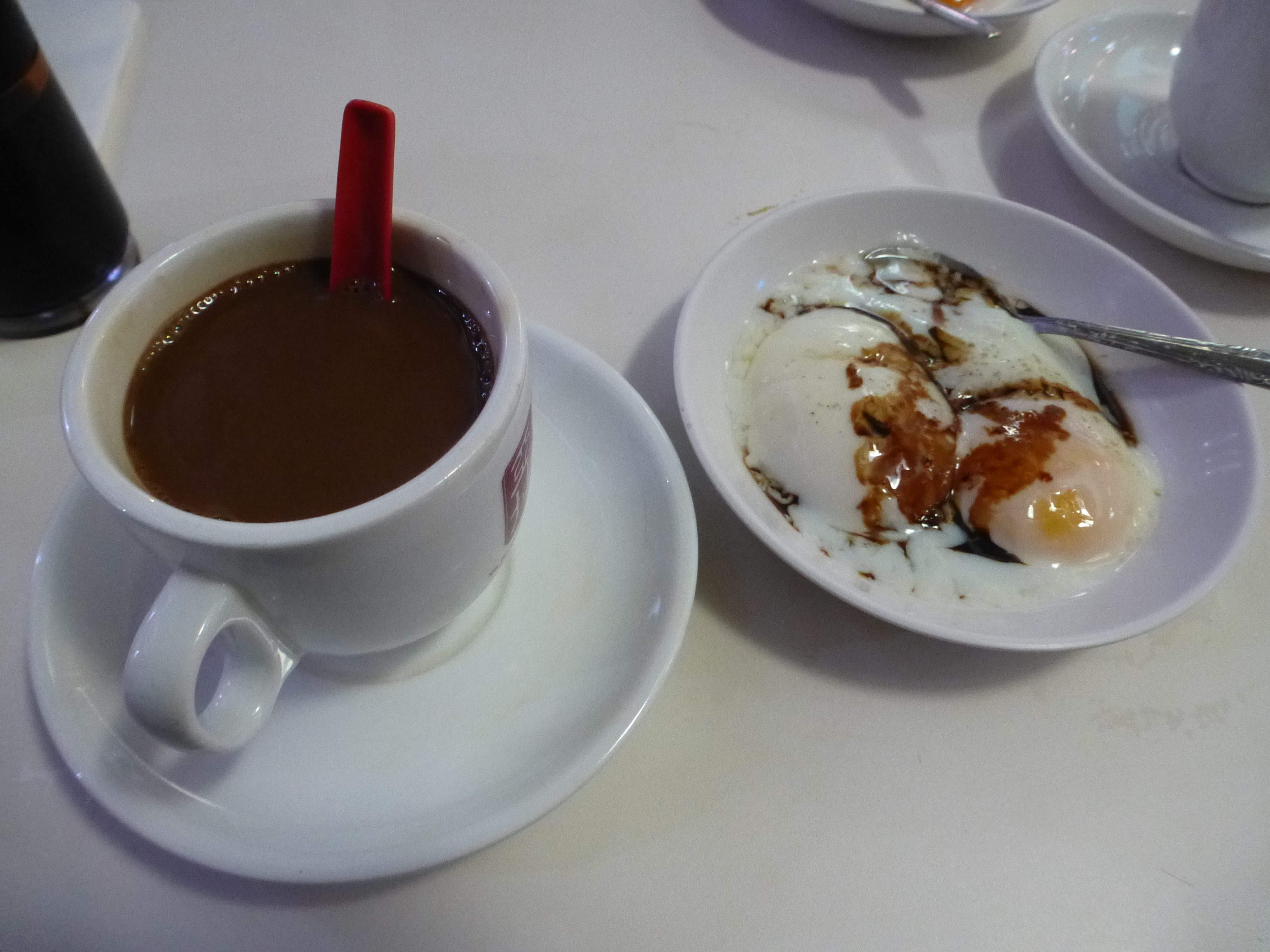 The eggs, beaten up with some soy and hoisin-like sauce. 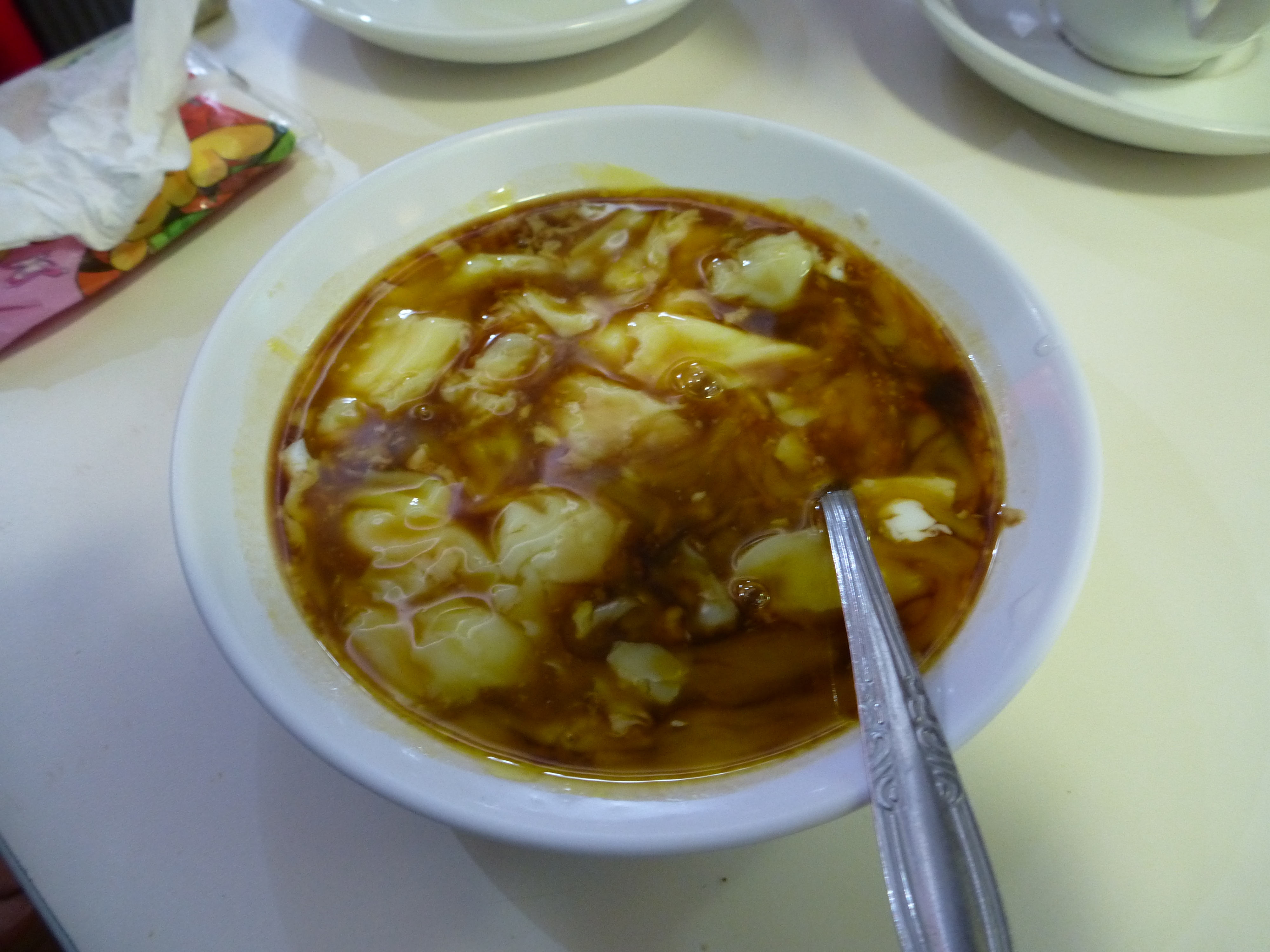 Alongside is another local classic, “kaya toast,” made by taking thick slices of bread, cutting them in half to make them thinner, and then frying them and covering them with butter (lots of it!) and a jam made from coconut milk, eggs, sugar, and pandan leaves (Pandanus amaryllifolius). Pandan leaves are ubiquitous, and impart a green color and fragrant note to many sweets as well as being a flavoring agent in many regular dishes. 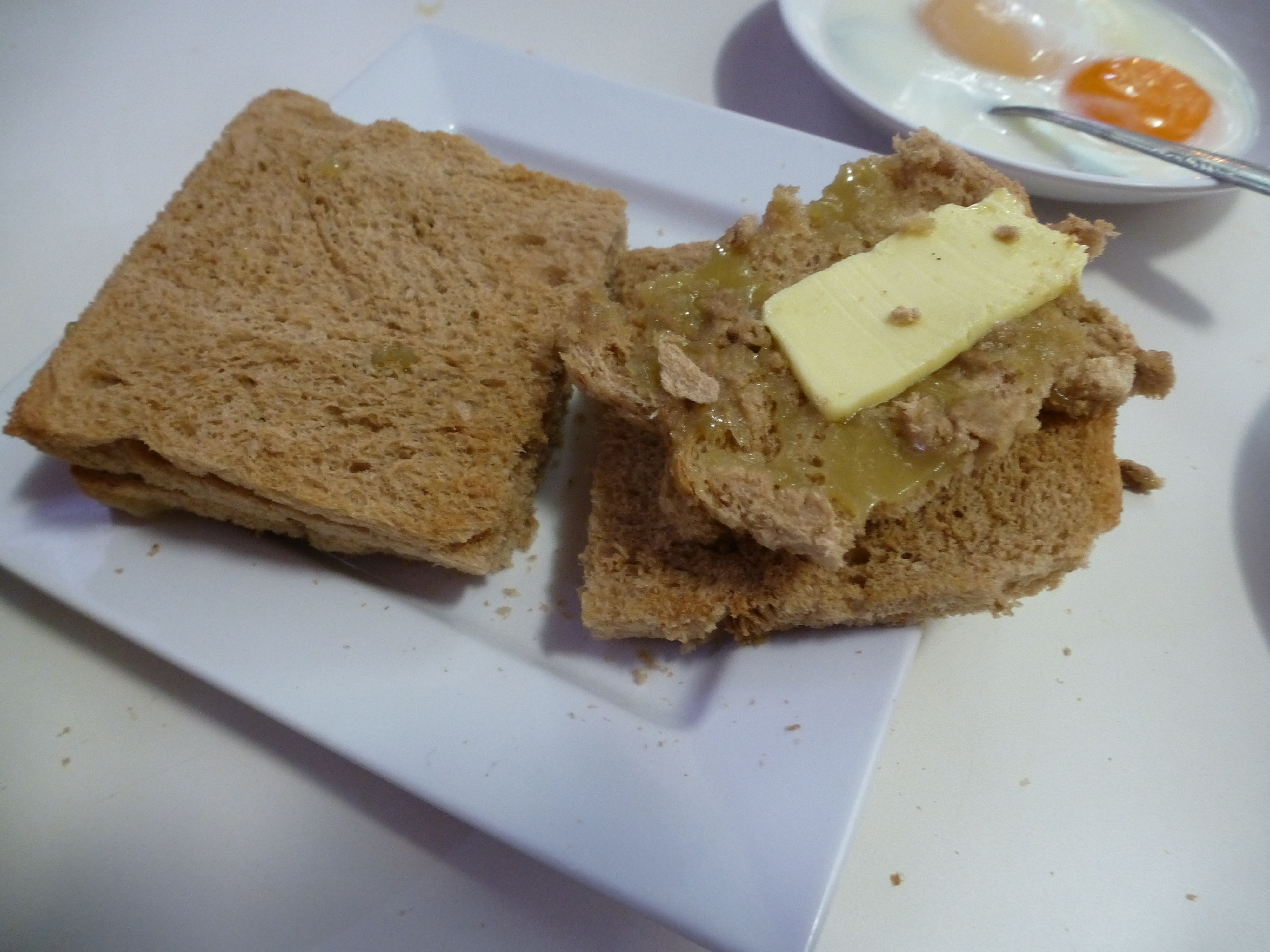 Frying the bread for kaya toast: 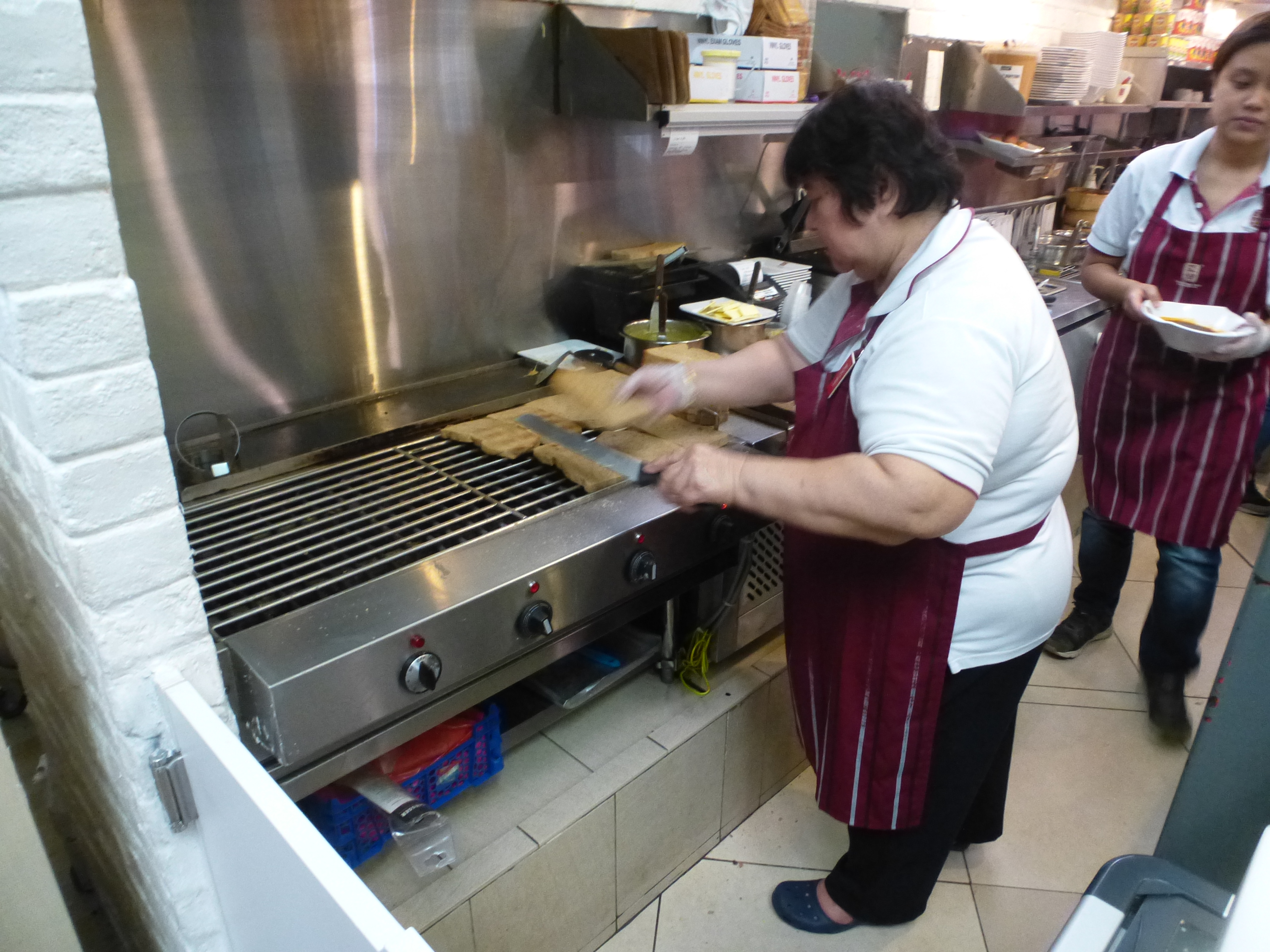 Michael had another Singapore staple eaten for both breakfast and lunch: mee siam, thin homemade noodles in a tasty and spicy broth with lime, shrimp, egg, bean sprouts, tofu, peppers (the black pile that looks like caviar just below the egg) and many other goodies. It’s like amped-up ramen noodles. 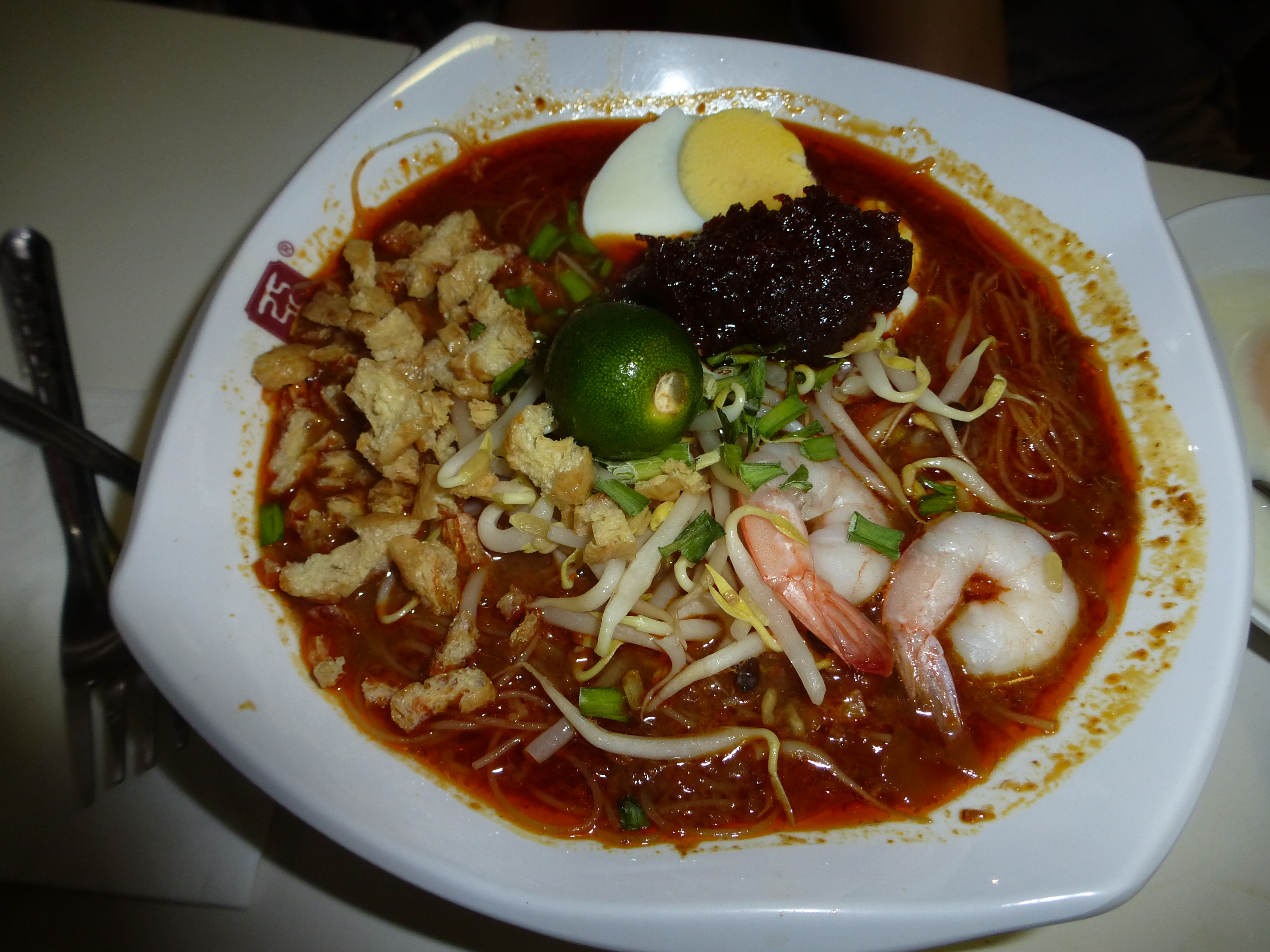 We went to the Maxwell Road Hawker Centre for lunch, with four aisles, each lined with dozens of stalls. At the entrance is a Buddhist shrine that, I’m told, is supposed to bring luck and prosperity to the hawkers. 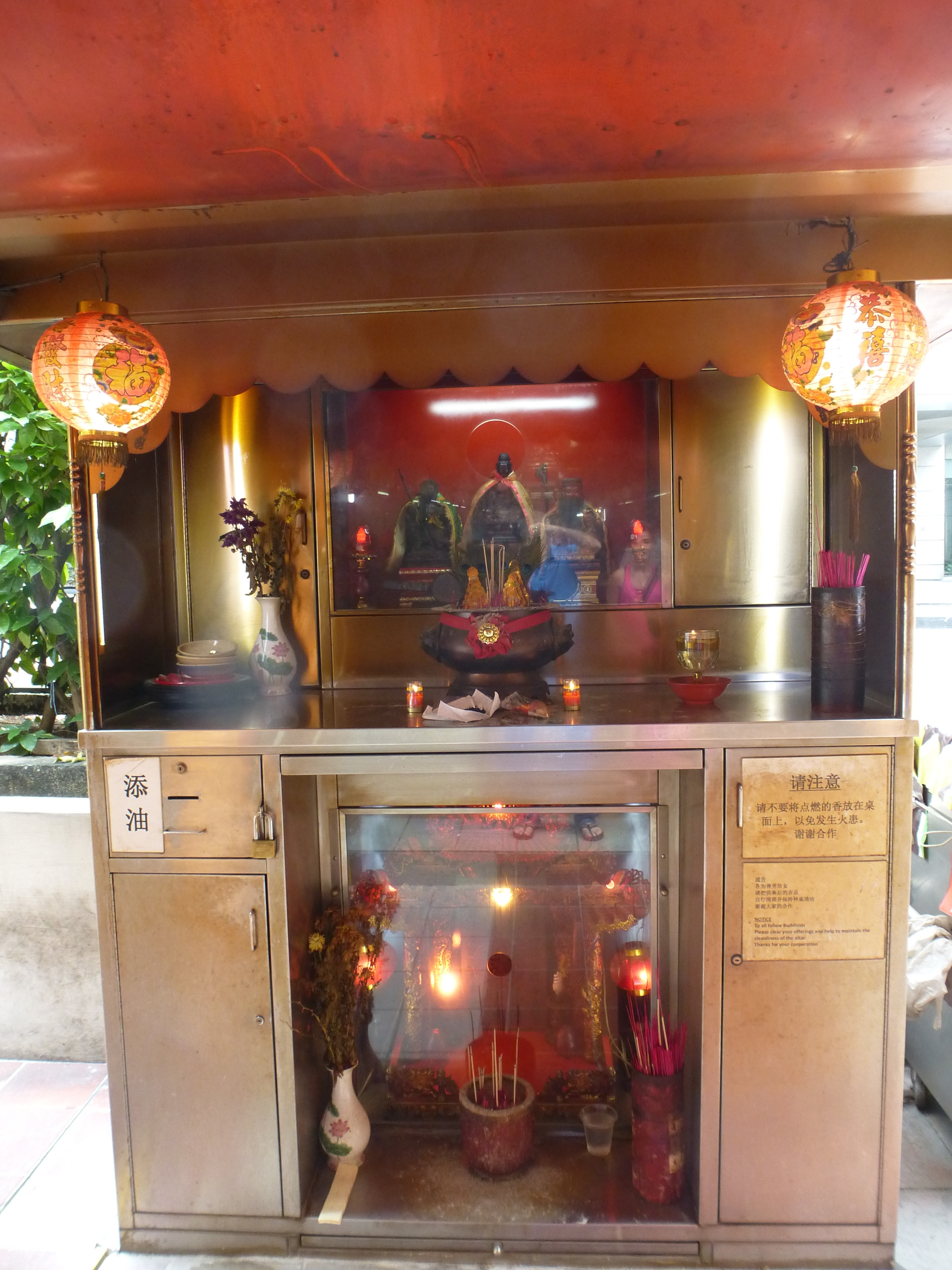 One of the aisles of the hawker centre (I suppose this would be called a “food court” in the U.S.): 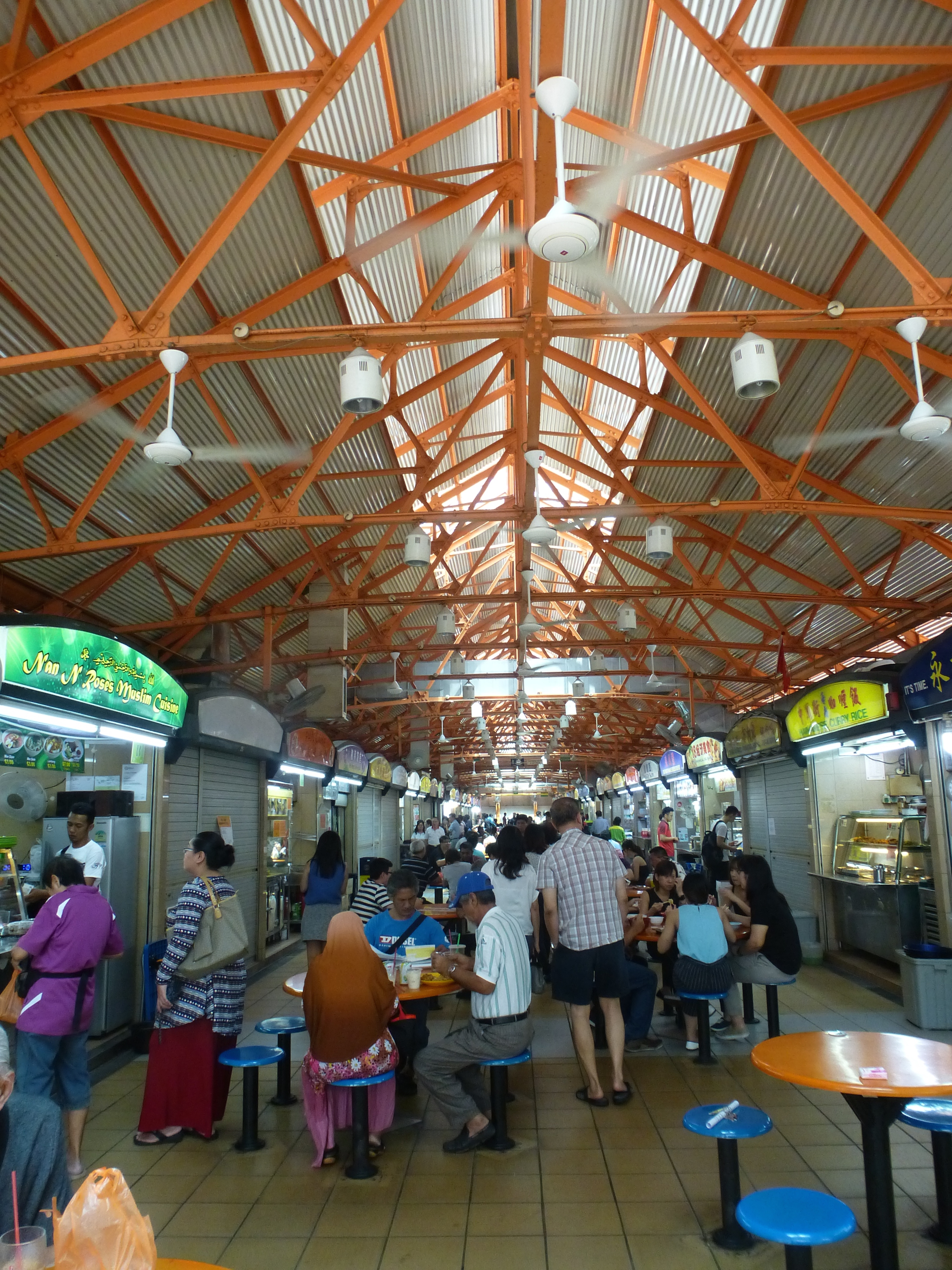 Some of the stalls showing how they specialize. Here’s a stall serving the famous chicken rice of Singapore. Each Singaporean has strong opinions about where to get the best version of this dish. 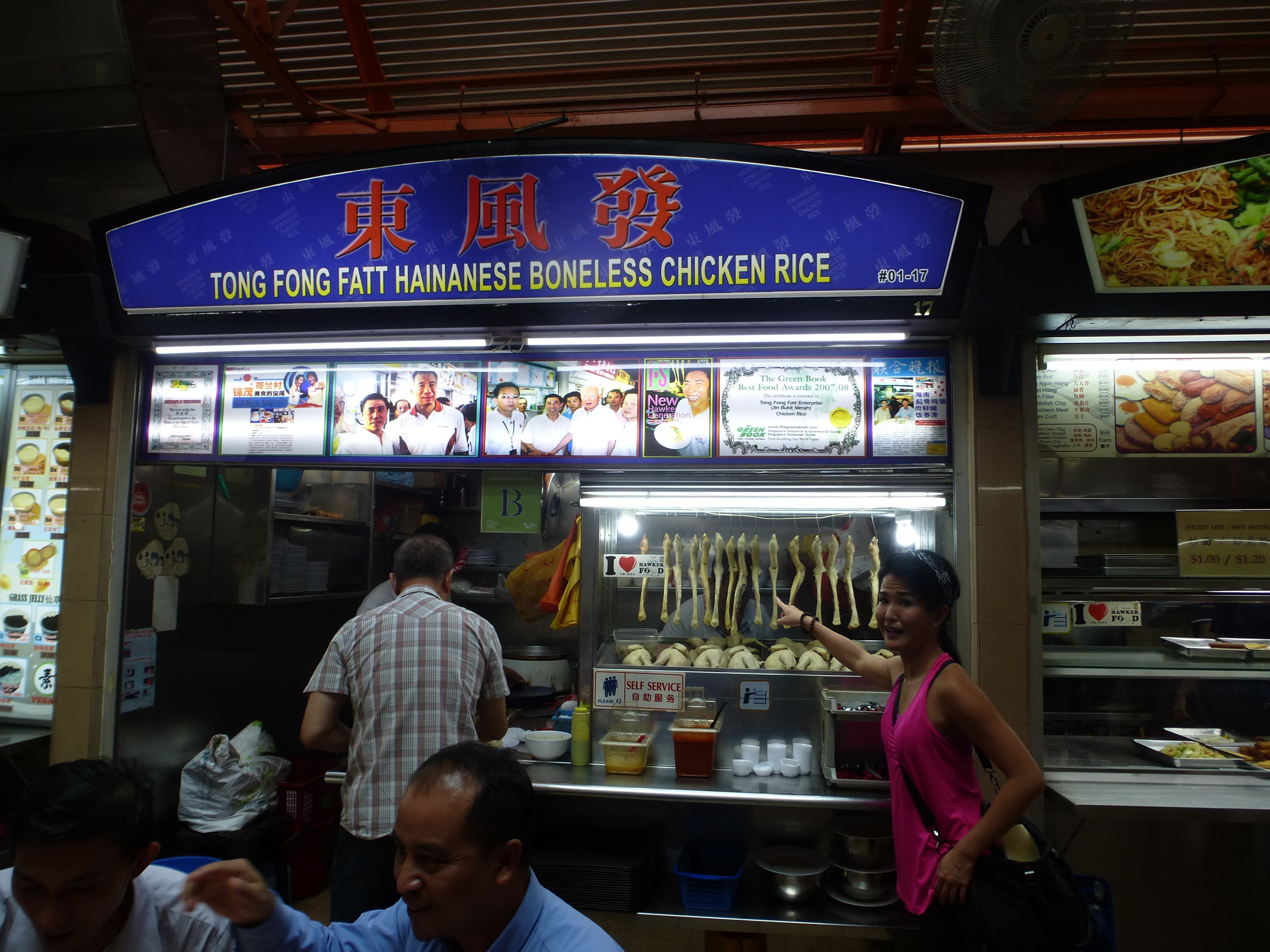 Chickens waiting to be braised, boiled, or roasted (chicken rice can be served all three ways): 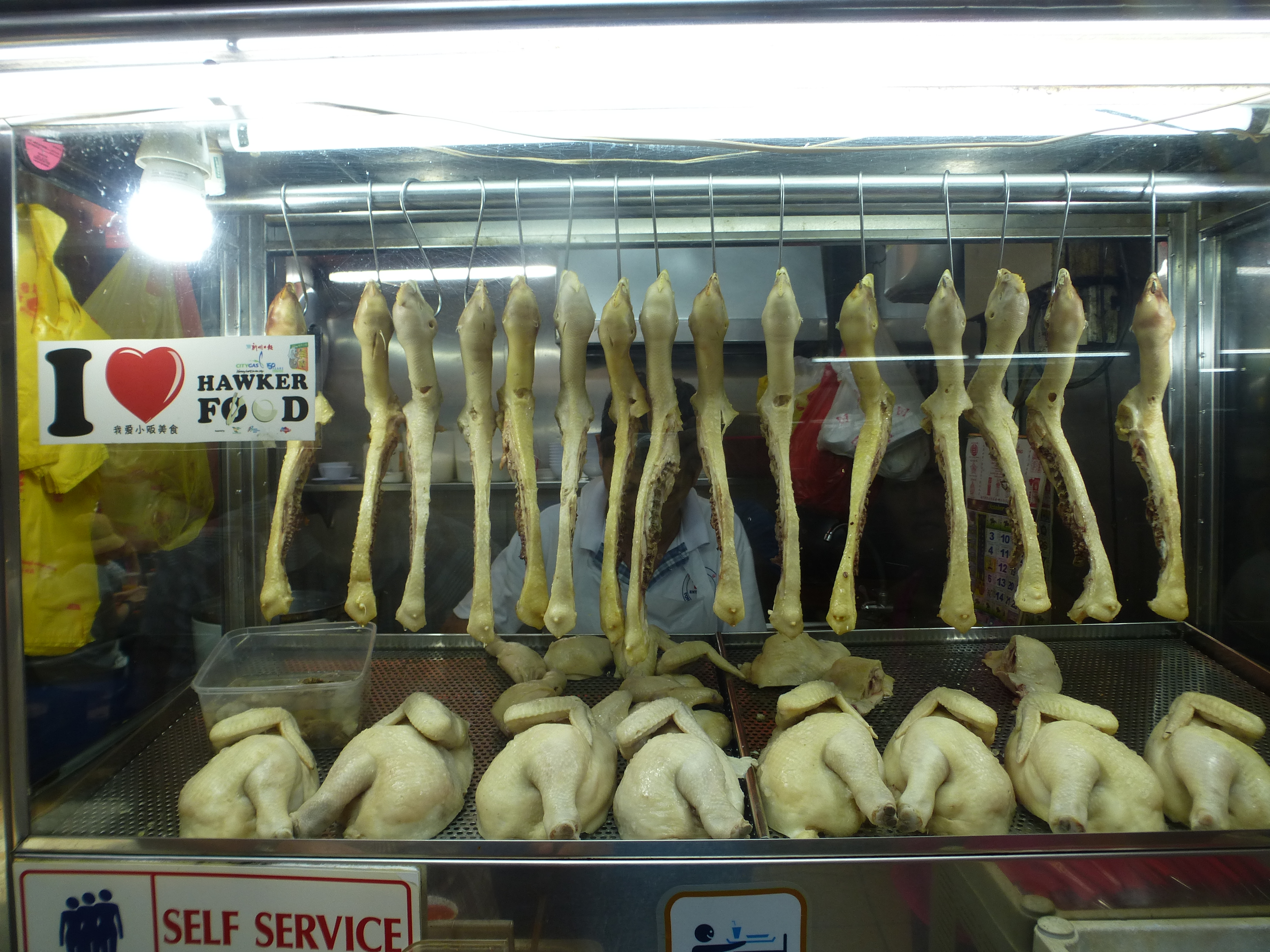 Fresh sugar cane juice on offer, along with various other juices and sweet bean curd desserts: 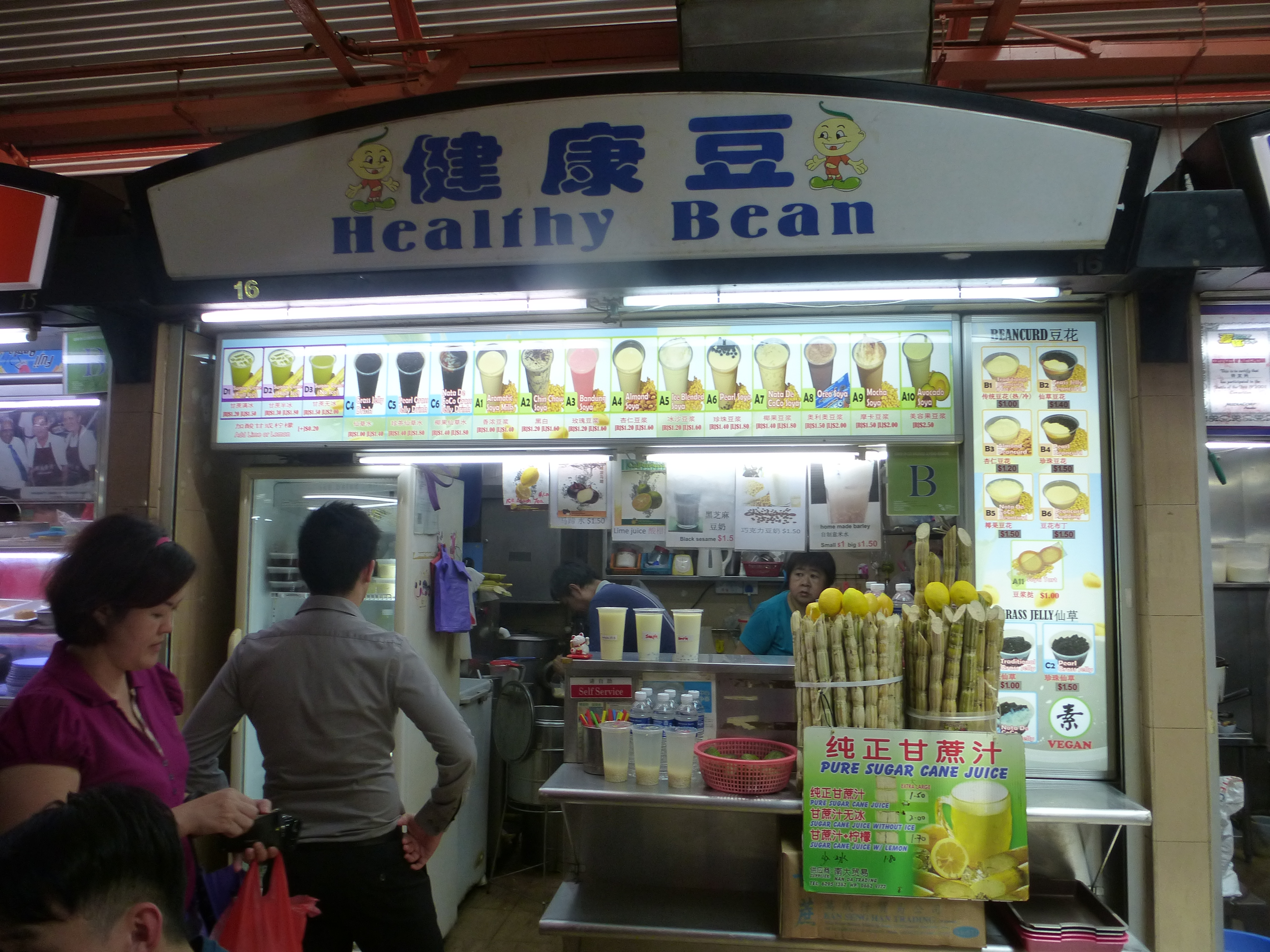 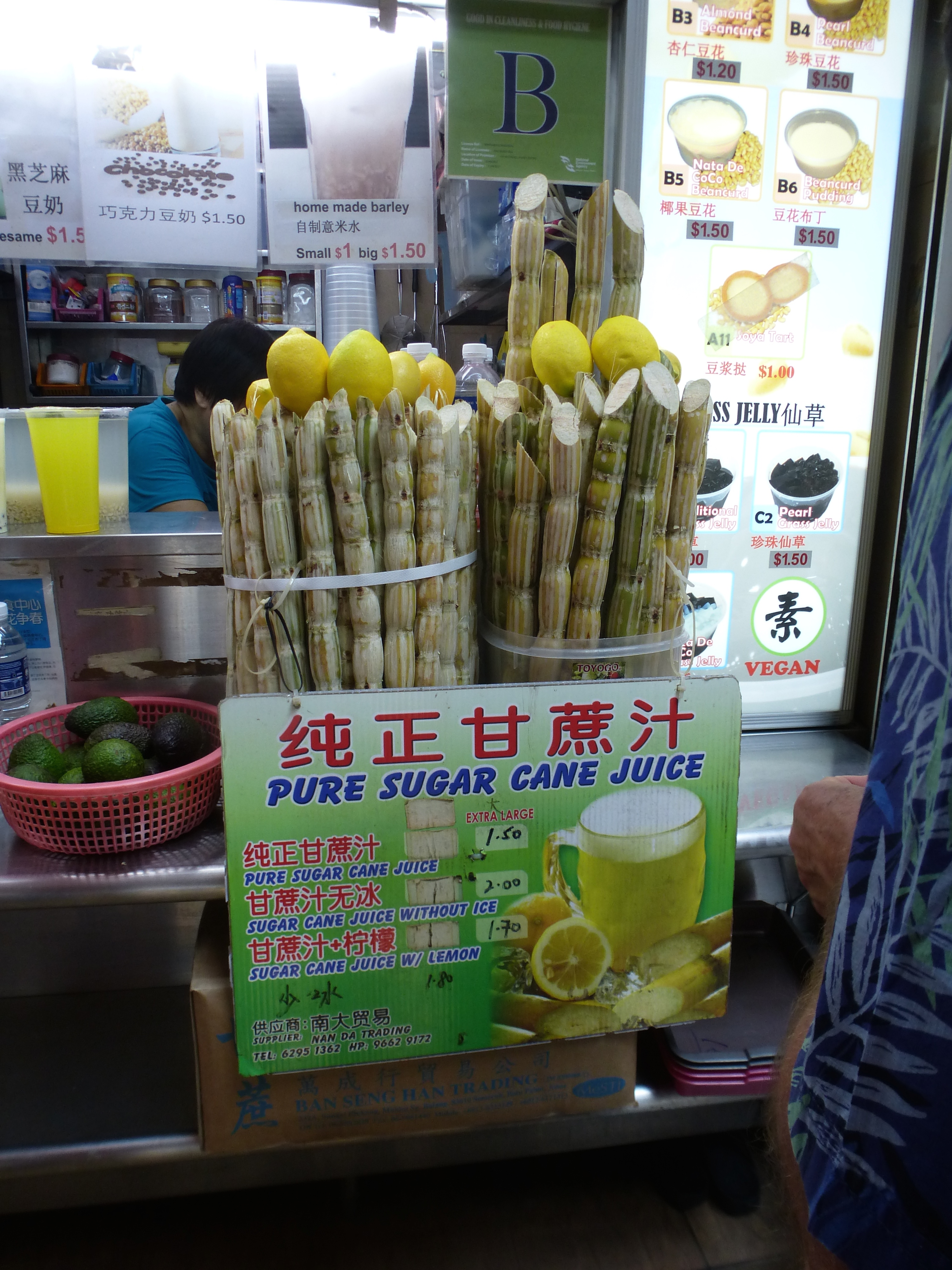 A stall specializing in the local coffee. Many people take it out in plastic bags into which they insert a straw: 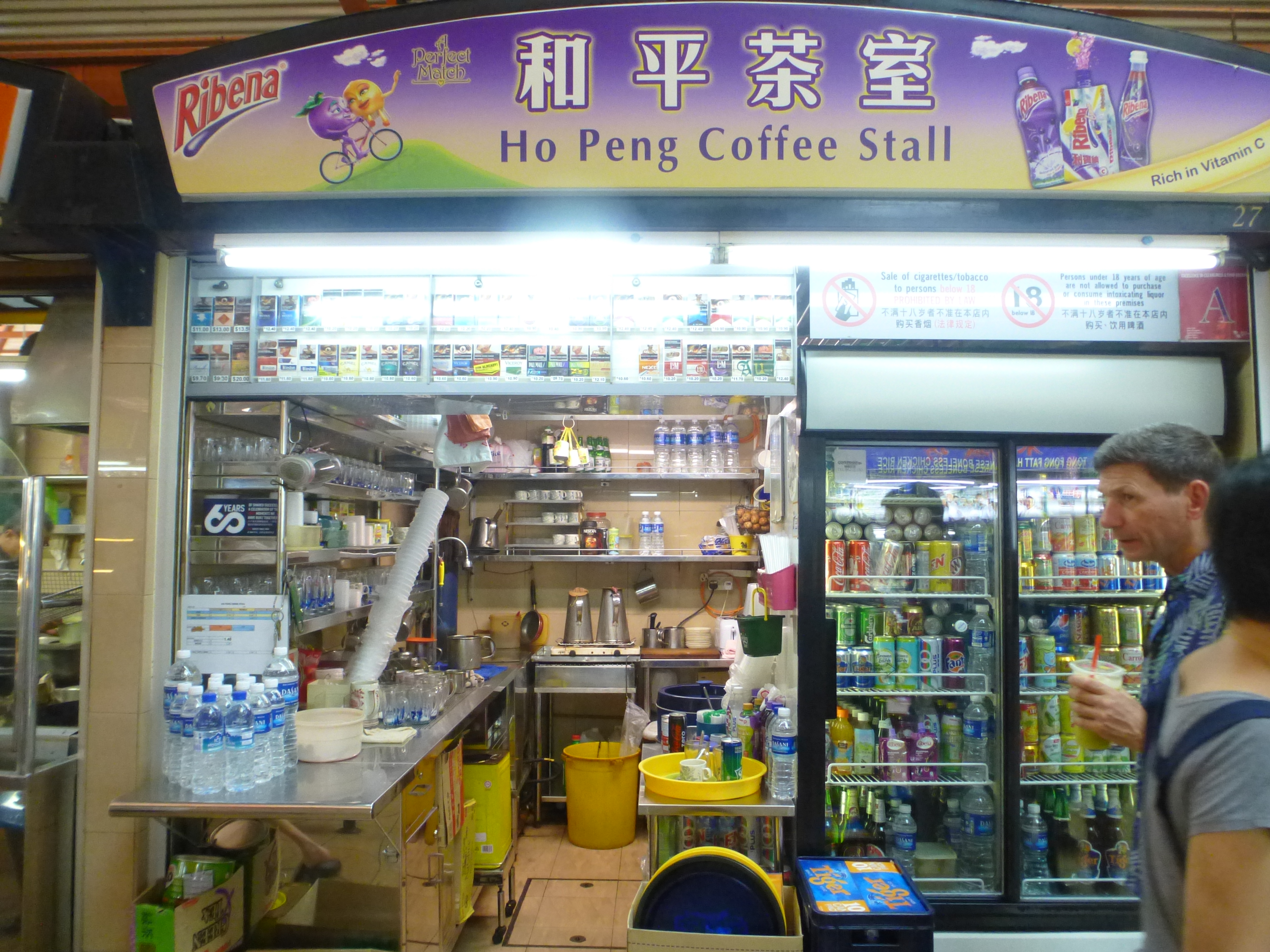 This one has four types of “pan cakes”, which are more like spongecake rolls than American pancakes: 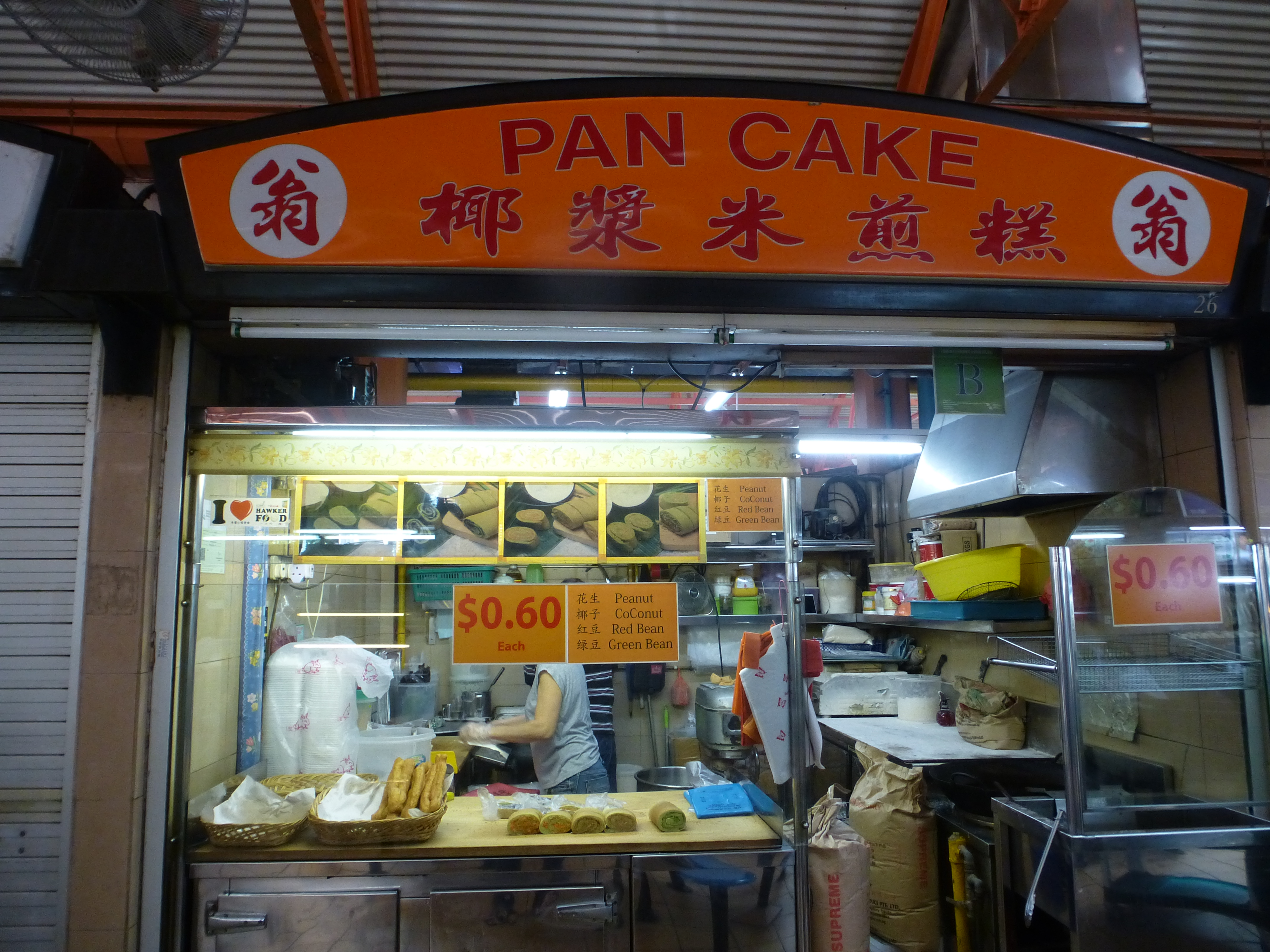 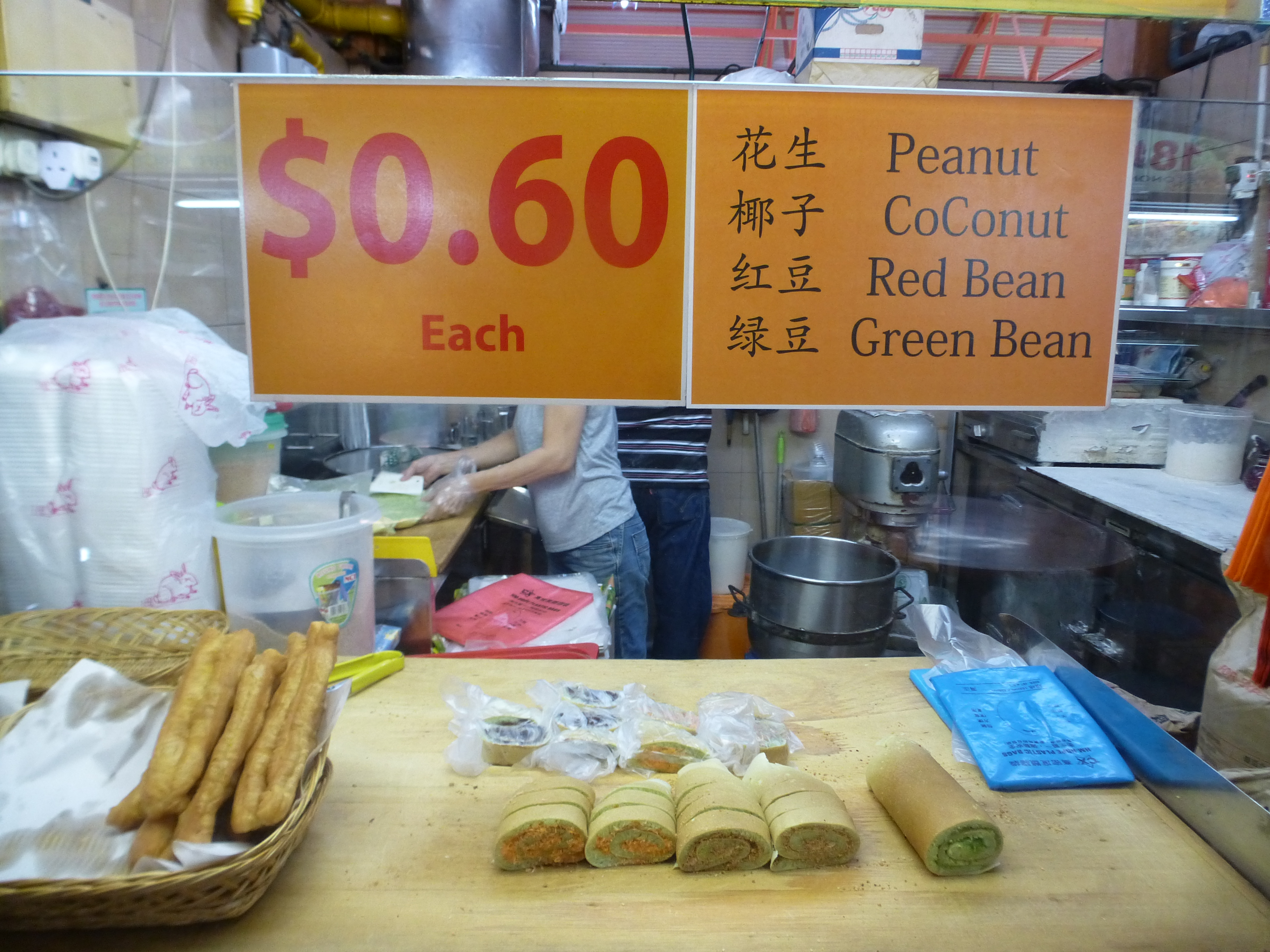 I would have to try all four. Here’s a peanut and what looks like a red bean pan cake. The green comes from pandan leaves. 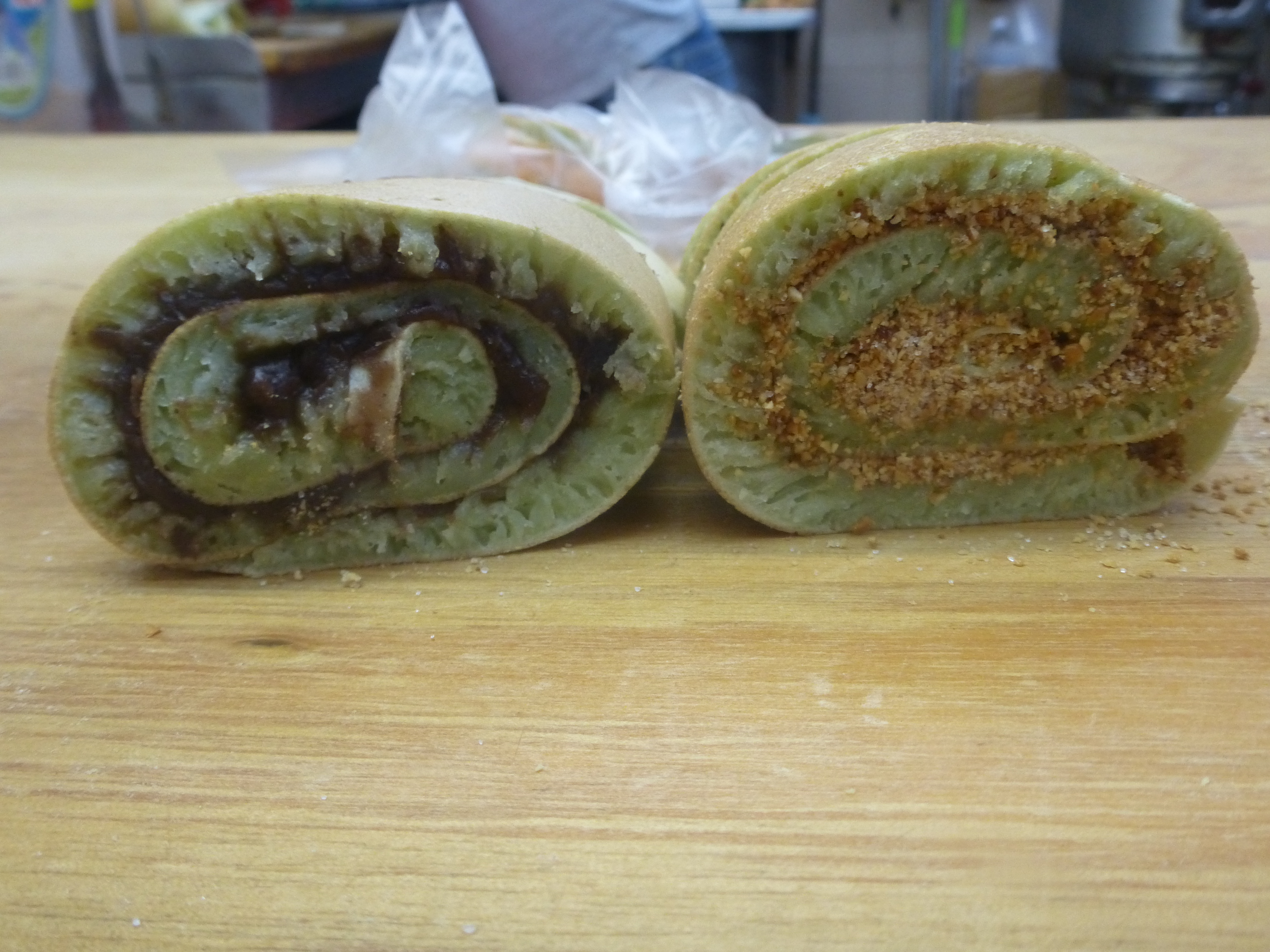 This stall, the one with the blue and red sign far away, is very popular–look at the line! It serves only fish soup. 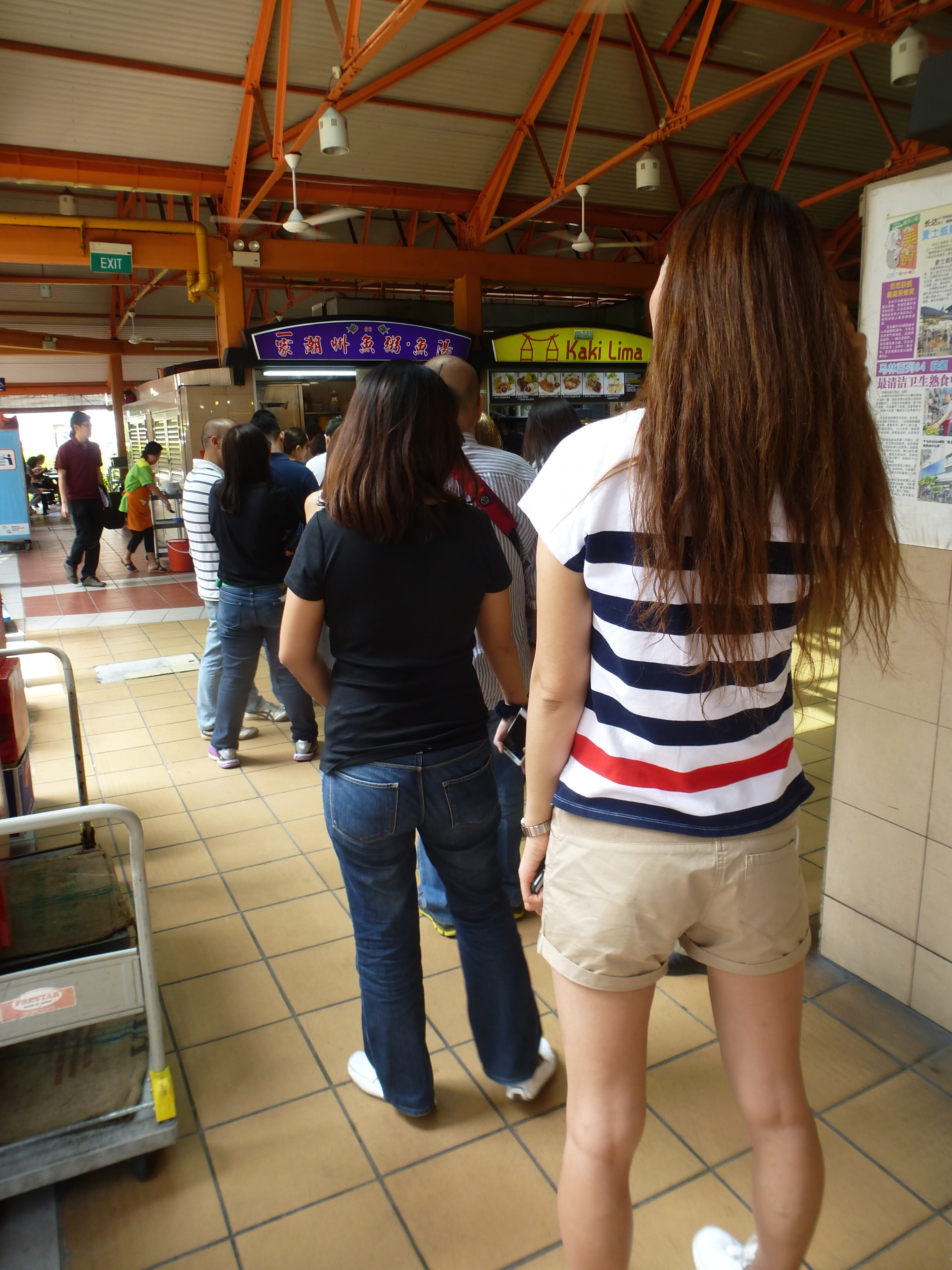 A popular chicken rice stall. You can see the line going off around the corner: 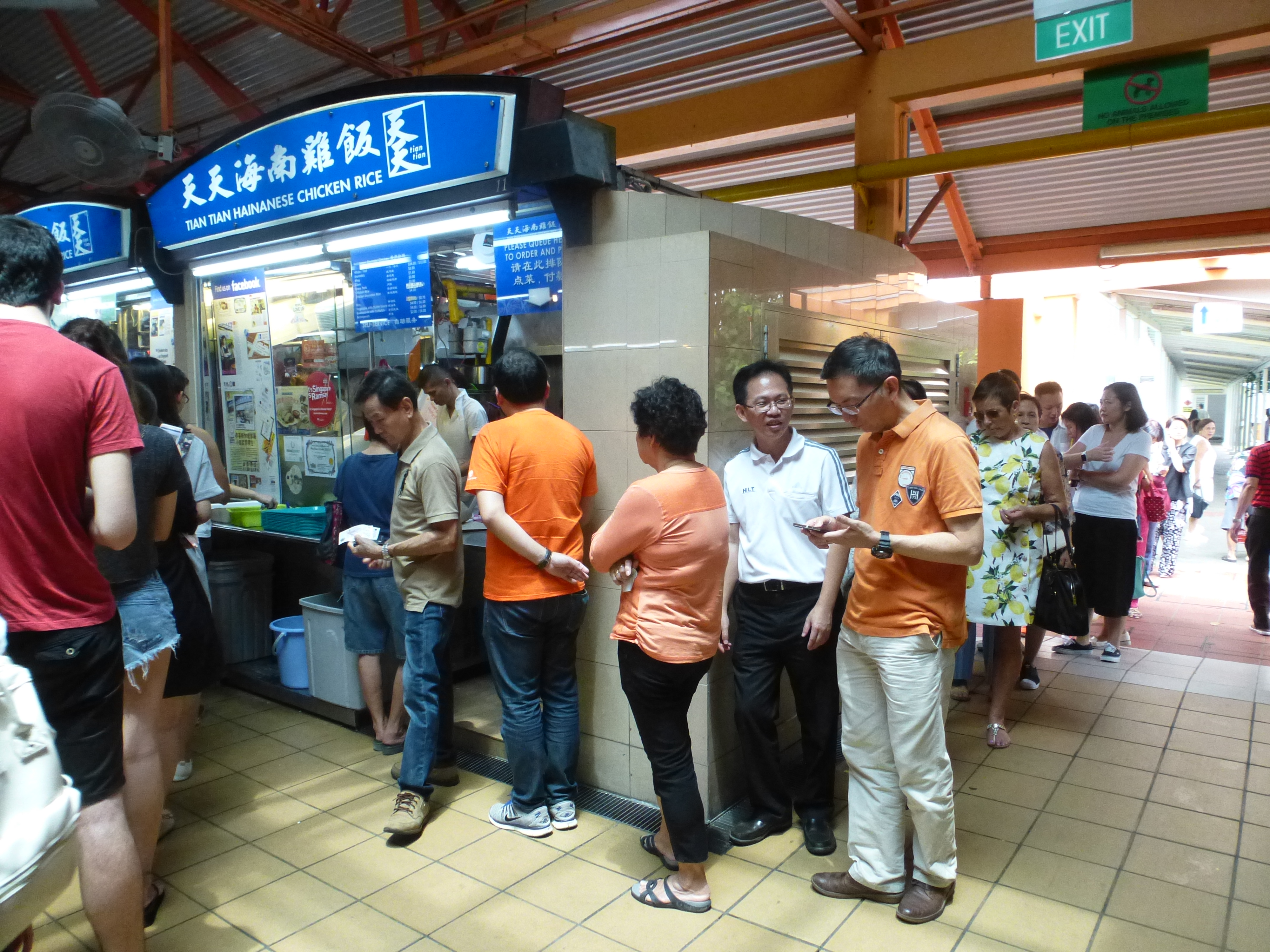 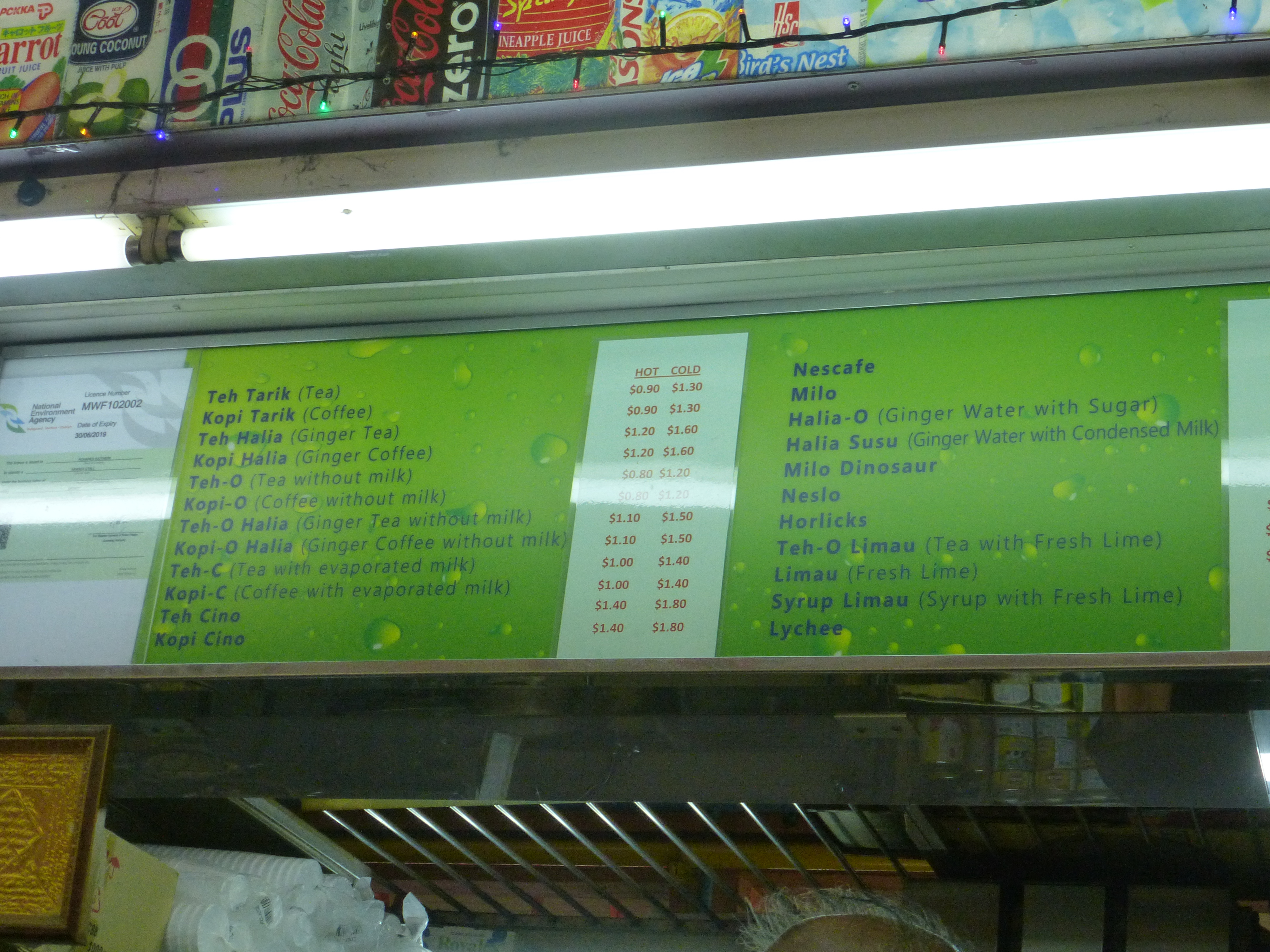 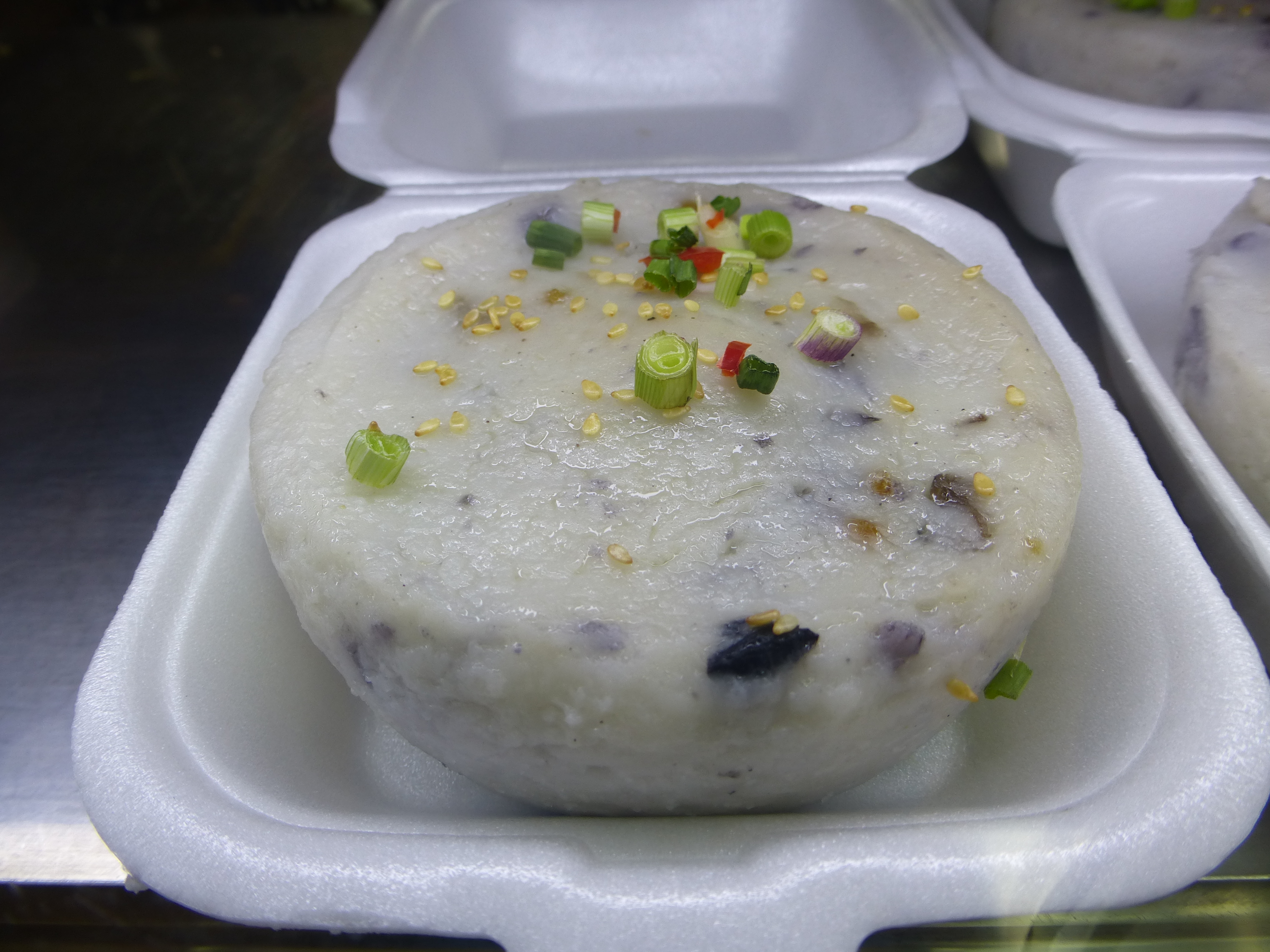 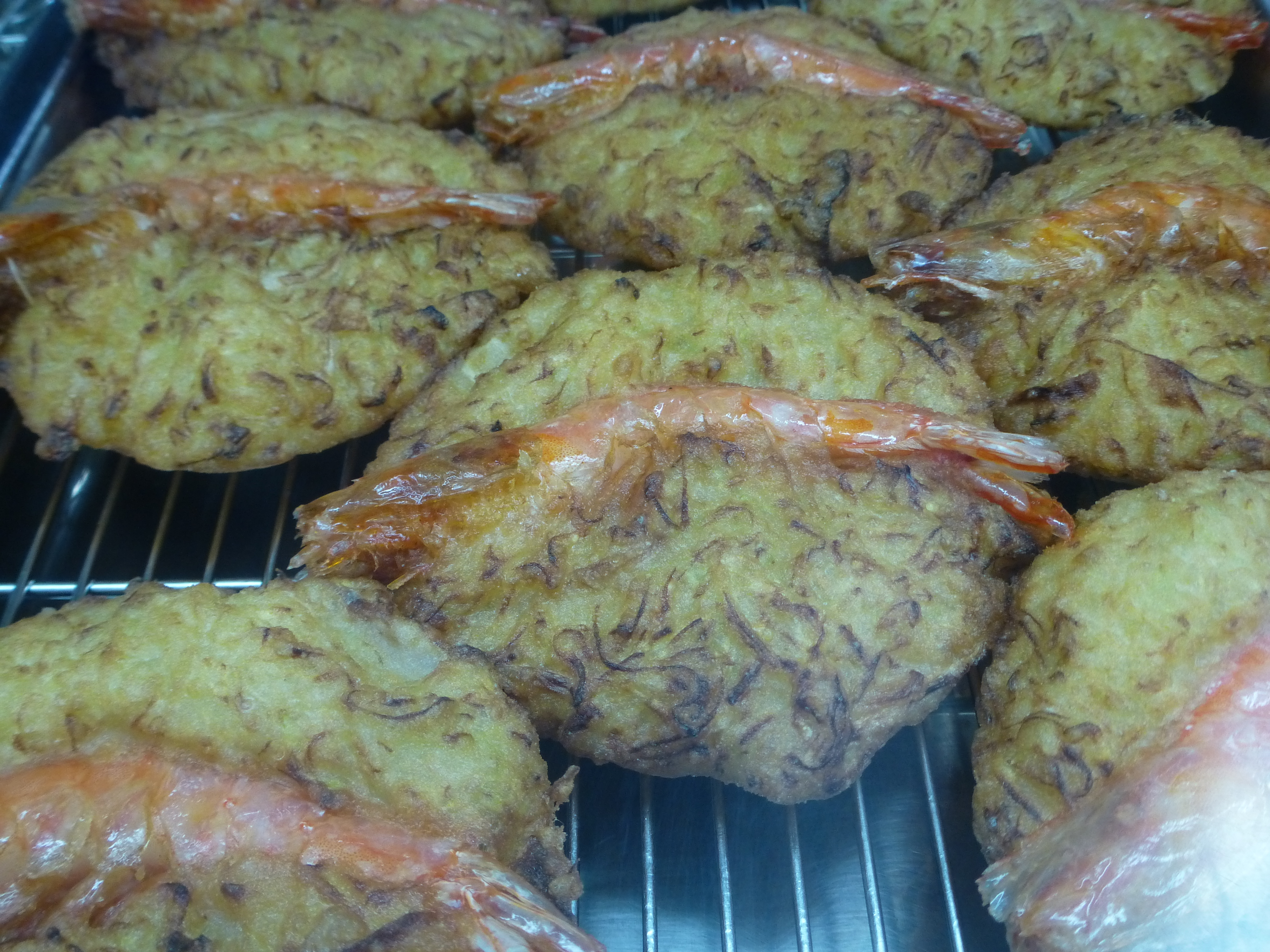 And our lunch. Here’s chicken rice (the rice is cooked in the chicken broth with other flavorings as well, so it’s delicious on its own). You add some chicken (on the bone) and flavor it with delicious chili sauce (each stall has its own secret recipe) along with soy sauce and another sweetish hoisin-like sauce. We also got a dish of chicken livers: 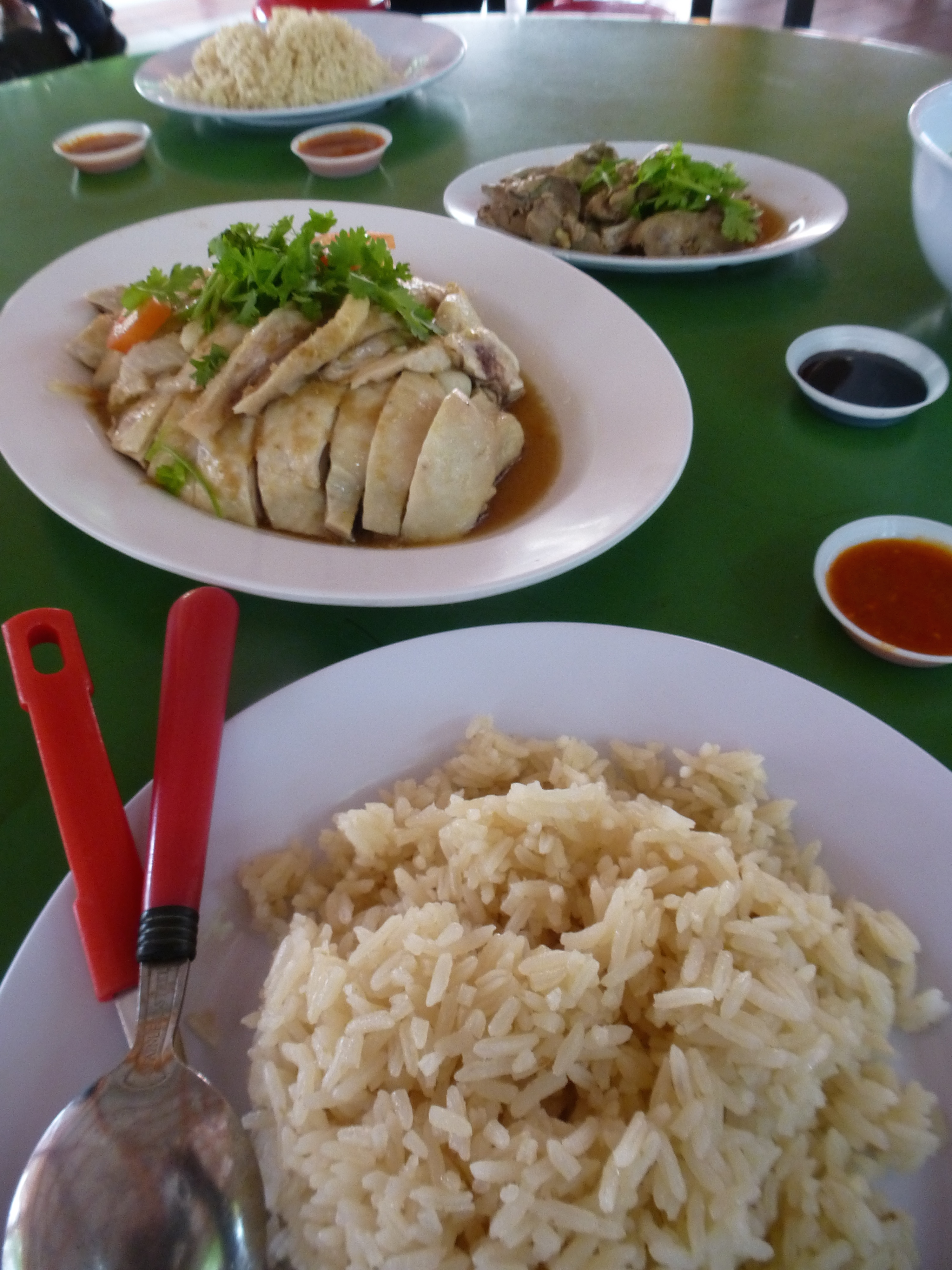 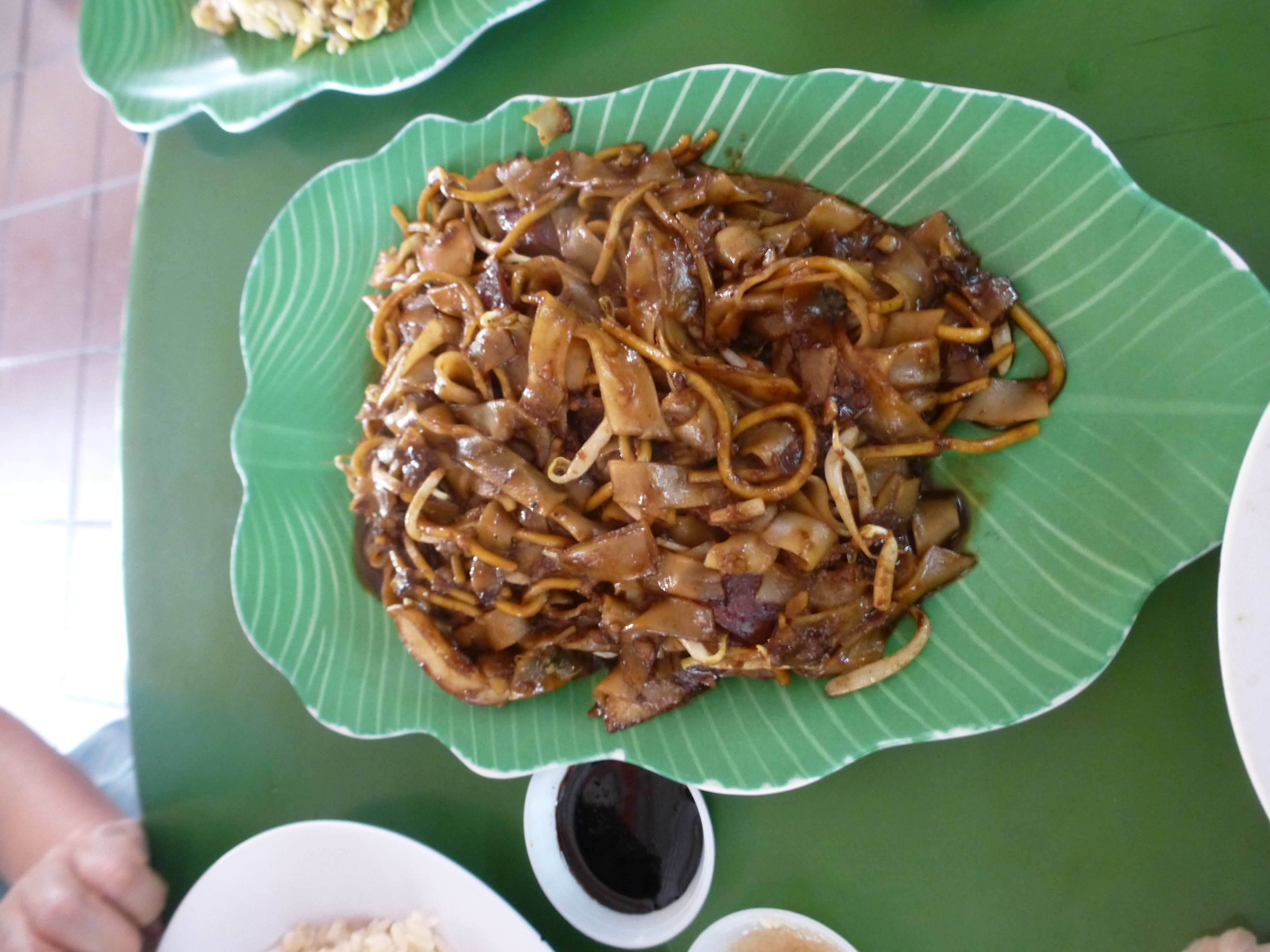 And a very famous Singaporean dish: oyster omelet. It consists of an omelet fried on a hot skillet with potato starch to give it a thicker consistency. When the omelet is nearly done, it’s topped with fresh oysters, with are only lightly cooked, and bean sprouts. The combination of thick egg and oyster is incredibly addictive. 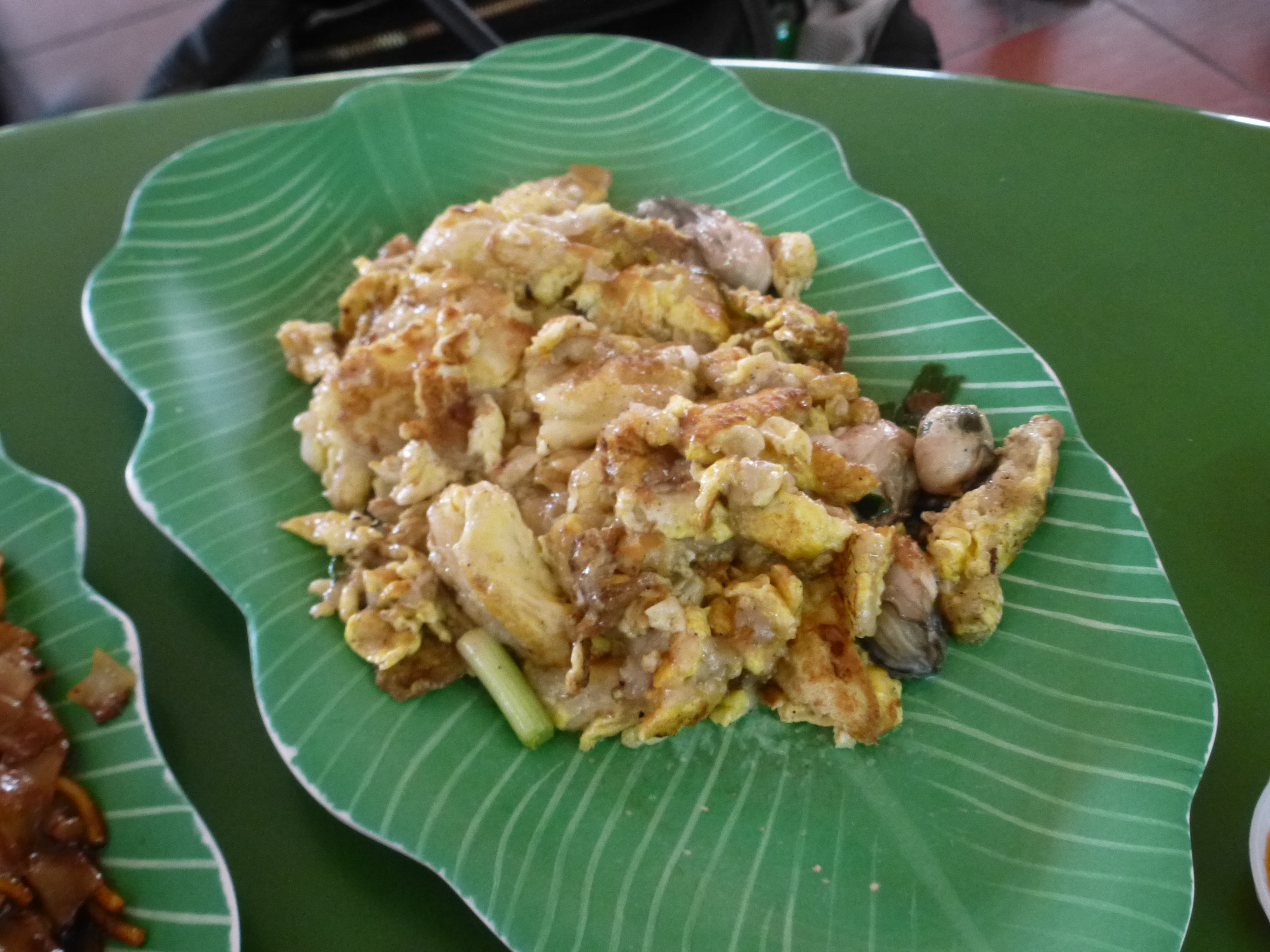 We washed down lunch with big glasses of sugar cane juice (left) and lime juice, made with very small limes that resemble Key limes but are less bitter: 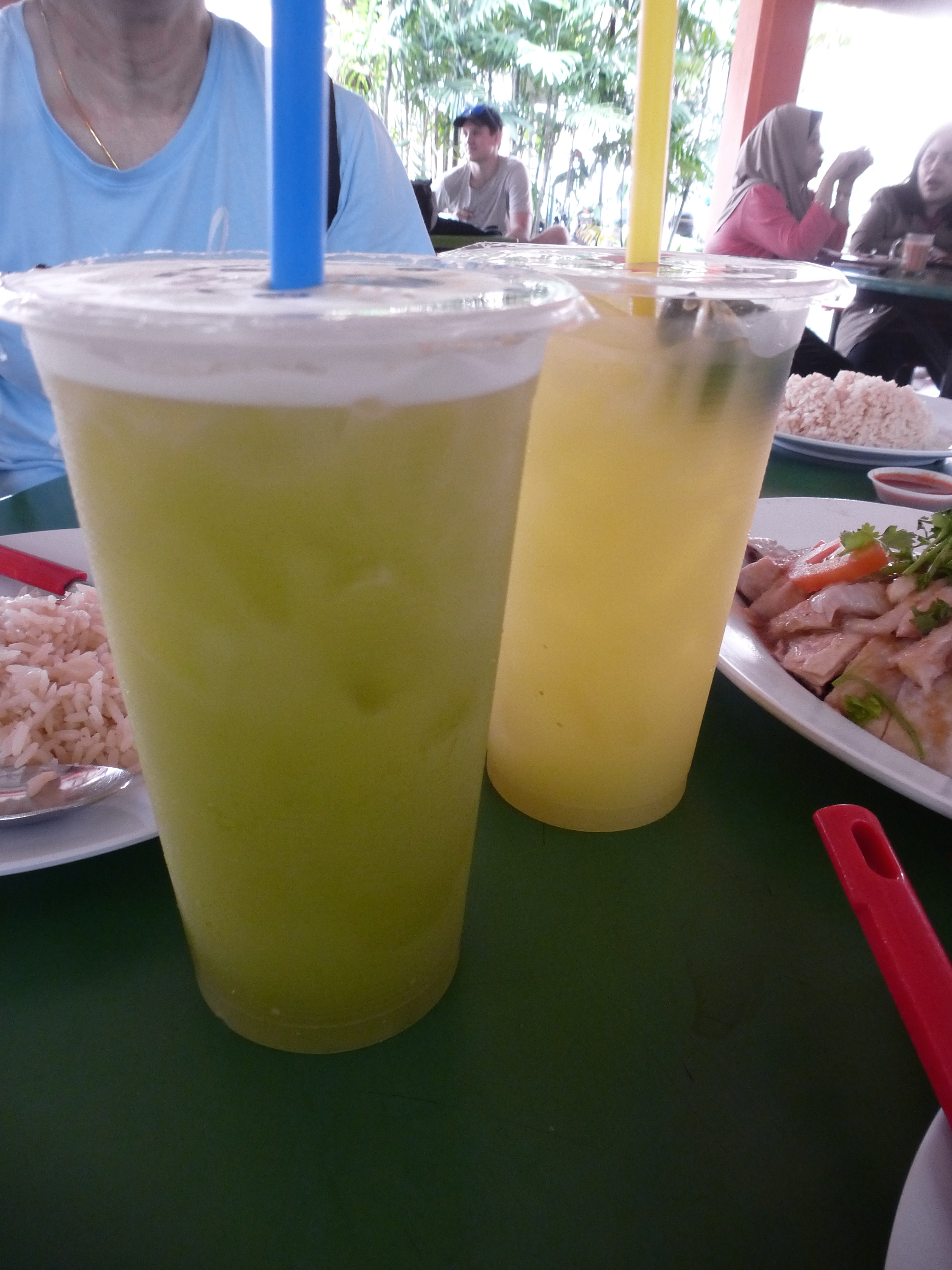 Melissa, Annie, and Michael, about to tuck into lunch.My “food folder”, containing the field guide to Singapore food compiled for me by Melissa, is by my plate. 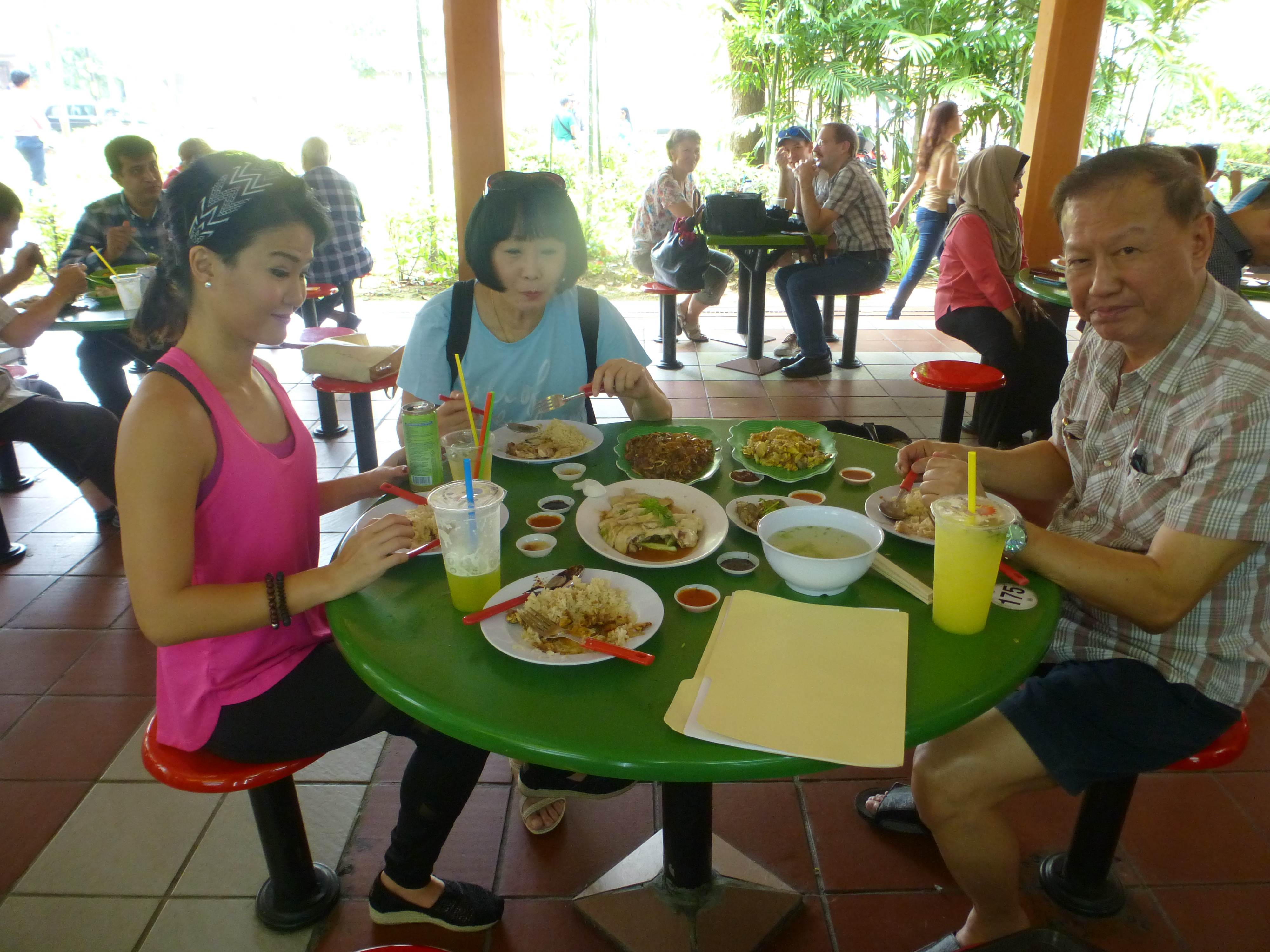 We had dessert at my request, because I do love the shaved-ice desserts in Singaporean, Indonesian, and Malaysian cuisine. Here is cendol, an Indonesian dessert made with rice flour, shaved ice, grass jelly, agar, red beans, and other goodies. It’s all mixed together and eaten like a soup as the ice melts. This light and cold dessert is the perfect ending to a heavy Singapore meal: 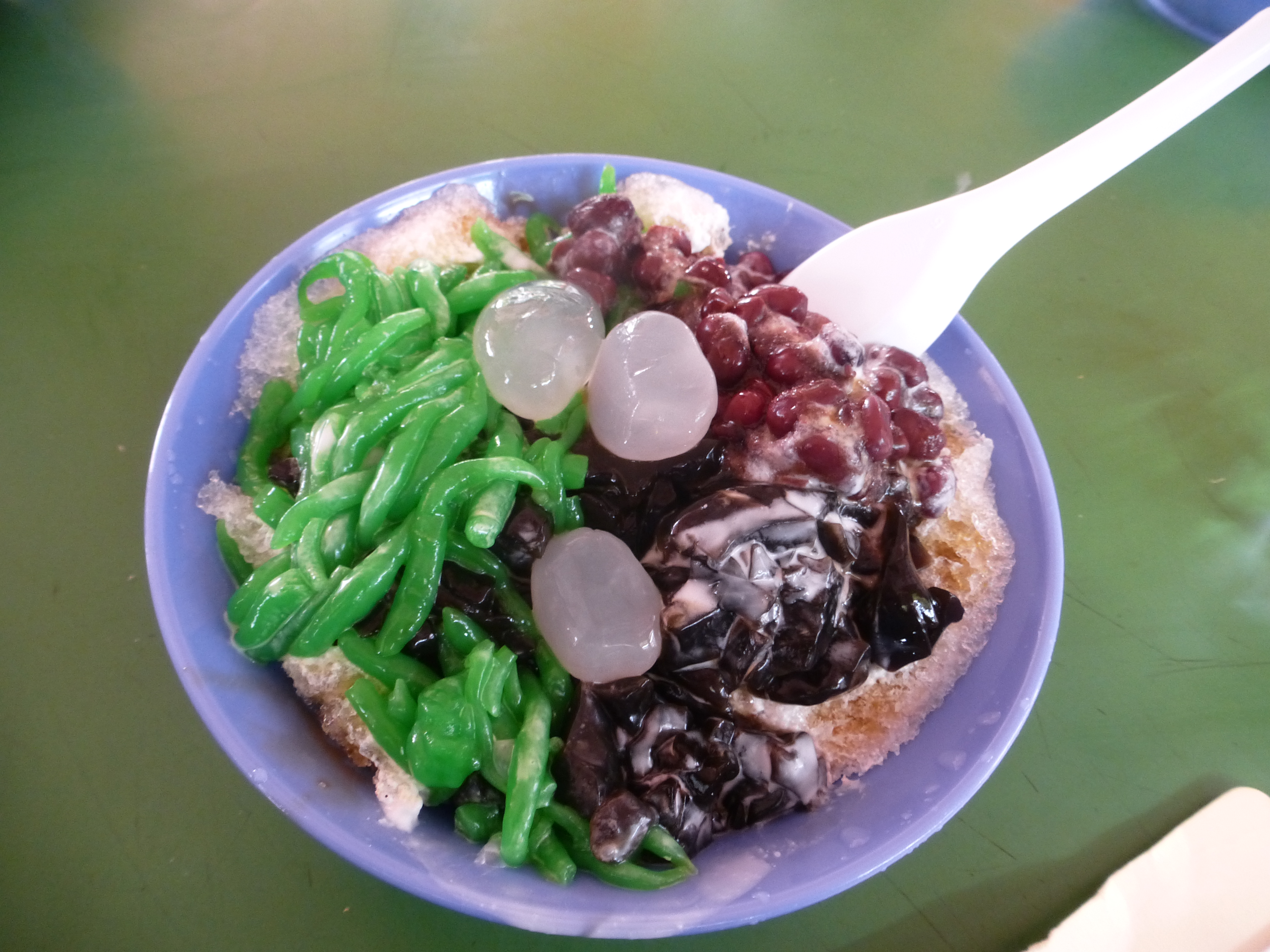 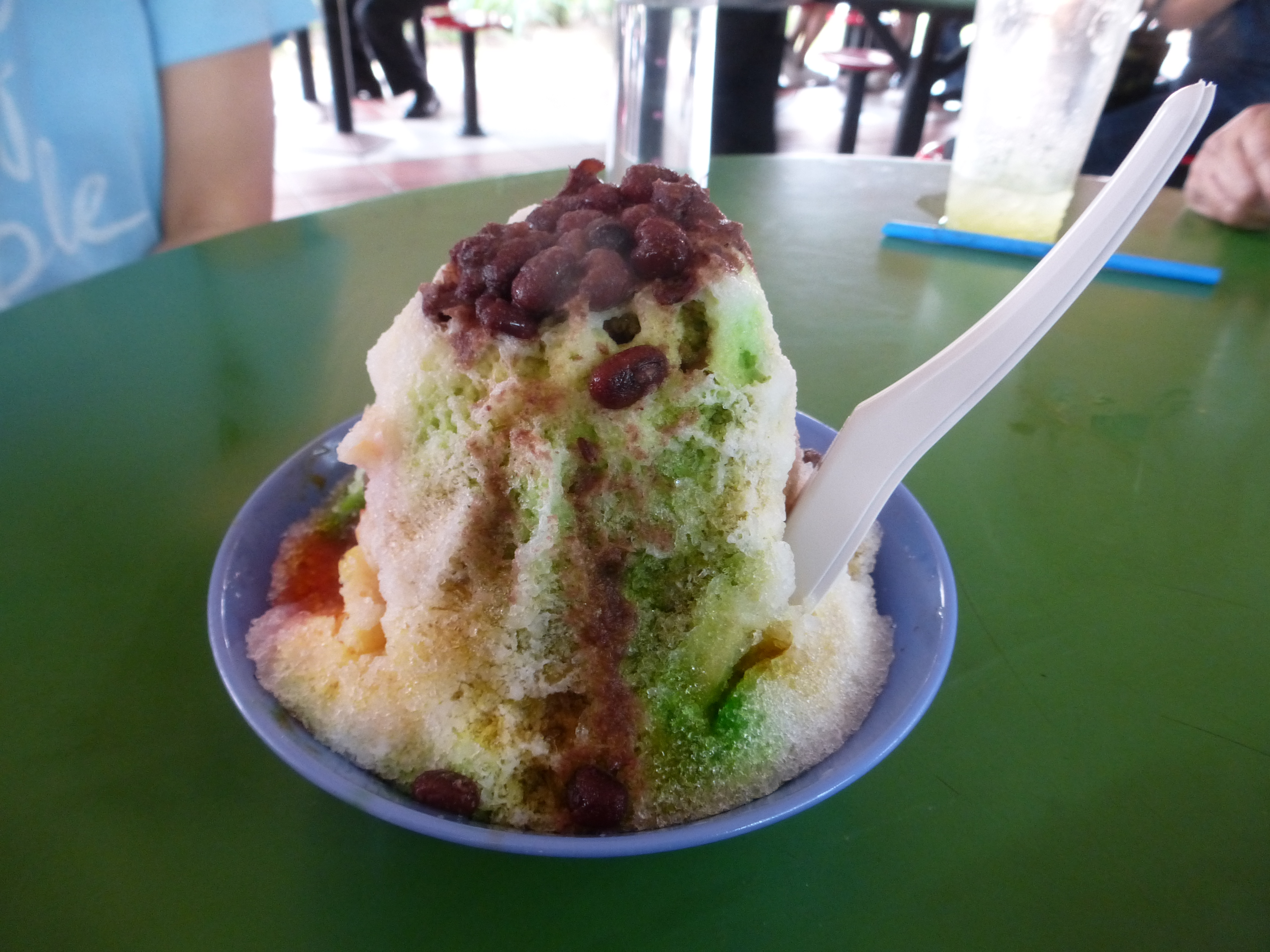 After a meal like that, you need digestive assistance, and good luck cats (found everywhere in Chinese- and Japanese-influenced cultures) are there to help. I can haz nap, plz? 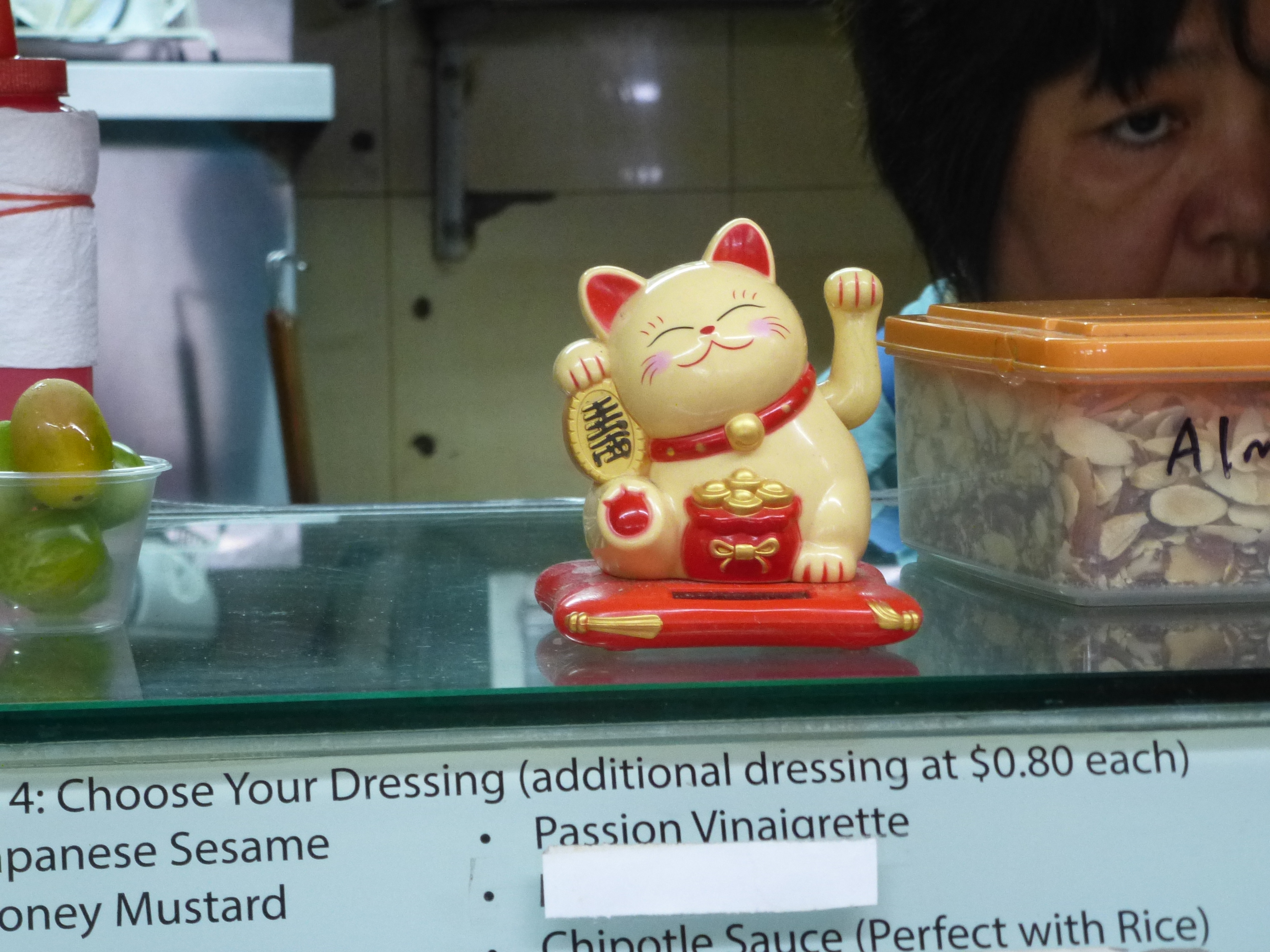