My tank of photos is lower than I’d like, so send in your good stuff, please. Today we’ll feature one regular and a couple of irregulars.

The regular, Stephen Barnard, of course, who sends photos from his Idaho ranch.  I think the first photo should be on the U.S. flag or something. . .

Desi and Lucy [Haliaeetus leucocephalus] with the moon in the background. One of the eaglets left the nest today, but didn’t go far — just to a nearby perch. 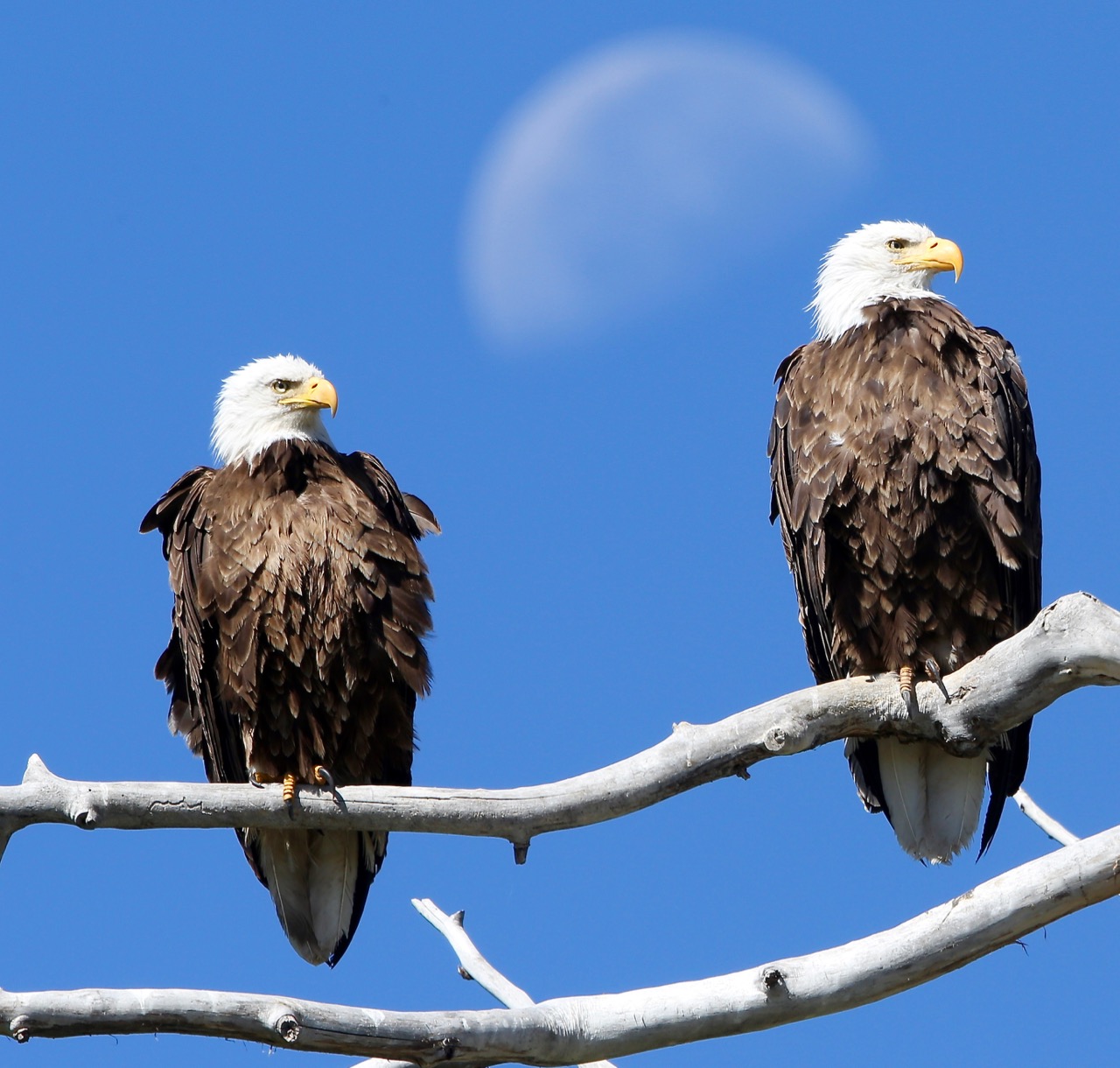 I’ve been sending photos of some Red-tailed Hawk [Buteo jamaicensis] chicks. They’ve fledged. This is a fledgling perched close to the ground. They aren’t very spooky right out of the nest. They seem to have to learn that. 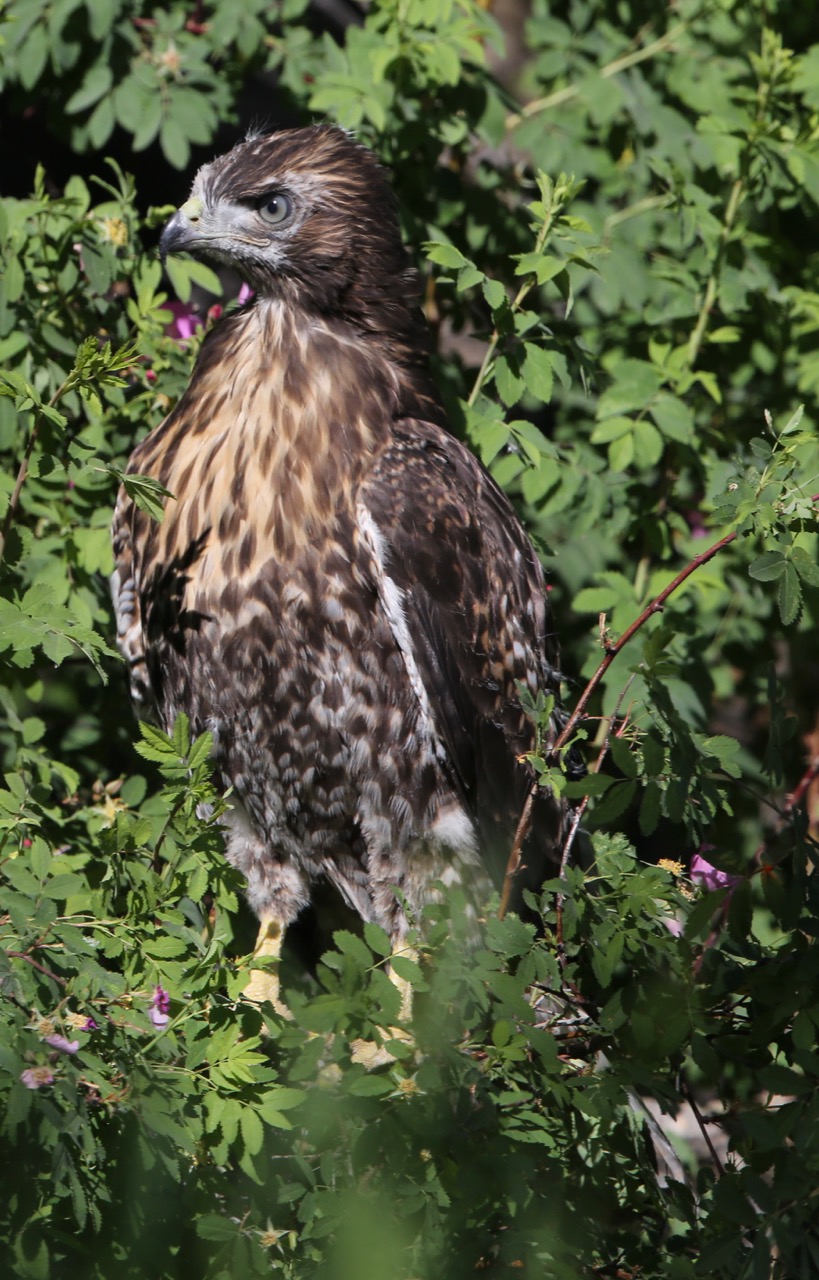 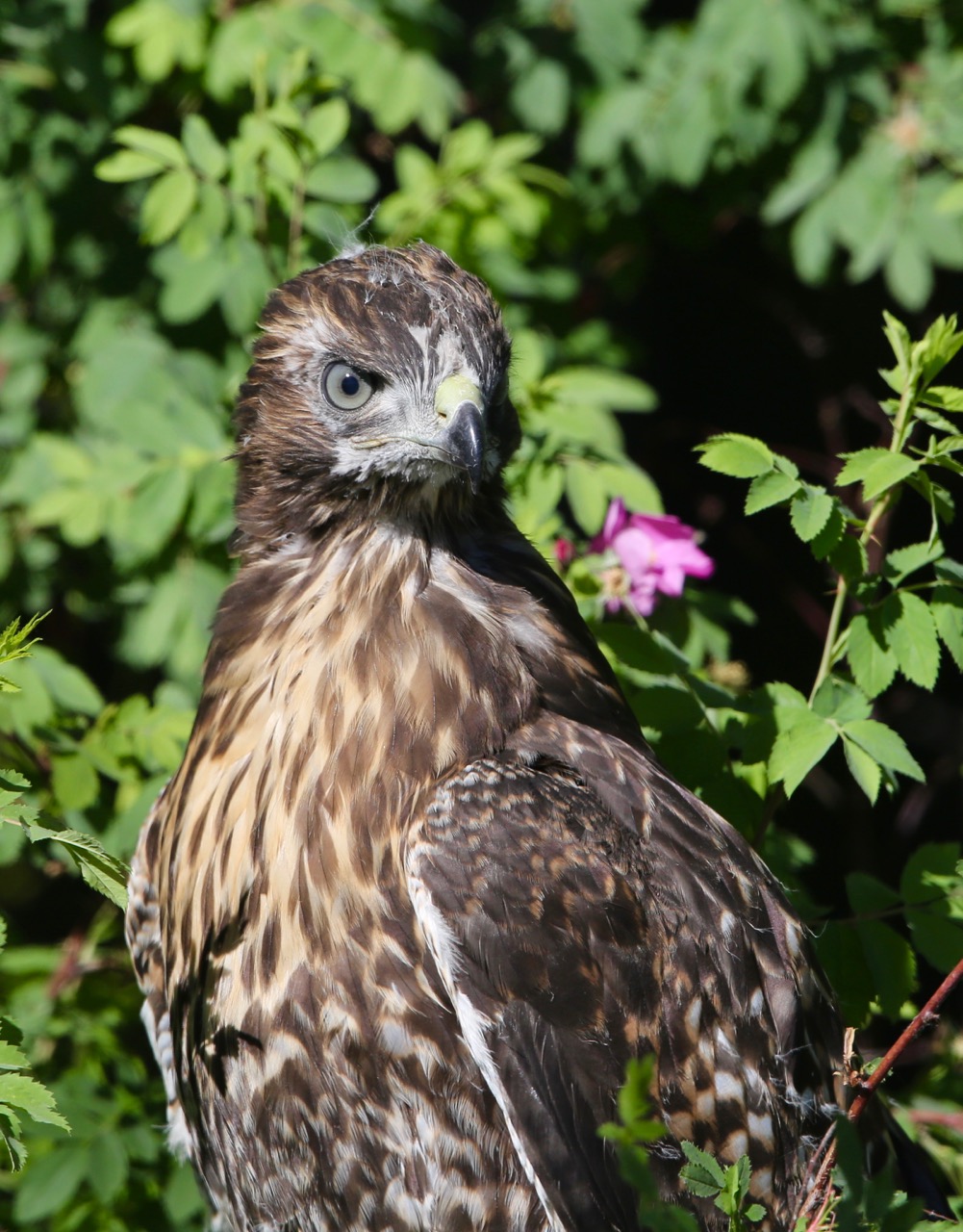 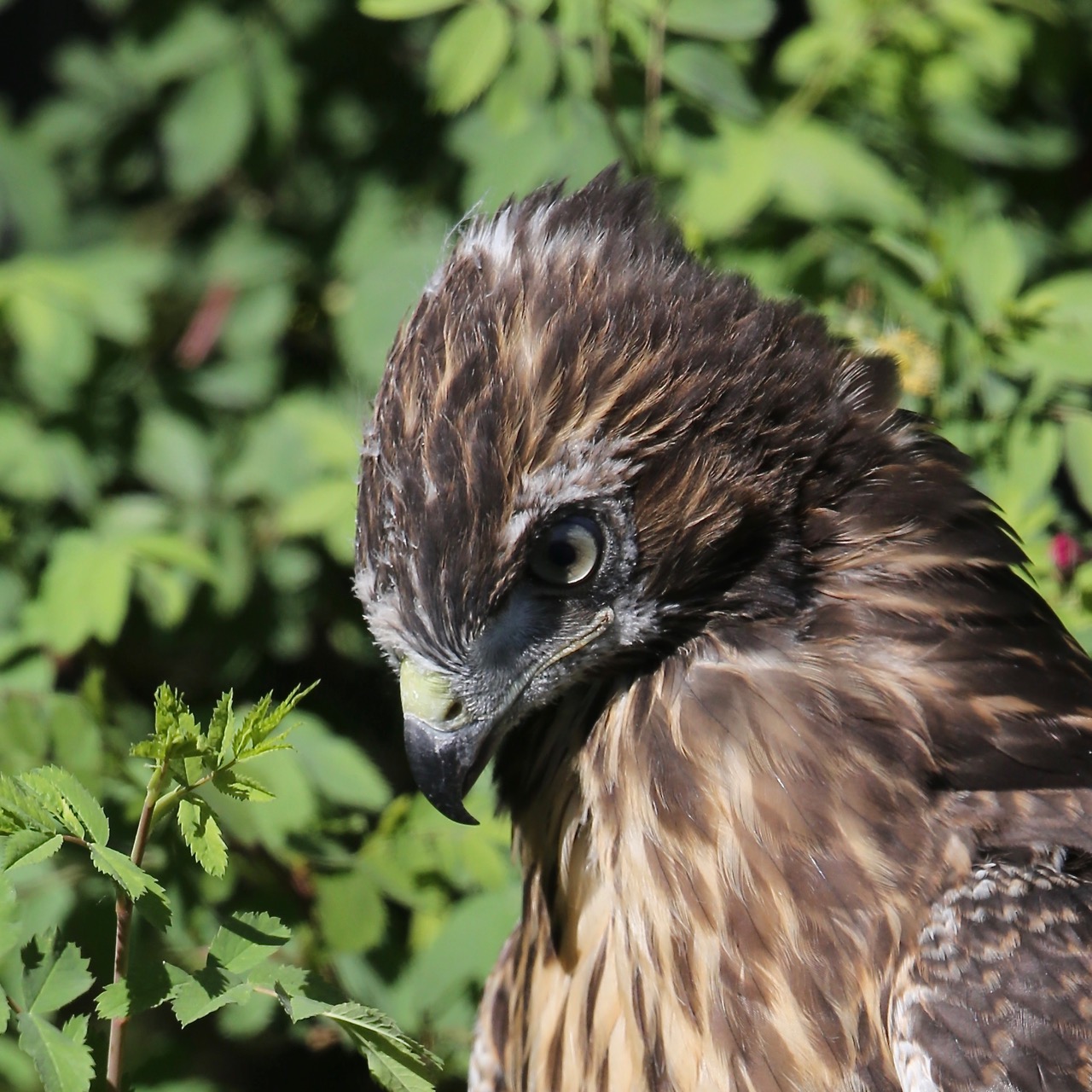 From an old friend, Peter Haas, a fellow grad student at Harvard:

I thought you might enjoy this shot of a crab spider on a peony blossom. Pretty good job of matching color patterns. [JAC: This is almost certainly Misumena vatia, which can change color from white to yellow and vice versa. As Wikipedia notes:

These spiders change color by secreting a liquid yellow pigment into the outer cell layer of the body. On a white base, this pigment is transported into lower layers, so that inner glands, filled with white guanine, become visible. The color similarity between the spider and the flower is well matched with a white flower, in particular the Chaerophyllum temulum, compared to a yellow flower based on the spectral reflectance functions. If the spider dwells longer on a white plant, the yellow pigment is often excreted. It will then take the spider much longer to change to yellow, because it will have to produce the yellow pigment first. The color change is induced by visual feedback; spiders with painted eyes were found to have lost this ability.

The color change from white to yellow takes between 10 and 25 days, the reverse about six days. The yellow pigments have been identified as kynurenine and 3-hydroxykynurenine.] 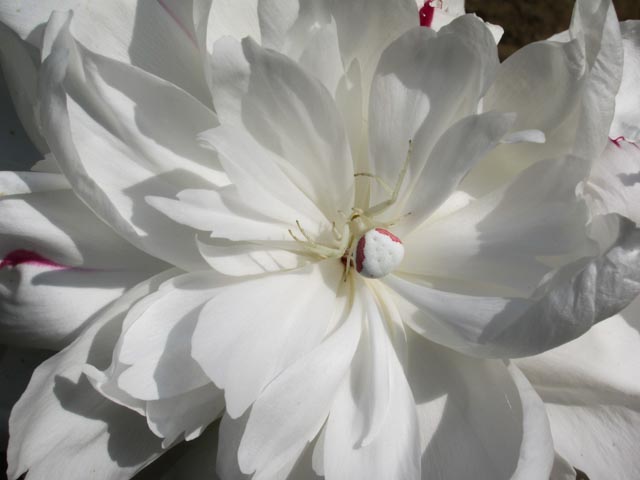 Old pic from 2011 — Valley behind the doe is town of Ouray CO. Lucky shot for me — I’m amateur of amateurs of wildlife shots. I like the detail of her fur. I’m not sure what that gray fur is — some skin disease or just dirt.

Deer Whisperer Robin Cornwell, also in Colorado, didn’t think it was disease, though:

Mule deer are often brown and grey – with a darker grey on their head – always a distinguished marking – like a finger print. I would also notice adolescent deer resembling certain bucks – so the pattern may be passed down. I found the markings interesting – and it allowed me to give names to all the does – the males usually had distinguished antlers – and that was easier to use for naming (broken antler, King of the forest, odd-ball…)

Depending on the time of year, the doe could have been shedding her winter coat – and there is the possibility of mange – but that is not what comes to mind. 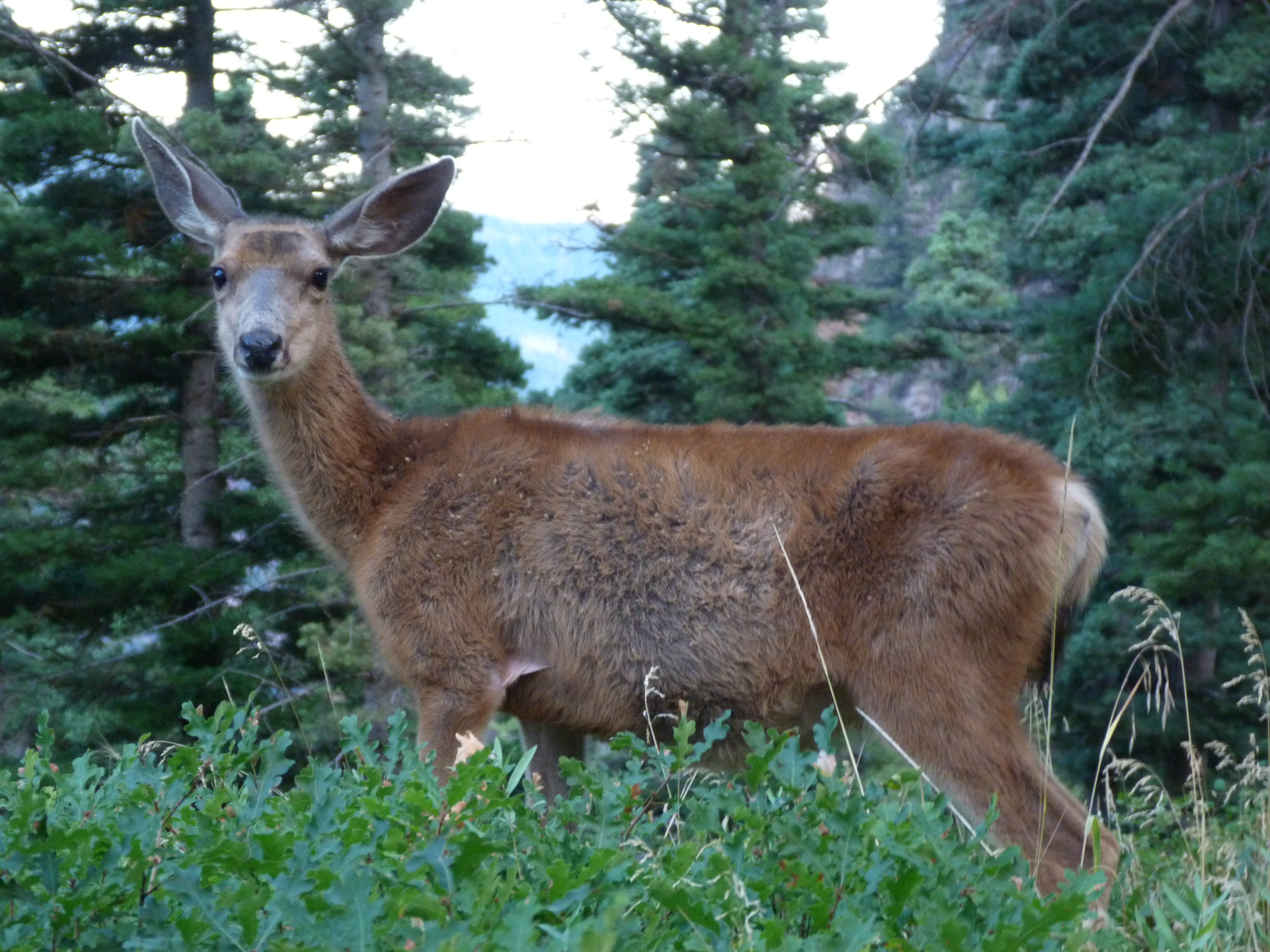 And from reader Ken Elliott in Oklahoma, an adorable baby bunny. Its size can be judged from comparing it to the kernels of corn! His comment:

Our neighborhood has seen a proliferation of what I believe are Sylvilagus floridanus, the Eastern Cottontail rabbit. Saturday evening my wife spotted a tiny version of the cottontail against our fence near the snacking station she has set up for the local wildlife. I was able to get a couple of pics of tiny baby Hazel, one of which I’ve attached in case it’s something you might want to post. She was not fearful whatsoever of the giant Ape who approached her. I never touched her assuming her mother would rescue her eventually, which I believe is what happened as soon as I went back inside. 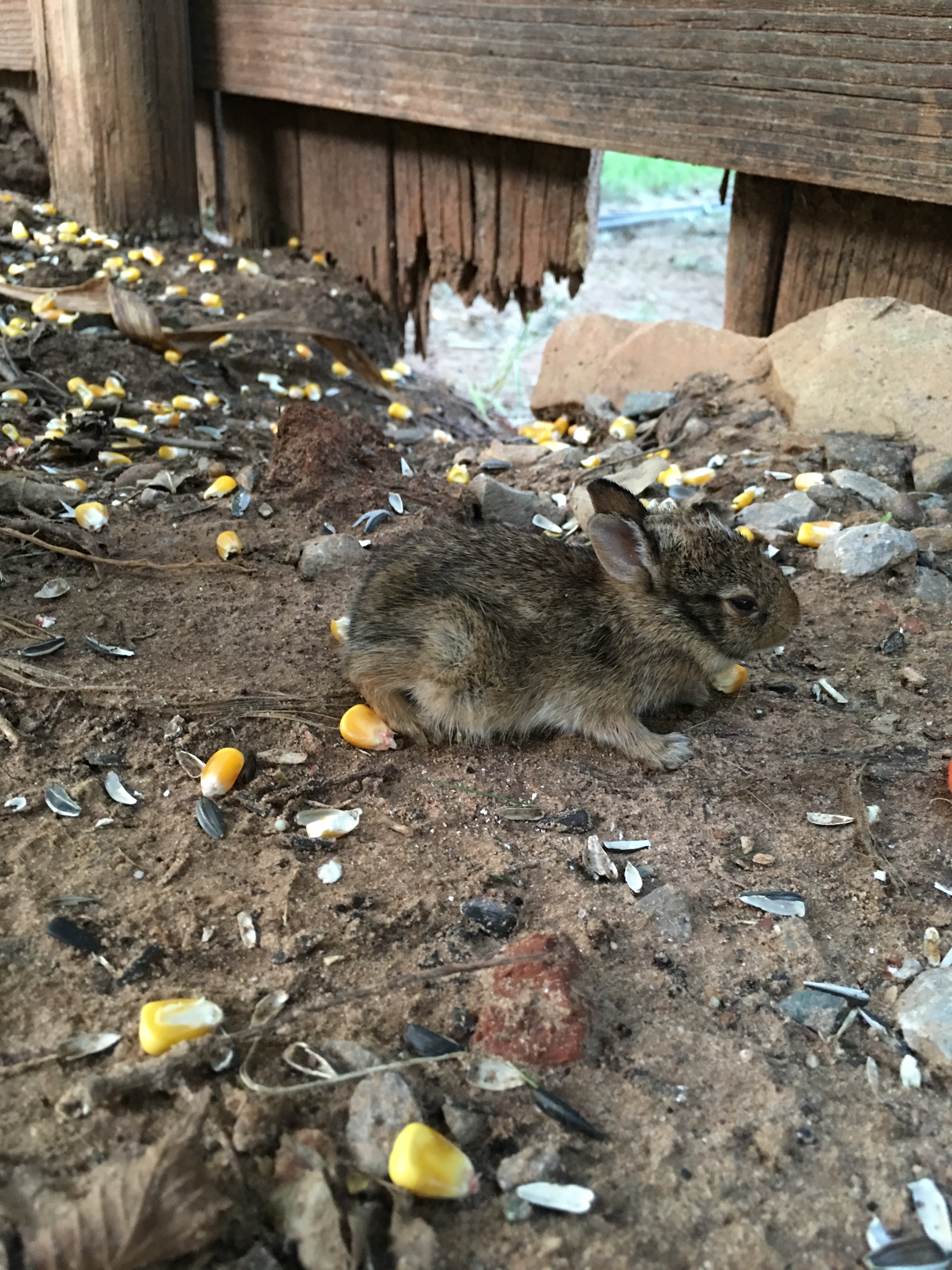