This year marks the 100th anniversary of the journal Genetics, still the premier journal of genetical research in the world. I subscribed to it for decades until e-journals became common, and was proud to have published in it a few times (its peer review was notoriously tough).

For the year 2016, the editors decided to reprint 24 of the most influential papers published in the journal over the last century, and solicit people to write commentaries on them.(Two commentaries per month.) I think that’s a great way to mark the anniversary.

Here’s the first issue of 2016, much of it available free online (click on the screenshot for the contents). The cartoon cover is a first for the journal, depicting the first paper in the journal’s first issue, a classic paper—by Calvin Bridges—whose title is at the lower right:

Bridges (1889-1938) is still a legend in fly genetics: brilliant, unorthodox, and wickedly handsome—a great favorite with the ladies.

The issue starts off with an essay by editor-in-chief Mark Johnston, “A new century of Genetics,” giving a short but lively history of the journal. Then there are the two “classic” papers, and I was honored to be asked to give the commentary on one of them. That paper was published in 1936 by my academic grandfather, Theodosius Dobzhansky, the Ph.D. advisor of Dick Lewontin, my own Ph.D. advisor. It was one of the first attempts to genetically dissect the reproductive barriers between species. (In fact, for most evolutionist those reproductive barriers are what constitute different species.) Click on the screenshot below to see the paper.

I won’t go into detail about what Dobzhansky did except to say that he used genetically marked chromosomes to cross two species, and then used the markers to figure out which chromosomes carried genes making the hybrid males sterile.  In that era you had to use chromosomes marked with visible mutations, causing changes in traits like eye color, body color, or wing shape, so you were limited by the number of chromosome regions you could study (too many mutants kills a fly or makes it weak). Now, with molecular markers, the number of potential chromosome sites to study in this way is in the hundreds of thousands.

Below from the paper is a figure that we call a “Doby-gram” (Dobzhansky was known as “Doby” or “Dodek” to his students and friends), showing the effect of chromosomal constitution on the fertility (estimated as testis length) of backcross males. The white chromosomes are from the fruit flyDrosophila pseudoobscura, and the black from its sister species D. persimilis (then known as “race B” of D. pseudoobscura). You can see that every chromosome has an effect, but that of the X chromosome is HUGE. This is the famous “X effect” that my students and I studied, and the reason for it is now pretty well known. Note the crude hand-drawn graph with wobbly lines, typical of those days.  Such a figure would never be accepted for publication in today’s journals. 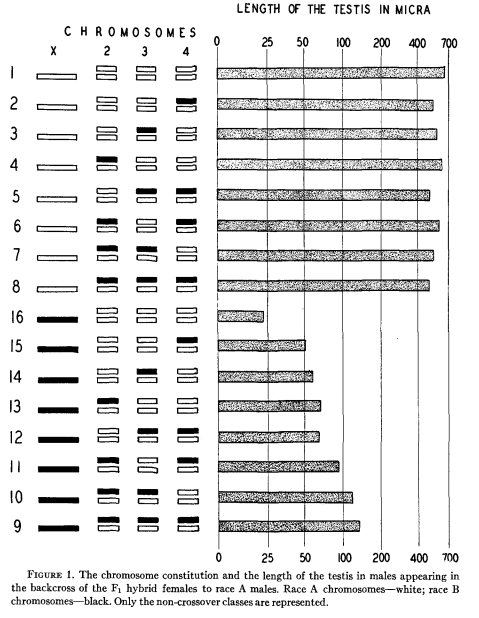 Why is the paper important? Well, I’ll refer you to my very short precis, which you can get for free by clicking the screenshot below: 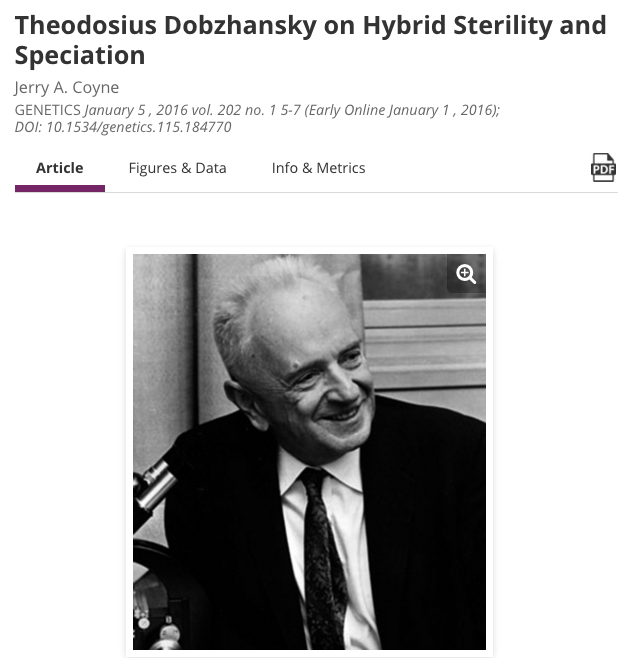 The other famous paper highlighted is Sewall Wright’s 1931 classic (and LONG) work of theory, “Evolution in Mendelian populations.” It’s summarized in a nice introduction by my friend and colleague Nick Barton.
I’m pleased that so many of the 24 papers chosen as classics are in evolutionary genetics, and I’ll have the chance to write a commentary (with colleagues) for another of them before the year is out.

16 thoughts on “100 years of Genetics, and my own contribution to the fête”