There are two scientific figures who are repeatedly accused by theists of being covert believers. One is Albert Einstein, who was clearly someone who didn’t believe in a personal God, said so repeatedly, and was at best a pantheist who saw the laws of nature and the universe as a kind of Ultimate Truth—but not a theistic one.  The other was Charles Darwin, who from time to time is accused of having accepted God on his deathbed. Well, that’s been dispelled as arrant nonsense, but Darwin usually did keep his religious views to himself. That’s probably because he thought that being a public nonbeliever would impede the acceptance of his theory (an early form of accommodationism), but also because his wife Emma was a devout churchgoer, and he didn’t want to make familial waves. (Darwin didn’t go to church.)

But it seems clear to me that Darwin didn’t really believe in the god of his day. He certainly never said he did, except perhaps in one statement in The Origin where his words can be construed as implying that the first form of life was “created.”  Now, however, we get a more open statement of Darwin’s views on religion. From NBC News (thanks to reader David), we have notice of a Darwin letter to be auctioned by Bonhams:

One particularly pointed 1880 letter, soon to be auctioned by Bonhams, was written in response to a Reverend Francis McDermott, whose message asked point blank, “Do you believe in the New Testament?” [JAC: A fuller excerpt from McDermott’s letter is given below.]

“Dear Sir, I am sorry to have to inform you that I do not believe in the Bible as a divine revelation & therefore not in Jesus Christ as the son of God. Yours faithfully, Ch. Darwin.”

You can’t get more terse than that! Now of course he didn’t say he doesn’t believe in God, but that’s not what he was asked.

Here’s a bit of that straightforward letter: 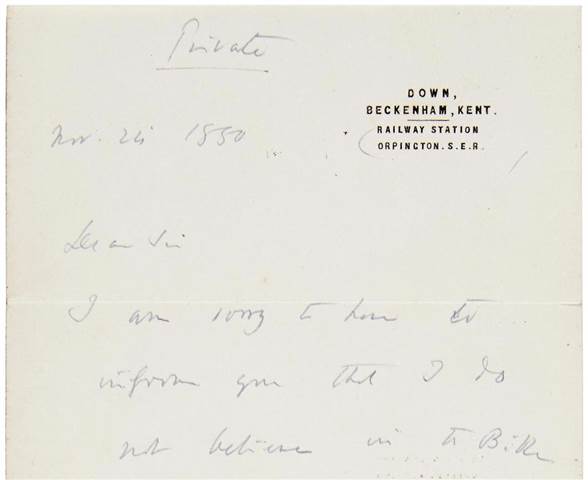 Darwin’s letter is a reply to a young barrister named Francis McDermott who wrote on November 23, 1880 with a very unusual request: “…If I am to have pleasure in reading your books I must feel that at the end I shall not have lost my faith in the New Testament. My reason in writing to you therefore is to ask you to give me a Yes or No to the question Do you believe in the New Testament….” McDermott continues by promising not to publicize Darwin’s reply in the “theological papers”.

McDermott was true to his word and this letter was unknown to scholars for over 100 years. The subject of Darwin’s religiosity had long been a cause of vehement debate. Darwin himself largely refrained from public comment, probably to respect the feelings of his friends and family. Just a month before penning this note, Darwin wrote to the prominent atheist Edward Aveling, “It has … been always my object to avoid writing on religion, and I have confined myself to science.”

Clearly, Darwin was the Neil deGrasse Tyson of his day! (To be fair, Tyson does occasionally criticize religion.)

Darwin studied theology at Christ’s College, Cambridge at the suggestion of his father but preferred to spend his time collecting specimens with a select circle of naturalists. It was Darwin’s mentor John Henslow, a clergyman and a professor of Mineralogy at Cambridge, who nominated the 22-year old Darwin for the history-making voyage on the Beagle. On the Origin of Species by Means of Natural Selection was published in 1859 and it was then that Darwin’s faith in religion or lack thereof became the subject of public controversy. Darwin died in 1882, the greatest naturalist of his age. Rumors of a deathbed conversion were widely believed but firmly denied by his daughter.