I’m not going to get into the long-debated issue of why the tropics are so much richer in species than the temperate zones (theories include physical disturbance, coevolutionary pressures, higher temperature that accelerates evolution, and so on). There is no consensus, but let me just present some data showing the huge difference, data collected in a new paper,”An estimate of the number of tropical tree species,” in the Proceedings of the National Academy of Sciences by J. W. Ferry Silk et al. (and the et. al., as you’ll see, has a gazillion authors). Here are the data from the “nontechnical” abstract (my emphasis)

The technical abstract says the same thing more verbosely (why do scientists feel they have to write in turgid, third-person prose?), and adds this:

Contrary to common assumption, the Indo-Pacific region was found to be as species-rich as the Neotropics, with both regions having a minimum of ∼19,000–25,000 tree species. Continental Africa is relatively depauperate with a minimum of ∼4,500–6,000 tree species. Very few species are shared among the African, American, and the Indo-Pacific regions.

This pattern holds for most taxa, and knowledgeable readers can discuss the theories below. I just wanted to show you the huge difference, one that has now been well quantified for tropical trees, which are often hard to identify.

And here are the authors: 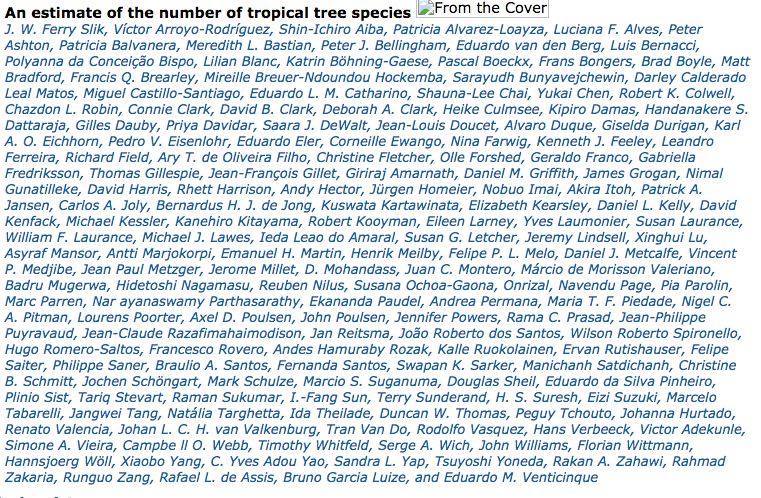 Well, someone had to count all those species!

21 thoughts on “How many species of tropical trees are there?”