Now this paper is way above my pay grade, as it involves all kinds of complicated scanning, computer, and mathematical analysis of a “fishapod” fossil. The conclusion, from a new paper in PLoS ONE by Peter Bishop et al., is that the fossil, Ossinodus sp., shows a callus on its radius (one of the two lower forelimb bones), and that this callosity may represent partial but not complete healing following a fracture (there are suggestions of an infection, and the beast may have died before healing was complete). The analysis suggests in turn that the animal fell nearly a meter onto its leg, breaking the bone. Because such falls presumably cant occur in water, the authors conclude that this creature fell on land.

From this they say that Ossinodus, which dates to 333 million years ago, was a tetrapod—a proto-amphibian living at least partly on land—and that this is the earliest tetrapod known, since before this the oldest indisputable tetrapods come from 327-331 mya. If this report and its conclusions are correct, then, this pushes the earliest invasion of the land back between 2 and 5 million years earlier than previously known.

Here’s the beast, which looks a lot like the famous Tiktaalik, itself likely a transitional form (or something related to one) between fish and amphibians.  Also shown is the callus on the foreleg and the caption from the paper: 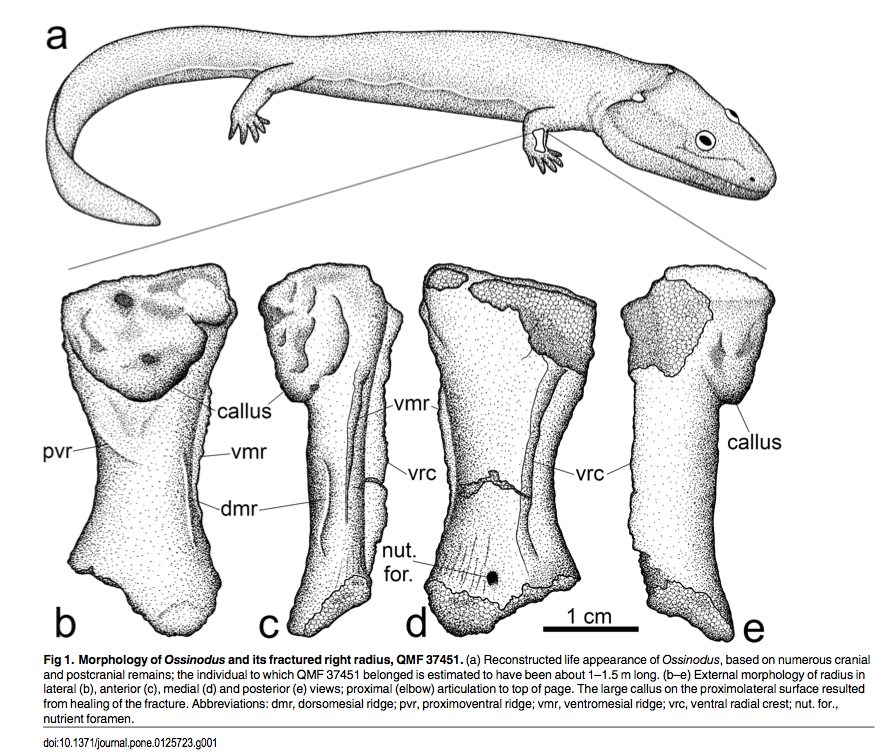 Through CT (computer tomographic) scanning, they were able to visualize through the callus to the bone, and suggest that there was a crack (fracture) indicating that the animal had fallen on its foreleg. Here’s a reconstruction of the fracture; the arrows indicate five different models of weight loading that the authors used to see what might have caused the fracture: 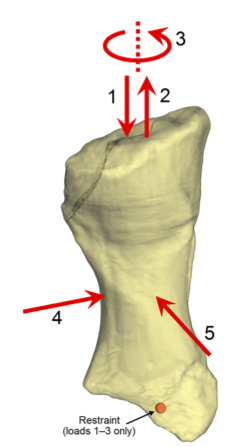 After making these models, calculating the putative weight of the animal (10-25 kg), and making a few other assumptions, they conclude that this fracture must have resulted from a fall of between 0.85 to 1.1 meters, or about three feet. They say this could not have happened in the water, and, ruling out other explanations, argue that this shows pretty clearly that the animal was terrestrial. In their view, the invasion of land had begun. From the paper:

As all of the estimations and assumptions underpinning the above calculations have been made on the conservative side (e.g., the purposeful overestimation of body mass), we are confident that the force required for the radius to fracture in the manner it did was very large, and that a fall on land is entirely possible from a mechanical perspective. Consistent with a fall hypothesis, the mode of displacement along the fracture (Fig 7a) is very similar to that of proximal radius fractures in humans which result from a fall onto an outstretched arm, where the humerus impacts upon the radial head [33,34]. Since the force required for fracture in the FEA was a distributed load, this excludes the possibility that it resulted from a bite (predatory or otherwise), where an impacting tooth would produce a spatially concentrated load. We therefore conclude that the most plausible explanation for the fracture in the radius of Ossinodus was that the animal was living on land and sustained a fall.

And they claim, with confidence, that the species antedates the next oldest terrestrial vertebrate by several million years:

This is an intriguing finding, and the authors did a huge amount of work.  It’s possible that they are indeed correct, but I have some questions about the assurance of the authors’ conclusion. Some of these caveats may reflect my ignorance of the analysis, for it’s indeed complicated, and readers with biomechanical interests should read the paper, which is available free at the link below.

1. Was the creature terrestrial? We don’t know. The fossil was of course found in sedimentary rock, i.e., it was buried underwater. Ossinodus could have been semi-aquatic, like early amphibians must have been, but it could have been fully aquatic. There is no independent evidence, beyond the broken radius, that it was partly or fully terrestrial.

2. Does the pathology unequivocally demonstrate a fall-induced fracture? I’m sure there are other explanations for this dysplasia, or even the crack (if it was indeed a fracture that occurred during life), including developmental anomalies. Can we rule out all other causes (including bites) with enough confidence to conclude this was a fall on land? Is there any evidence that fish break bones in the same way?

3. The sample size is small. We have a single individual with a single broken forelimb bone. Is that sufficient to lead to such sweeping conclusions? It would be nice to either have samples with other broken bones, or some other indication of terrestriality.

In sum, we have an intriguing finding here, and the authors may well be correct, but I’m not sufficiently convinced by the data—and the complicated analysis—to conclude that we have an animal that was unequivocally terrestrial or amphibious. Were I the authors, I would hedge my bets a bit more than they did when claiming they’d found a “biomechanically demonstrable” terrestrial tetrapod.

I also wonder why they published the article in PLoS ONE, a journal which has a less rigorous review process than journals which vet things not just for the soundness of the analysis, but for the novelty of the findings. If I had unequivocal evidence of the earliest land animal, as the authors say they do, I would have sent it to Nature or Science.

As I said, some of my questioning may reflect my naivité about the methods and analyses, but the earliest known tetrapod really deserves publication in a more visible journal.