I believe it was a reader who sent me a link to the first video below, but I can’t remember that reader’s name, so my apologies. But when I saw the video of ants pulling prey back to the nest by forming a long daisy chain, linking their bodies by biting each other to increase pulling power, I couldn’t believe it. I had neither heard of nor seen any insect behavior like this. Watch these ants hauling a millipede back to the nest:

I wrote to Dr. Phil Ward, one of our three Official Website Entomologists™, asking him if these were army ants. He responded this way, “Pretty cool, eh? These are ants in the genus Leptogenys, forming daisy-chains to more effectively pull their prey back to the nest. Alex Wild posted about this last year.” But they are not army ants; as Phil said, “No, they are group-raiding ponerine ants, with some army-ant like behavior: army ant wannabes.”

He then gave me a link to a post of Alex Wild, another Official Website Entomologist™ (Piotr Naskrecki is the third), who had posted about this behavior on his website Myrmecos:

The quality isn’t great, but the clip appears to show an Asian Leptogenys daisy-chaining their bodies in parallel lines to haul away a large millipede. I have spent the morning searching the technical literature for mention of this unusual behavior, and am coming up empty. Some Leptogenys species, including L. diminuta, L. nitida, and L. processionalis, are known to forage in groups and transport prey “cooperatively” (source, source). What is meant by “cooperative” is often vague. (For more, see this excellent recent review of cooperative transport by Helen McCreery).  Yet I didn’t find any explicit description of workers linking up, mandible to abdomen, to pull together.

Yes, they’re forming these chains by biting each other’s butts! You can see that more clearly in the video below. Alex continues:

Is ponerine daisy-chaining an unknown behavior? Possibly. It is also possible my search skills aren’t up to the task. If you know of a description of it, please drop a note in the comments.

Alex found another video and posted it later:

Alex also posted a photo of similar behavior, also in the same genus, taken by Steve Shattuck in Borneo. In this case the ants appear to make the chain by biting each other’s legs: 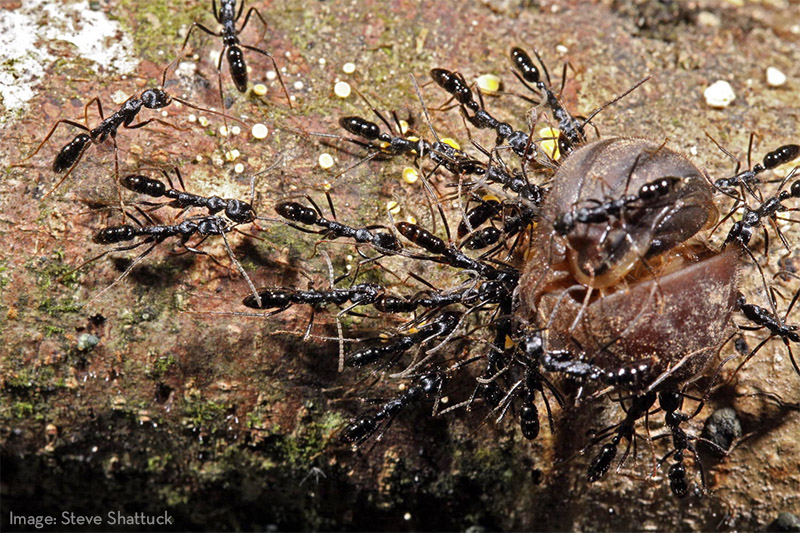 In his post, Wild quotes ant expert Christian Peeters who saw the behavior in Borneo:

Back then I reviewed the literature and found no other record of chain behaviour in Ponerinae. No record of millipede predation in Leptogenys.  Specialized hunting on millipedes is restricted to Thaumatomyrmex,Probolomyrmex and Gnamptogenys, but these are solitary hunters on a very different kind of millipedes (polyxenids).

Finally, Alex notes that because the first video appeared on LiveLeak, without attribution or information, we know nothing about who filmed it nor about where or when it was filmed, making it hard to do further study. The behavior is fascinating but so far has not been published in the scientific literature. I’m also curious about whether the leg-biting vs. abdomen-biting method of forming the chains are behaviors specific to particular species (I expect this is the case).

When you think about how this evolved, remember that the ants doing the dragging are sterile workers (they’re eusocial, as we’ve been discussing), so they themselves gain no reproductive advantage by behaving this way. Any evolutionary scenario based on natural seletion has to show an advantage to these ants that can contribute genes for the behavior to the next generation. I’ll leave it to readers to solve this apparent puzzle, which holds for all evolved behaviors of sterile workers.

By the way, head over to Piotr’s wonderful site, The Smaller Majority, and see his latest post about a red-headed fly from Mozambique. There is a lot of swell biology in the post, but I’ll just show the flies, which will make Matthew Cobb wet his pants. (Captions fare from Piotr’s post.)

25 thoughts on “A novel but clever behavior: ants form daisy chain to haul prey back to nest (and fly lagniappe)”