Today’s Jesus and Mo strip, called “Brave,” is perfect; there’s nothing I can add but to link you to an excellent Atlantic article on the Charlie Hebdo affair by Jeffrey Goldberg, “The dangerous myths about Charlie Hebdo” (h/t: reader Cindy). It should be mandatory reading for those thick-skulled PEN members who understand neither the magazine’s aims nor the principle of free speech. 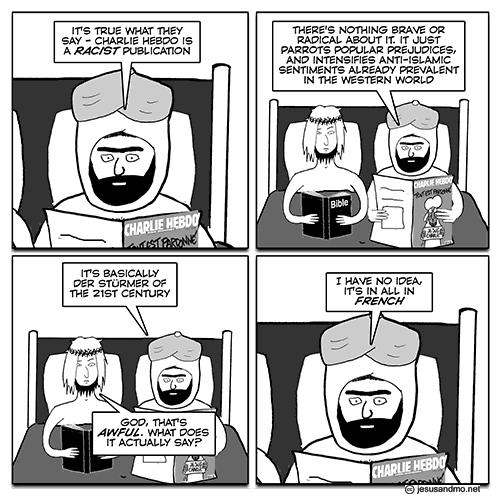 I can’t resist giving an excerpt from Goldberg’s piece, one of the best articles written about the whole affair:

Another myth: Charlie Hebdo is interested in advancing a “narrative” of “white privilege,” and therefore specializes in ridiculing powerless people.

The novelist Francine Prose, one of the writers protesting the PEN award to Charlie Hebdo, wrote recently that, “The narrative of the Charlie Hebdo murders—white Europeans killed in their offices by Muslim extremists—is one that feeds neatly into the cultural prejudices that have allowed our government to make so many disastrous mistakes in the Middle East.”

Prose’s coldness toward the victims of violence matches Trudeau’s. The 12 people killed at Charlie Hebdo were not extras in a George W. Bush-scripted imperialist narrative. They were human beings who were murdered because they offended the beliefs of theocratic fascists.

Goldberg also has a few choice words for Garry Trudeau, the Ben Affleck of cartoonists.