Today’s Google Doodle (screenshot below, click on it to go to it) celebrates the 126th anniversary to the day of the opening of the Eiffel Tower.  And it’s a particularly lovely one, isn’t it?: 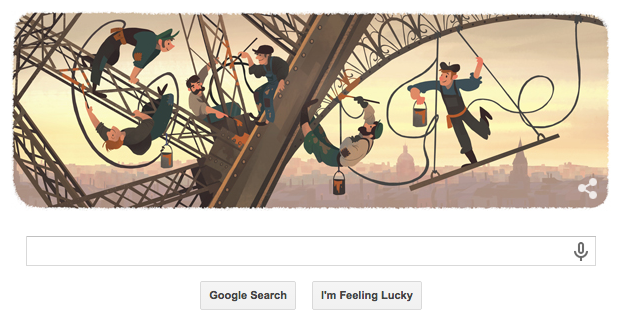 Construction of the iron lattice structure, named after engineer Gustave Eiffel, began on Jan. 28, 1887. Despite the early protests, the tower was an instant hit, with an estimated 30,000 people climbing its steps in the first weeks — before even an elevator was installed.

Eventually, it grew into a worldwide landmark; as TIME wrote during last year’s 125th anniversary celebrations, “the tower became more than a tower, and more than a symbol of Paris.”

At 1,063 ft. high, it was the tallest man-made structure in the world for over four decades, until it was surpassed by New York City’s Chrysler Building in 1930.

The Doodle itself features a group of supposedly French painters hanging precariously from the tower as they beautify the Grande Dame of Paris.

But they left out the artist, which The Guardian helpfully supplies:

The doodle, by French visual development artist Floriane Marchix [JAC: Her website is here], shows the tower being painted by cheery workmen in berets and overalls, swinging from the tower.

I have to confess that although I must have lived in Paris for a year in the three long stints I was there, I never went up the tower, nor had the desire to (there’s also a restaurant, the Jules Verne, halfway up, and it’s said to be good).  And if you’re somewhat morbid, you’ll want to know that jumping off the Tower is the third most popular means of suicide in France, after hanging and poisoning. A happier note: one woman who jumped survived after landing on the roof of a car, and later married the owner of the car!

22 thoughts on “Google Doodle celebrates opening of the Eiffel Tower”