The case of Emerson T. McMullen, the Georgia Southern University (associate) professor of history who foists creationism on his students (see here for my previous posts on the matter) is getting more publicity, now on the national level.  Earlier, the Freedom from Religion Foundation (FFRF) and the Richard Dawkins Foundation for Reason and Science formally complained to the administration about McMullen’s activities, and both the FFRF and I have notified the biology department.

Now the journal Inside Higher Education (IHE) has done its own report: “Extra-credit creationism?” by Coleeen Flaherty.

If you’ve kept up on this, you’ll already know the allegations in the case, which constitute most of the IHE story, but there’s a few new bits. McMullen, for example, has responded: IHE quotes McMullen from the local newspaper in Statesboro, Georgia:

McMullen did not respond to a request for comment. In an interview with the Statesboro-Herald, he denied trying to convert his students or preaching creationism, but also confirmed his disbelief in evolution.

“In some of my classes, like for instance, World History I, we’re doing Jainism, Buddhism, Hinduism, Judaism and then Christianity, and then later Islam, and also, I might add Zoroastrianism, Manichaeism,” he told the newspaper. But, he said, “I don’t buy that we descended from a common ancestor.… I don’t accept that as a scientist. I was an agnostic, thought science had the answers and, investigating science, I realized science didn’t have all of the answers, including descent from a common ancestor, and then came to believe in God.”

McMullen’s Ph.D. is in the history and philosophy of science, he also has a master’s of science in engineering administration.

Well, whether or not you consider those degrees qualify McMullen as a “scientist” (he’s certainly not doing science), this is about the worst thing he could have said to the paper. “No comment” would have been more judicious, especially in light of these comments from students who took his class: 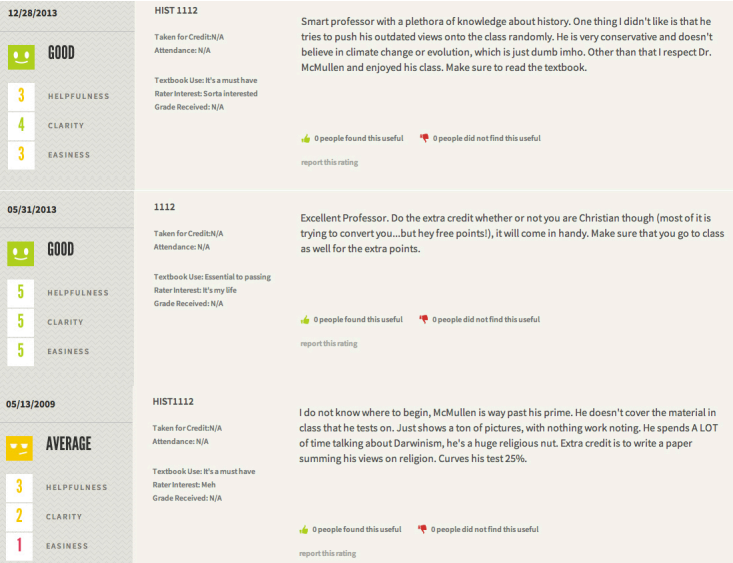 The Statesboro paper quotes McMullen further trying to exculpate himself:

In discussing the role of science in history, McMullen talks about a number of scientists and philosophers whose views have been controversial, he noted, listing examples.
“So we cover a lot of topics that could be interpreted as me preaching in the classroom. I don’t preach creationism,” McMullen said. “Basically, we’ve got across-the-board, broad-brush charges by the Freedom From Religion Foundation and Dawkins’ Foundation.”
The extra credit assignment involving God’s Not Dead was to write about one particular scene, in which a professor and a student debate whether God exists, McMullen said.
With two classes given this option, he said, about half the students wrote about the movie, and all who did so received full extra credit. He said he also offered another extra credit option but no students asked for it.

This semester, McMullen gave students an extra-credit choice of writing about a talk he gave on John F. Darly Jr., a local man who served as a World War II medic on D-Day in Europe and was later killed in action on Iwo Jima. The alternative was to write about McMullen’s paper “No Evidence for Evolution: Scientists’ Research and Darwinism.”

Not preaching creationism? What the deuce is this about then? What does creationism have to do with D-Day or John F. Darly, Jr. ? The Statesboro paper goes on:

The majority of students who took the extra credit, he said, chose to write about the Darly talk, which he also made available online.
McMullen confirmed that the model essay answer with the 11 lines of cons and two lines of pros for evolution was his.
In every case, he said, students can disagree with him without being penalized.
“They can. I don’t mark them down or anything like that,” McMullen said. “They can disagree. That’s what the whole thing about academia is, you know, that there’s a freedom of thought to examine different issues.”

Yes, but of course McMullen, caught here with his pants down, never asked the students to analyze an essay by Richard Dawkins or anyone else who accepts evolution. As for making the students see “God is Not Dead,” well, that speaks for itself. McMullen is forcing his views of Christianity and creationism down the throats of his students, period.  There may be “freedom of thought” for the students to dissent in their essays, but where will they get the evidence for evolution? And do they get extra credit for seeing atheist movies (if there are any)? Nope. Freedom of thought requires that you adjudicate diverse and conflicting opinion and information.

IHE quotes Professor Ceiling Cat, as I was interviewed by Ms. Flaherty:

Jerry Coyne, a professor of ecology and evolution at the University of Chicago, runs a blog called Why Evolution Is True and reviewed some of the allegations and evidence against McMullen for the Freedom from Religion and Richard Dawkins foundations. He’s quoted in their letter as saying that “virtually everything [McMullen] says about evolution is dead wrong. He’s teaching lies to students and pushing a religious viewpoint.”

In an interview, Coyne said that McMullen appeared to be doing far more proselytizing in his classes than others who have been investigated and reprimanded following such allegations in recent years. Eric Hedin, an assistant professor of astronomy and physics at Ball State University who was investigated last year for proselytizing in a class called “Boundaries of Science,” for example, asked students to read intelligent design proponents.

McMullen, on the other hand, allegedly was “giving students credit for reading and analyzing articles about his own religious beliefs,” Coyne said. “This is just the worst, most embarrassing kind of creationism.”

Coyne said he was confident that the university would find McMullen in violation of the First Amendment, which dictates the separation of church and state. Coyne, noted, however, that the teaching of creationism at the college and university level has never been legally tested.

I told the reporter that both the FFRF and I had called McMullen’s activities to the attention of Georgia Southern’s Biology department, and suggested that she call its chairman for a statement. Apparently she did, and, as I expected, the response was “no comment”:

Stephen P. Vives, chair of the university’s biology department, declined to comment, citing the ongoing investigation. But the department’s webpage says it “recognizes the foundational importance of evolutionary theory to all of modern biology, and is in full agreement with the Society for the Study of Evolution’s statements on evolution and on the teaching of evolution.”

Well, if Vives referred the reporter to the webpage, that was a good enough response. If he didn’t, and she found the statement herself, then the chairman was derelict in his response, regardless of the investigation. Any biology chairperson should be able to say, “Our department accepts the truth of evolution” without compromising an investigation.

In the end, McMullen will be forced to curtail his “preaching,” even if he says he didn’t do it. His claim, of course, contradicts all the evidence we have. The man is an old-fashioned creationist, short-changing the students of Georgia Southern by teaching them lies about biology. Many of them, raised in the heavily Christian southern U.S., may find these lies congenial. But college is supposed to challenge your ideas, and what better challenge is there than the truth about nature?