As most of us know, the Qur’an is supposed to be the direct and unfiltered word of Allah as dictated to Muhammad, and metaphorical interpretations of the Qur’an aren’t nearly as acceptable as they are for, say, the Bible.  The Jesus and Mo author reminds us of this, and of the insanity of “inerrant books”. The author’s sent a commentary along with the usual notification about a new strip:

No sentient adult should have a “holy scripture”. To do so is a complete abnegation of intellectual responsibility. A cop out. A cheat as blatant and shameful as a schoolboy copy-pasting his homework from the internet. There is no excuse for it. 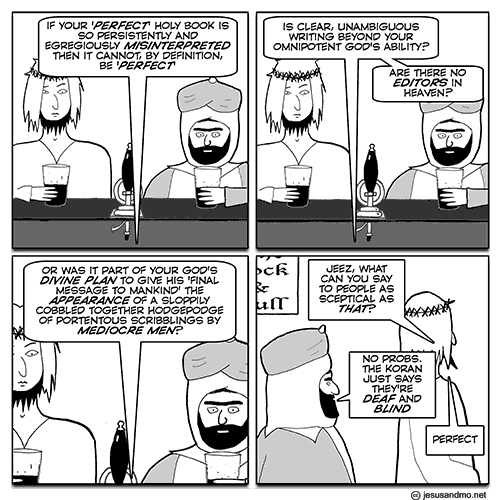 Apropos of this, Ali A. Rivzi, an ex-Muslim and Canadian physician, has written a piece in PuffHo called “An Open Letter to Moderate Muslims,” which is worth reading.  In it, he argues that moderate Muslims are enabling their more extremist and more vicious jihadi counterparts, but not because the moderates refuse to speak up. Many are speaking up, at least against the brutality of ISIS. No, it’s because the moderates still swear fealty to the Qur’an, a supposedly inerrant book, but then try to parse it so that it appears less brutal and oppressive than it is. Rivzi thinks that behavior turns off Westerners. Remember, he’s addressing moderate Muslims here:

Like other moderates, Reza Aslan frequently bemoans those who read the Quran “literally.” Interestingly enough, we sort of agree on this: the thought of the Quran being read “literally” — or exactly as Allah wrote it — unsettles me as much as it unsettles Reza.

This is telling, and Reza isn’t alone. Many of you insist on alternative interpretations, some kind of metaphorical reading — anything to avoid reading the holy book the way it’s actually written. What message do you think this sends? To those on the outside, it implies there is something lacking in what you claim is God’s perfect word. In a way, you’re telling the listener to value your explanations of these words over the sacred words themselves. Obviously, this doesn’t make a great case for divine authorship. Combined with the claims that the book is widely misunderstood, it makes the writer appear either inarticulate or incompetent. I know that’s not the message you mean to send — I’ve been where you are. But it is important to understand why it comes across that way to many non-Muslims.

If any kind of literature is to be interpreted “metaphorically,” it has to at least represent the original idea. Metaphors are meant to illustrate and clarify ideas, not twist and obscure them. When the literal words speak of blatant violence but are claimed to really mean peace and unity, we’re not in interpretation/metaphor zone anymore; we’re heading into distortion/misrepresentation territory. If this disconnect was limited to one or two verses, I would consider your argument. If your interpretation were accepted by all of the world’s Muslims, I would consider your argument. Unfortunately, neither of these is the case.

. . . Unfortunately, this is what’s eating away at your credibility. This is what makes otherwise rational moderate Muslims look remarkably inconsistent. Despite your best intentions, you also embolden anti-Muslim bigots — albeit unknowingly — by effectively narrowing the differences between yourselves and the fundamentalists. You condemn all kinds of terrible things being done in the name of your religion, but when the same things appear as verses in your book, you use all your faculties to defend them. This comes across as either denial or disingenuousness, both of which make an honest conversation impossible.

So what’s the solution? To give up the idea of the Qur’an as inerrant, which eliminates the torturous Islamic apologetics:

This presents an obvious dilemma. The belief that the Quran is the unquestionable word of God is fundamental to the Islamic faith, and held by the vast majority of Muslims worldwide, fundamentalist or progressive. Many of you believe that letting it go is as good as calling yourself non-Muslim. I get that. But does it have to be that way?

Having grown up as part of a Muslim family in several Muslim-majority countries, I’ve been hearing discussions about an Islamic reformation for as long as I can remember. Ultimately, I came to believe that the first step to any kind of substantive reformation is to seriously reconsider the concept of scriptural inerrancy.

Well, that all sounds good, and Rivzi has the best of intentions, but I don’t think it will work.  His model is the way Jews (and by default, Christians) treat the Old Testament, which, if taken literally, is, like the Qur’an: rife with violence, calls for genocide, and untenable moral commands. How do Jews and Christians deal, say, with scriptural dictates to kill adulterers, kids who disrespect their parents, and people who work on the Sabbath? They simply ignore that stuff, and cherry-pick the good verses.  Yet that is precisely what Rivzi says is not working in Islam, and not because Muslims won’t do it—but because it makes Muslims look inconsistent to Westerners.

I don’t get it. If that kind of metaphorical verse-twisting is de rigueur for liberal Christians and Jews, who are used to it, why can’t Muslims do exactly the same thing? Yes, other Muslims may say that it’s impossible: the Qur’an must be read literally. But Rivzi is talking about how Westerners perceive Muslim “moderates,” not how other, more extremist Muslims do. How many Westerners even know that the Qur’an is traditionally read as inerrant—or even that it’s supposed to be Allah’s dictation to Muhammad over a number of years?

So when Rivzi says this—”When the literal words speak of blatant violence but are claimed to really mean peace and unity, we’re not in interpretation/metaphor zone anymore; we’re heading into distortion/misrepresentation territory”—it’s just as true of the other two Abrahamic faiths as it is of Islam.

There is no substantive difference between considering scripture inerrant, but interpreting some of the “inerrant” verses as allegories, and accepting scripture as fallible and simply ignoring the verses you dislike. After all, even Christian literalists, with the exception of people like William Lane Craig, gloss over the “nasty” verses of the Bible to help sanitize their faith. And they don’t lose credibility with their fellow believers, either: they lose credibility only with rational people who regard cherry-picking as both hypocritical and indicative of a morality independent of God.

And really, how easy would it be to persuade Muslims, who venerate the Qur’an (Rivzi describes some of this behavior in his longish piece), to start seeing it as fallible—not the word of God but of man? The tradition of a non-metaphorical interpretation of God’s words is much more pervasive in Islam than in Judaism and Christianity.

I fear Rivzi is asking the impossible. He might as well ask the moderates what many of us atheists want: to give up Islam entirely.