In a facetious homage to Jerry’s post below, I thought I’d bring this to readers’ attention. How Green Were The Nazis? is the title of this collection of  papers with a rather striking cover: 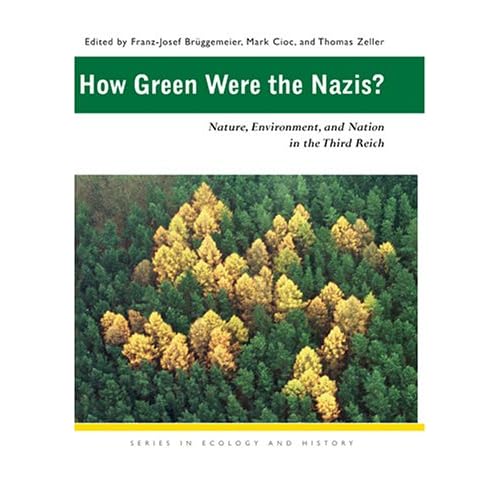 More amusingly, the book was a candidate in the 2007 Diagram Prize, which is awarded each year by the readers of the UK booktrade magazine The Bookseller to the book with the oddest title. Sometimes, oddness is in the eye of the beholder (one competitor, Baboon Metaphysics, sits happily on my bookshelves and is a cracking read). Mainly however, they are indeed pretty weird, such as Tattooed Mountain Women and Spoon Boxes of Daghestan, Crocheting Adventures with Hyperbolic Planes or How to Avoid Huge Ships, all of which won the coveted title.

In 2007 the Today Programme on BBC Radio 4 launched a competition in which listeners were invited to write the opening to one of the weird-titled books that were in the competition that year. The winner was Tim Sanders, who wrote a spoof intro to How Green Were The Nazis:

The sound of creaking leather from their collective greatcoats broke the silence as the assembled Wehrmacht officers leaned forward to examine the huge table map of the Spreewald, the vast forest area standing between the XI SS Panzer Corps and the Red Army.

The problem was clear – vast stretches of gorse in the forest (Ulex europeus) were in flower and it was the nesting season of the rare inversely-spotted bark-spitter.

“Well, gentlemen” General Busse announced to his colleagues “there is no way we can attack them through the forest – the damage to the environment would be too great. Our panzer tanks still emit excessive CO2 and the electric hybrid version is still on the drawing-board.”

The other officers grunted in assent. There were those amongst them who could still recall the terrible Battle of the Somme in 1916 – how entire woods were destroyed, how the crash of the shells broke the noise abatement regulations as far away as Camden and how the noxious exhaust from the infernal English tanks caught the back of the men’s throats.

“However” the General continued, “I have developed a strategy that I believe you will find is sufficiently eco-friendly. The XI Panzer will move forward by bicycle on the left flank, the SS Mountain Corps will take the right flank using public transport – there is still a regular bus service from Lűbben after 10 o’clock – and we will sent a small diversionary unit through the forest. But I must spell out one important message for them: keep to the paths and no shooting!”

22 thoughts on “How green were the Nazis?”