In March the Smithsonian Museum of Natural History in Washington D.C. opened the David H. Koch Hall of Human Origins.  Last week Greg Mayer wrote a comprehensive review, pointing out the good and bad aspects of the exhibit.  I offer here a short supplement giving some highlights and lowlights. And let’s face it: any evolutionist is going to be critical of somebody else’s exhibit!

First, the entrance to the hall is, um, unprepossessing (as always, clicking on the photos will enlarge them): 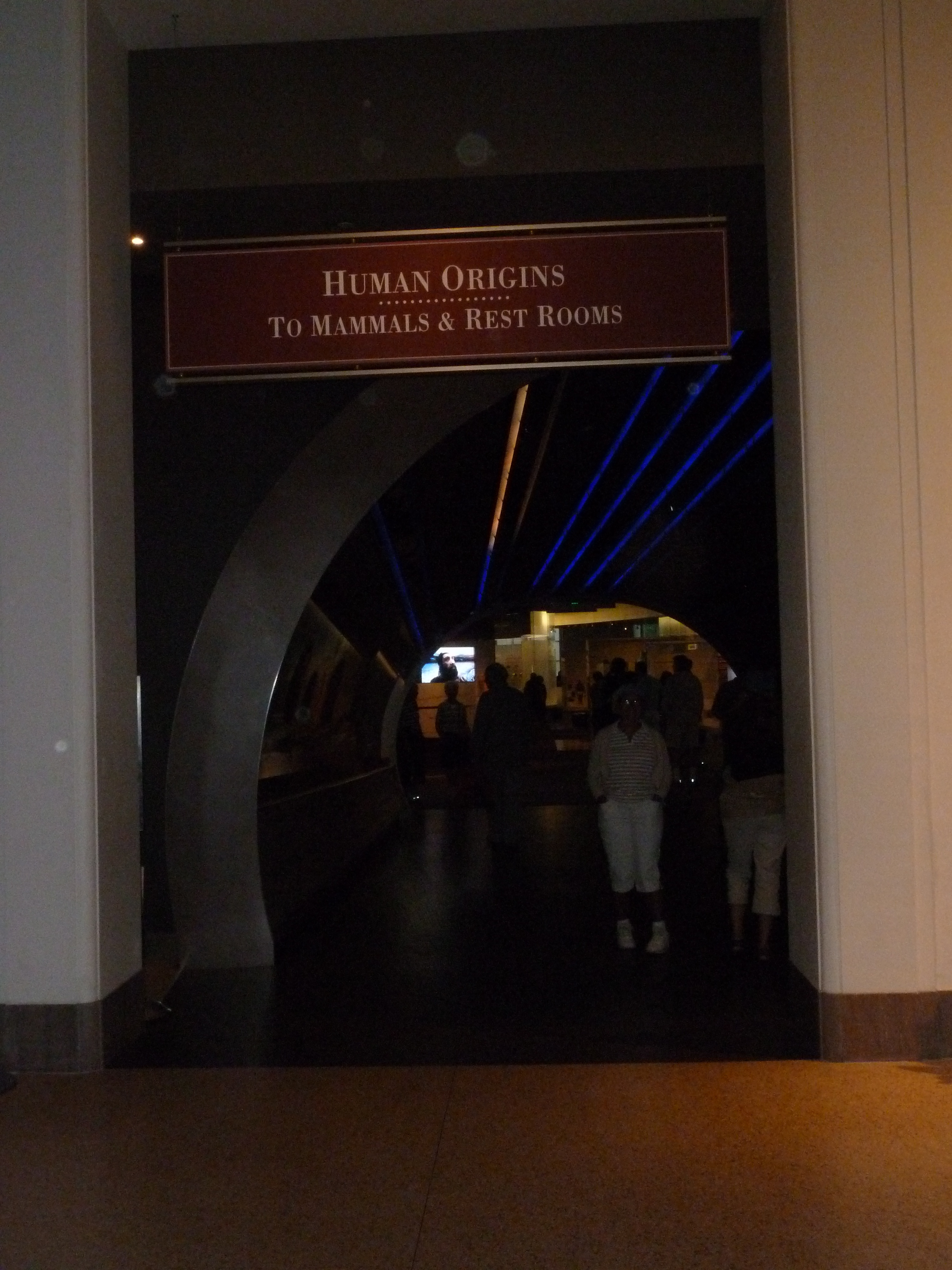 A video exhibit near the entrance has both good and bad stuff. The exposition of the word “theory” is pretty good: 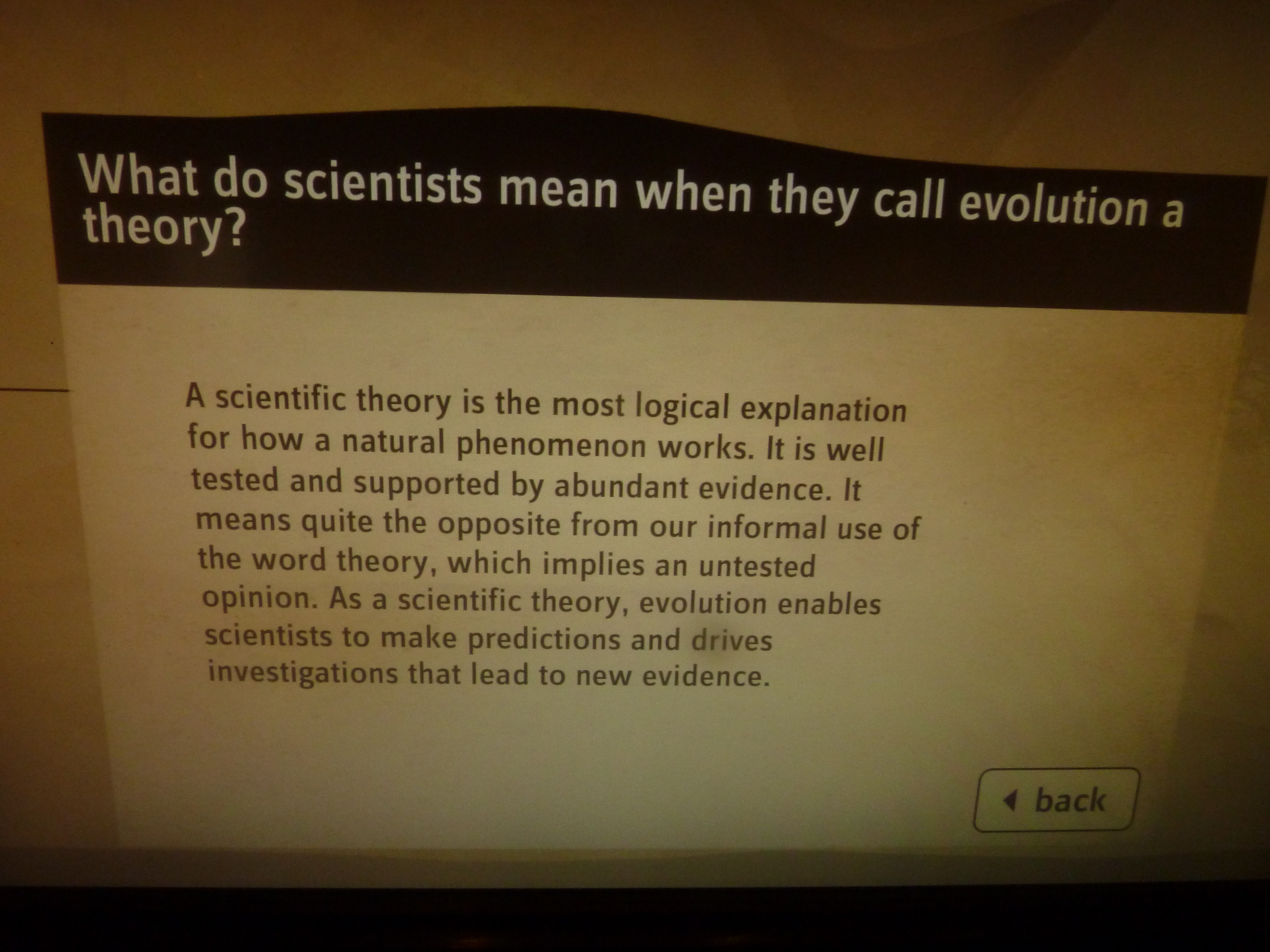 And so is the theme of exhibit, which is this: “how do we know what we say we know?”  This emphasis on evidence is estimable but, as Greg pointed out, the answers are provided not by the scientists who made the exhibit but by the viewer herself.  This exhibit of skulls has that postmodern fill-in-the-blanks air about it: 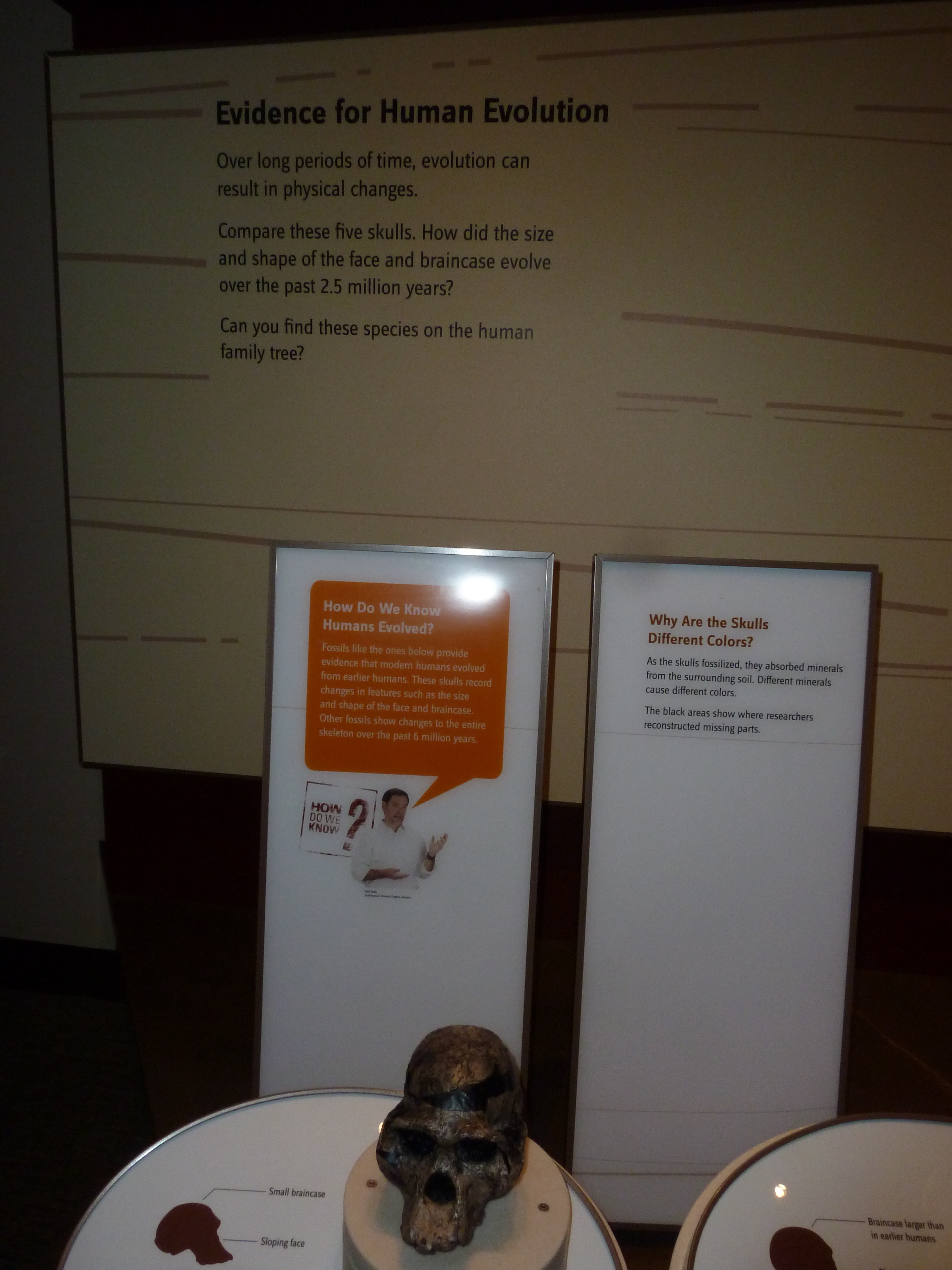 Close by is the hominin family tree. Note that it’s a branching bush, which is good, but it also puts the australopithecines off by themselves and not as the ancestors of Homo.  Unless there’s been some paleoanthropological advance of which I’m not aware, I think this question is unresolved, and maybe a question mark would have been better: 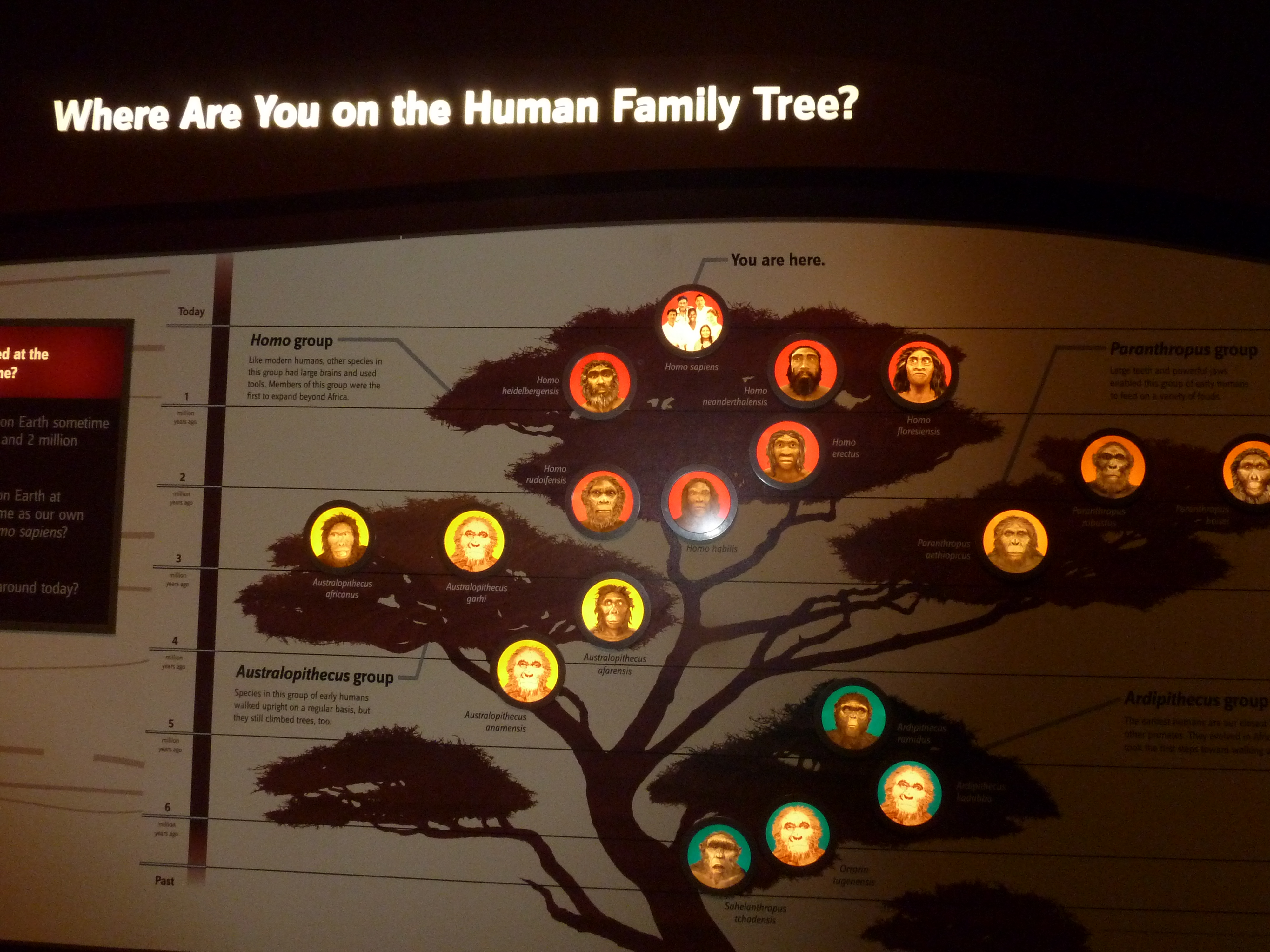 Here’s a life-size cast of the “hobbit,” Homo floresiensis, which may have lived as recently as 12,000 years ago.  Although its status as a species is controversial, evidence is slowly accumulating that hobbits were a genuine relict population of hominins.  And they were tiny: a bit more than three feet tall. Here I am standing next to one: 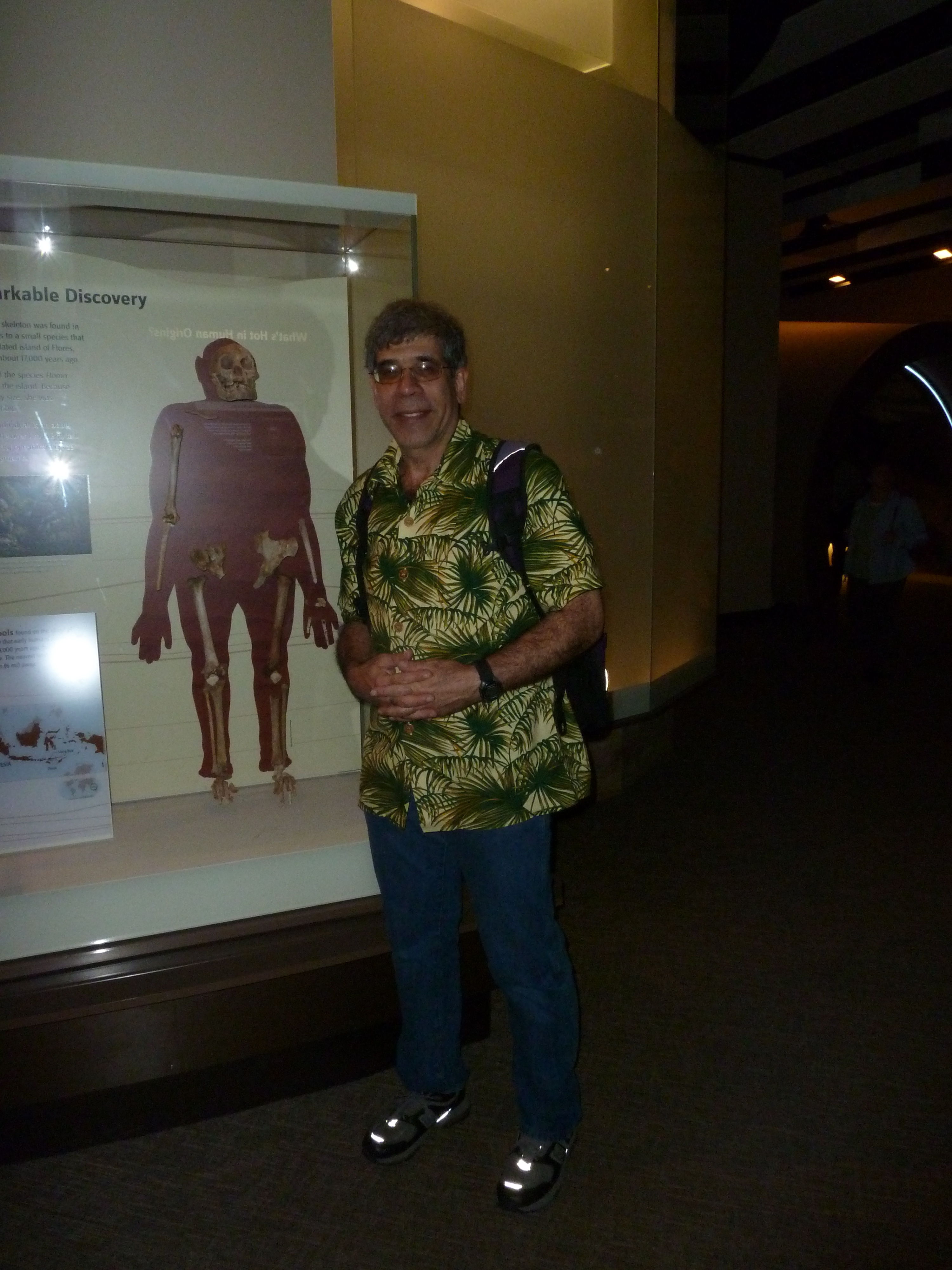 Our genetic similarity to chimps, our closest living relative, is a statistic that’s often abused.  The “99% identity” refers to the probability of identity at each nucleotide site in the DNA.  But since each gene comprises many nucleotide sites, the probability that a given gene has identical DNA sequences in humans and chimps is much lower.  In WEIT, I show that about 80% of all the proteins shared by the two species differ by at least one amino acid.  Depending on how you calculate the statistics, then, you can make humans and chimps look either 99% identical or only 20% identical.  The Smithsonian exhibit isn’t clear on this point. 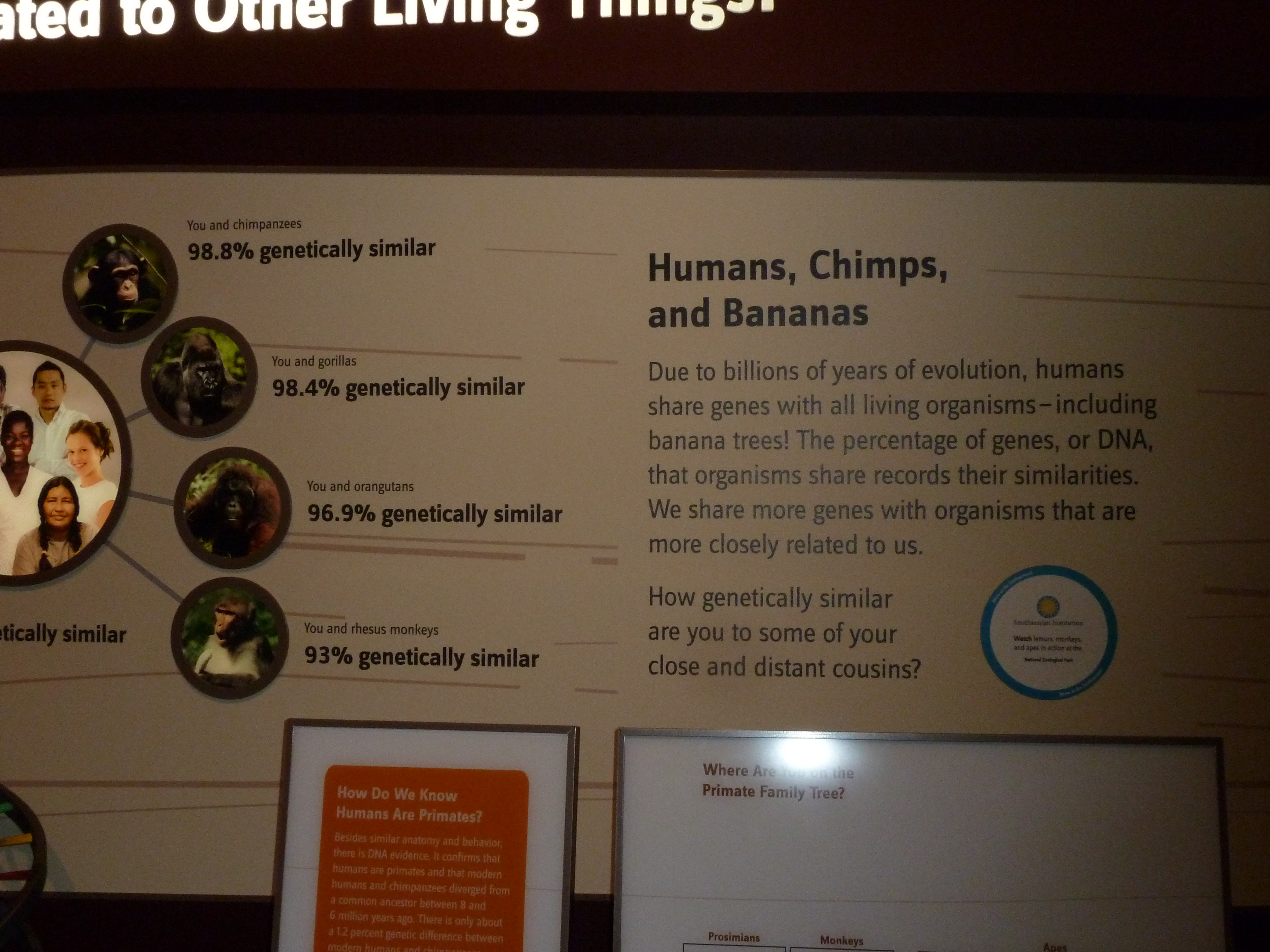 For me, the most annoying part of the exhibit was this purported explanation of how evolution works.  It simply equates evolution to natural selection.  And of course natural selection is only one of several processes that can cause evolutionary change (genetic drift, the random change of gene frequencies due to sampling error, is another big one): 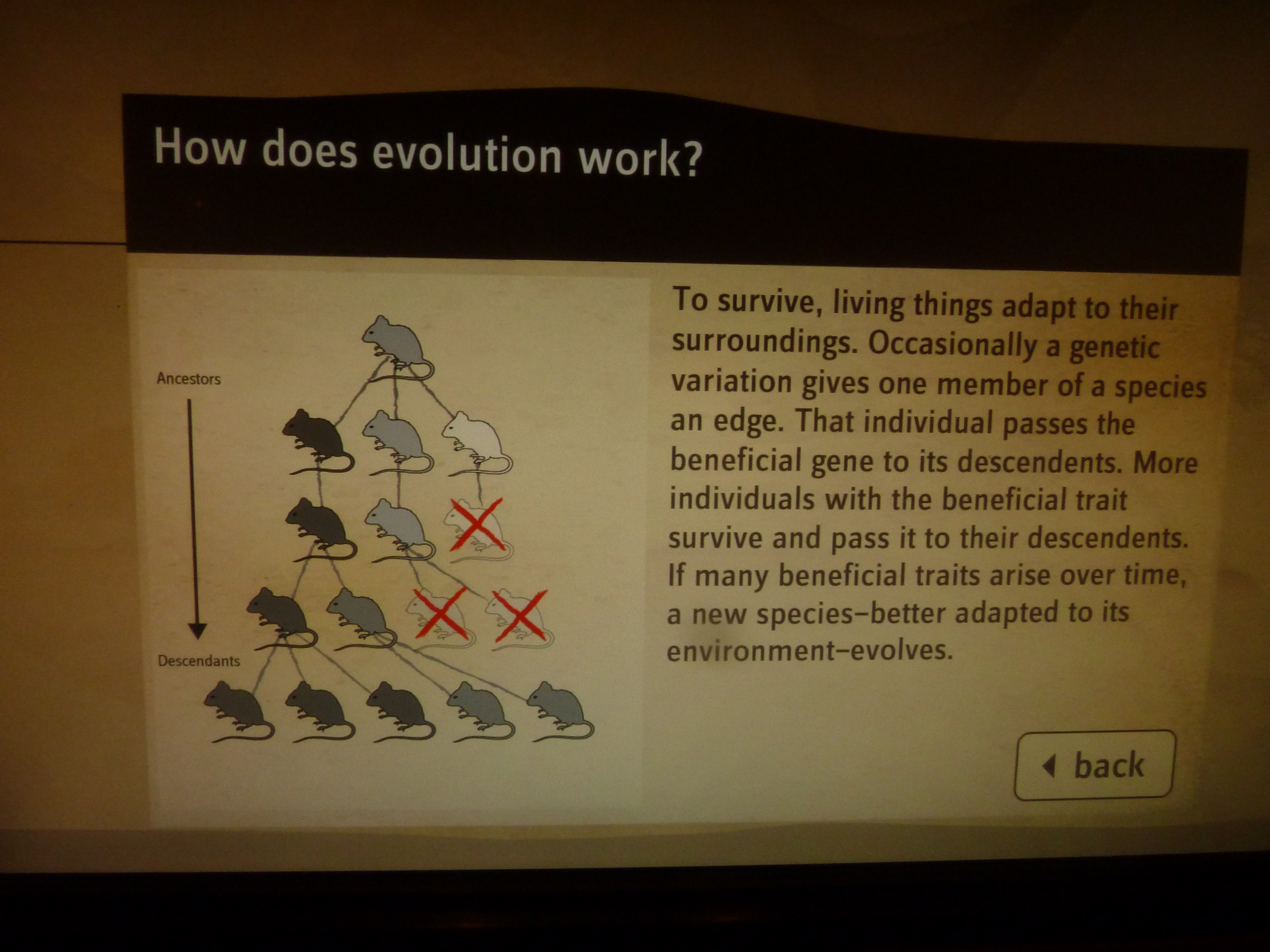 So, when viewers were urged to submit questions to the curators and other viewers, I typed in this one. Larry Moran is gonna love me! 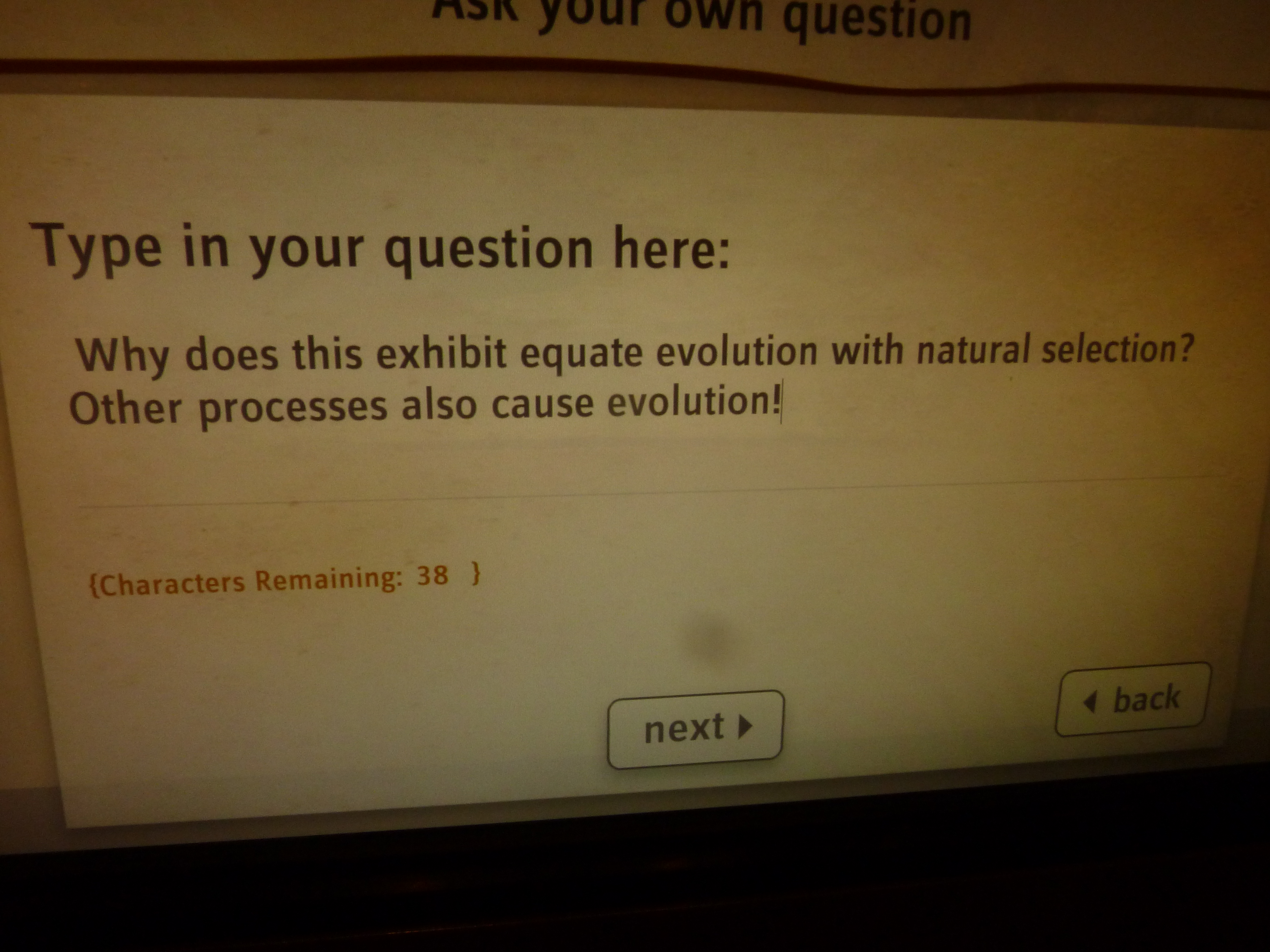 All in all, I’d give the exhibit the grade of B, or even a B-. There are simply too many questionable assertions presented as fact, too many errors, and too much pandering to religion and political correctness (a video near the end asserts that human “races” don’t exist). But I’m a petulant evolutionist, and urge everyone, scientist and layperson alike, to visit this exhibit, if for no other reason than to see the remains and artifacts of our ancestors.

18 thoughts on “Moar on the Smithsonian’s human evolution exhibit”