Last Wednesday, the National Museum of Natural History (known to biologists as the USNM, the initials of its former name and still the identifying code on its specimen tags and labels) opened its newest permanent exhibit, the Hall of Human Origins. 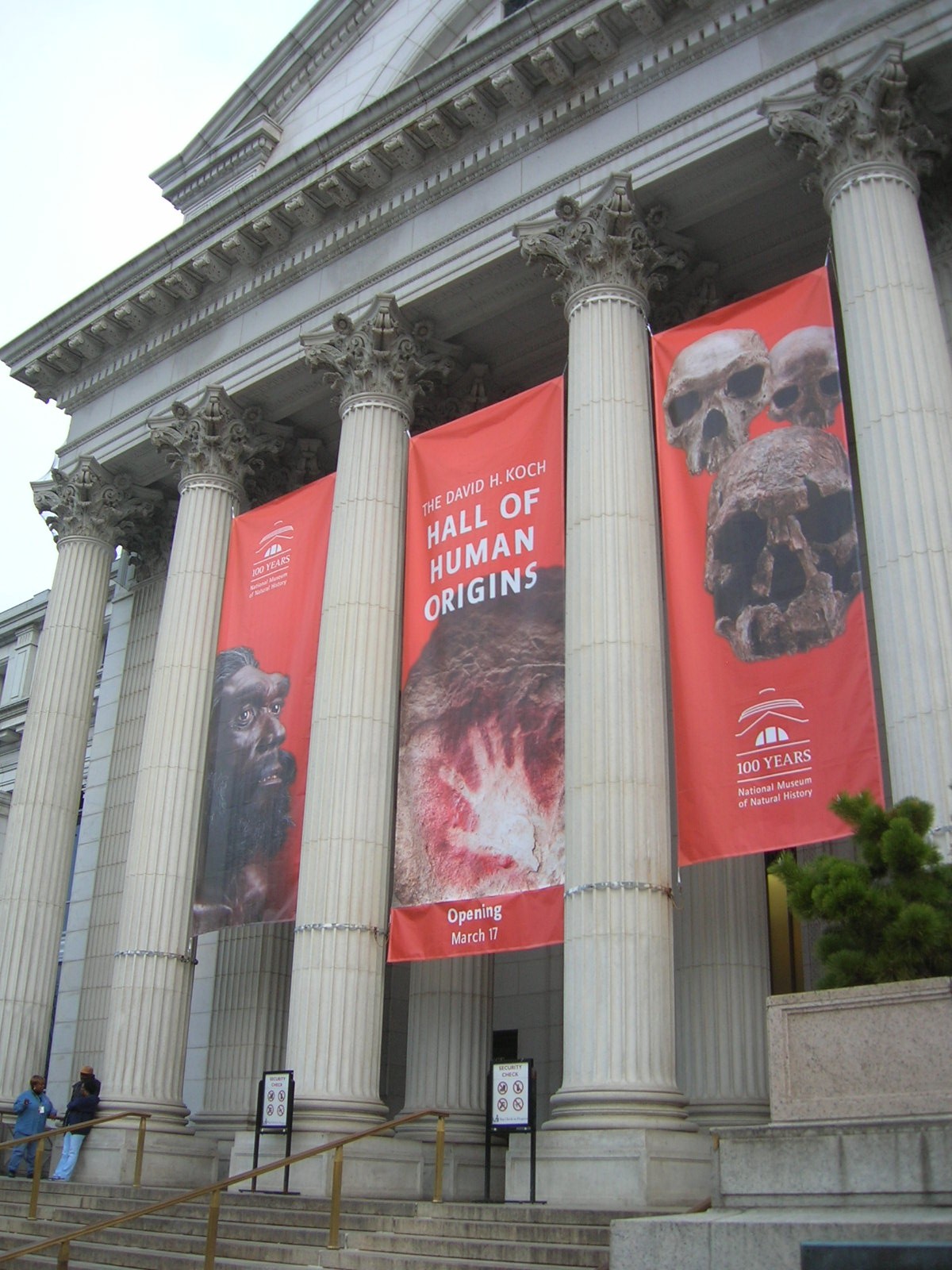 I was at the USNM much of last week, mostly doing research in the collections and meeting with colleagues, but I always like to take a look at the exhibits, and I’d in part planned my visit to be able to catch the opening on the last day of my visit. Unfortunately, it turns out the exhibit was only open from 12-3, the rest of the day being reserved for media and VIPs, so when I went to see it a bit after 3 all I could see was one skull through a crack in a barrier. I’m planning another go at it this summer, but some of the original specimens, loaned by foreign museums for the opening, are likely to have been replaced by casts by then.

Edward Rothstein, the New York Times’ museum reviewer, whose reviews I always find interesting, did get to see it.  He gives it a mixed review. A hall worth “repeated, close viewing” suggests an exhibit rich in the diversity and number of its specimens, a characteristic of the “cabinet” style in museum exhibits, but he laments the poor execution of the computers and touch screens of the “interactive” style:

The hall bears repeated, close viewing, though children will also find amusements here, including the opportunity to come face to face with floor-level bronze models of their ancestors. But the two computer simulations at the exhibition’s end — one a simplified Sims-type game of cultural and environmental choice, the other a cartoonish vision of possible future evolutionary change — should be far more subtle. More wall text summarizing themes would have also helped: too much is left to the text of touch screens, buried inside menus of choices.

He also raises an issue that concerned me when the opening was announced last fall: that the exhibit might adopt some theological viewpoint:

There are times too when it seems as if the Smithsonian has almost gone too far in humanizing evolution, as if it were answering those who, on religious grounds, object to the evolutionary universe and its inhuman brutality. (A touch-screen F.A.Q. suggests simply that such visitors use the show to “explore new scientific findings and decide how these findings complement their ideas about the natural world.”)

At any rate, the exhibition’s focus doesn’t really give us a feel for the daring of the evolutionary vision, which is a tale not of progress but of accident, frightening in the moment, fortuitous only in retrospect.

At the exhibit website, I found the page for the Broader Social Impacts Committee. The committee consists of 14 people, all but one of whom are identified by their religion (including one “Humanist”). This is a rather odd composition and set of descriptors for a group concerned with broader social impacts– no historians, sociologists, political scientists. But as the website makes clear, the charge of the committee is to deal with religious issues. The following statement from the website, while straightforward in acknowledging the diversity of views, seems to prefer the last view (“interaction or engagement”), but its not clear to me what exactly this view entails:

There are a number of different approaches to the science-religion relationship. One approach is to see science and religion as separate domains that ask different questions focusing on separate interests in human life – for example, about the natural world in science and about God in religion. This approach depends on respecting and maintaining the distinctions but can sometimes overlook the ways in which scientific interpretations may have an effect on religious beliefs. Conflict is seen to arise when efforts are made to eliminate the separation that the first approach assumes. The strongest conflicts develop when either science or religion asserts a standard of truth to which the other must adhere or otherwise be dismissed. An alternative approach sees interaction or engagement as positive. Engagement takes many forms, including personal efforts by individuals to integrate scientific and religious understandings, statements by religious organizations that affirm and even celebrate the scientific findings, and constructive interactions between theologians and scientists seeking common ground, respect, and shared insight into how the science of human evolution contributes to an awareness of what it means to be human.

My full opinion will have to wait till I get to see the exhibit myself. One thing I’m looking forward to are the new reconstructions.  John Gurche, the renowned scientific artist, has made a set of incredibly detailed life reconstructions for the exhibit (seen here; check out the rest of his website for more paintings and sculptures), and Smithsonian Magazine has had two pieces on them.

But the retrospective vistas provided here are, nevertheless, compelling and illuminating. This was conceived as a permanent exhibition, meant to serve a generation of visitors, but it was also designed to be easily adaptable to the pressures of scientific advances and visitor tastes. The evolution continues.

(PS: On the way in to the museum that morning, Greenpeace protesters, dressed like law enforcement agents from the “Climate Crimes” unit, handed me a flyer denouncing David Koch, who contributed most of the funding for the hall (and whose name is on it). More on this angle at the Wonk Room and USA Today.)