Last Monday I spent a few hours at the Smithsonian‘s National Museum of Natural History (originally known as the United States National Museum, and still known as the USNM to scientists, even after the Smithsonian began collecting art, airplanes, tchotchkes, etc., and thus gave its museums more specific names), and came across WEIT in their gift shop. 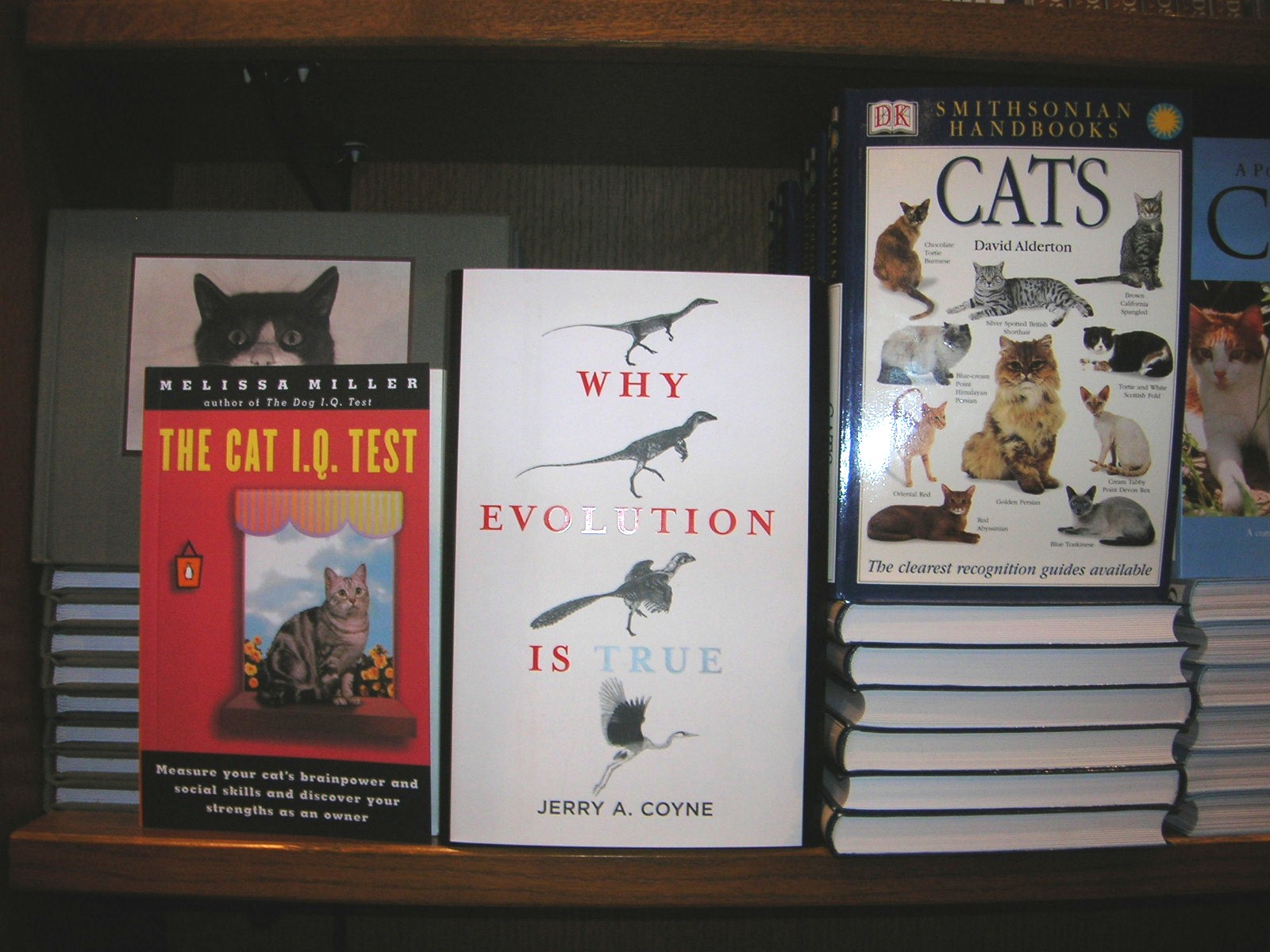 I moved this copy about two feet to the right to photograph it, because I thought Jerry would appreciate the surroundings: it’s almost a diorama.

The great natural history museums, such as the USNM, are among the world’s premier scientific institutions.  The mission of the Smithsonian Institution, 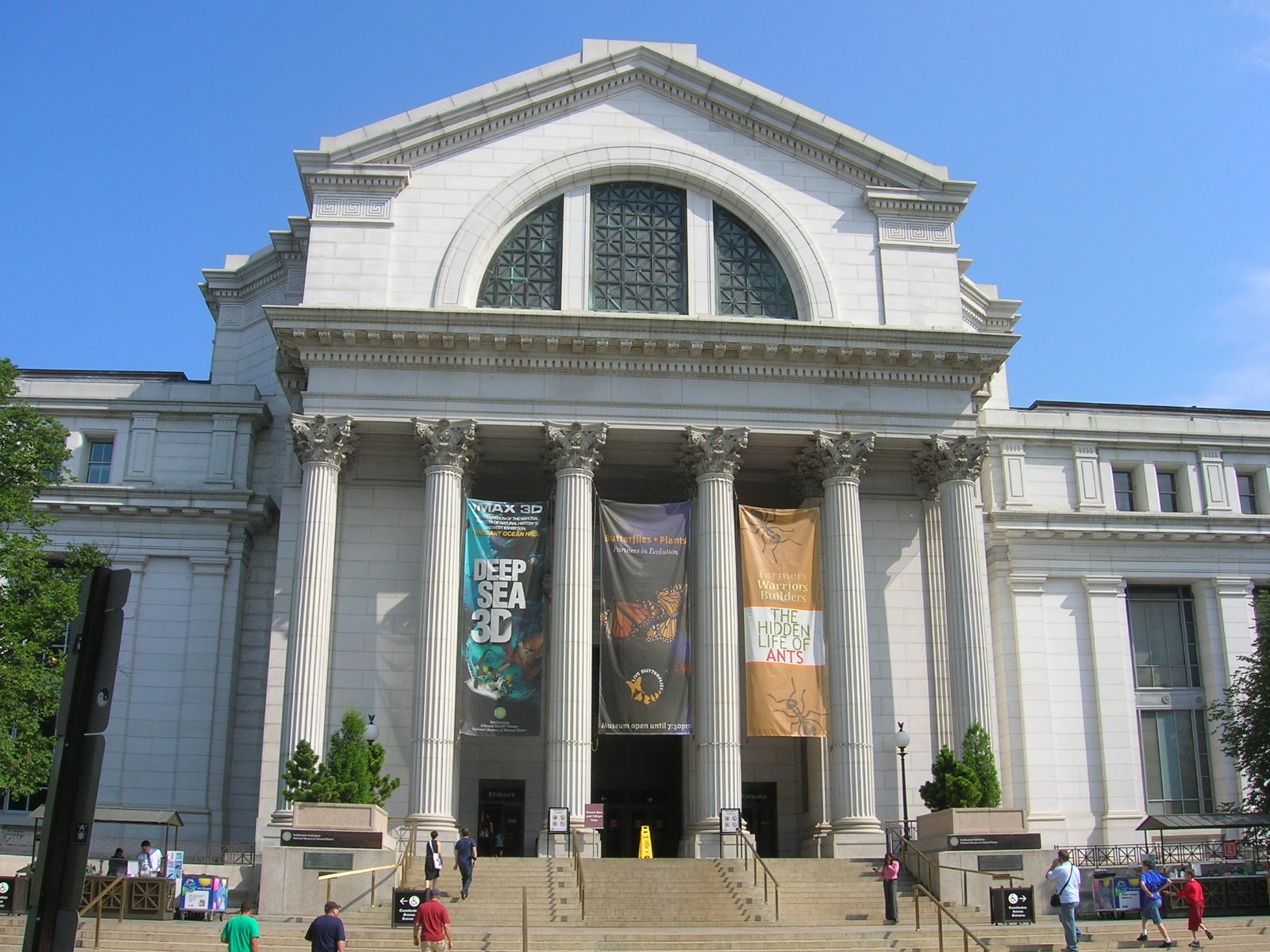 bequeathed to it by its founding benefactor, James Smithson, is the “increase and diffusion of knowledge”, and it is a fitting mission, encompassing both research and education, for not only museums, but also universities. Having been a postdoctoral fellow at the USNM twenty years ago, but not having had a chance for many years to go through the exhibits (which are a chief way in which the USNM diffuses knowledge), I wanted to see how the exhibits had changed.

The old evolution exhibit had been taken down some years ago, and a new Ocean Hall stood in its place; I was anxious to see how the newer exhibits covered evolution and the history of life, which had always been a theme throughout exhibits such as Dinosaurs and Life in the Ancient Seas, and of course are the major themes of the work of the USNM’s researchers. I didn’t think that the Smithsonian would have succumbed to any external pressures: they successfully fought off a creationist legal attack in 1980, eliciting from the DC Circuit Court of Appeals the memorable ruling that the balance between freedom of religion and learning

…was long ago struck in favor of diffusion of knowledge based on responsible scientific foundations, and against special constitutional protection of religious believers from the competition generated by such knowledge diffusion.

I’m happy to report that the presentation of evolution is even more forthright than I’d anticipated.  This sign greets visitors in the Rotunda, at the feet of the USNM’s iconic elephant: 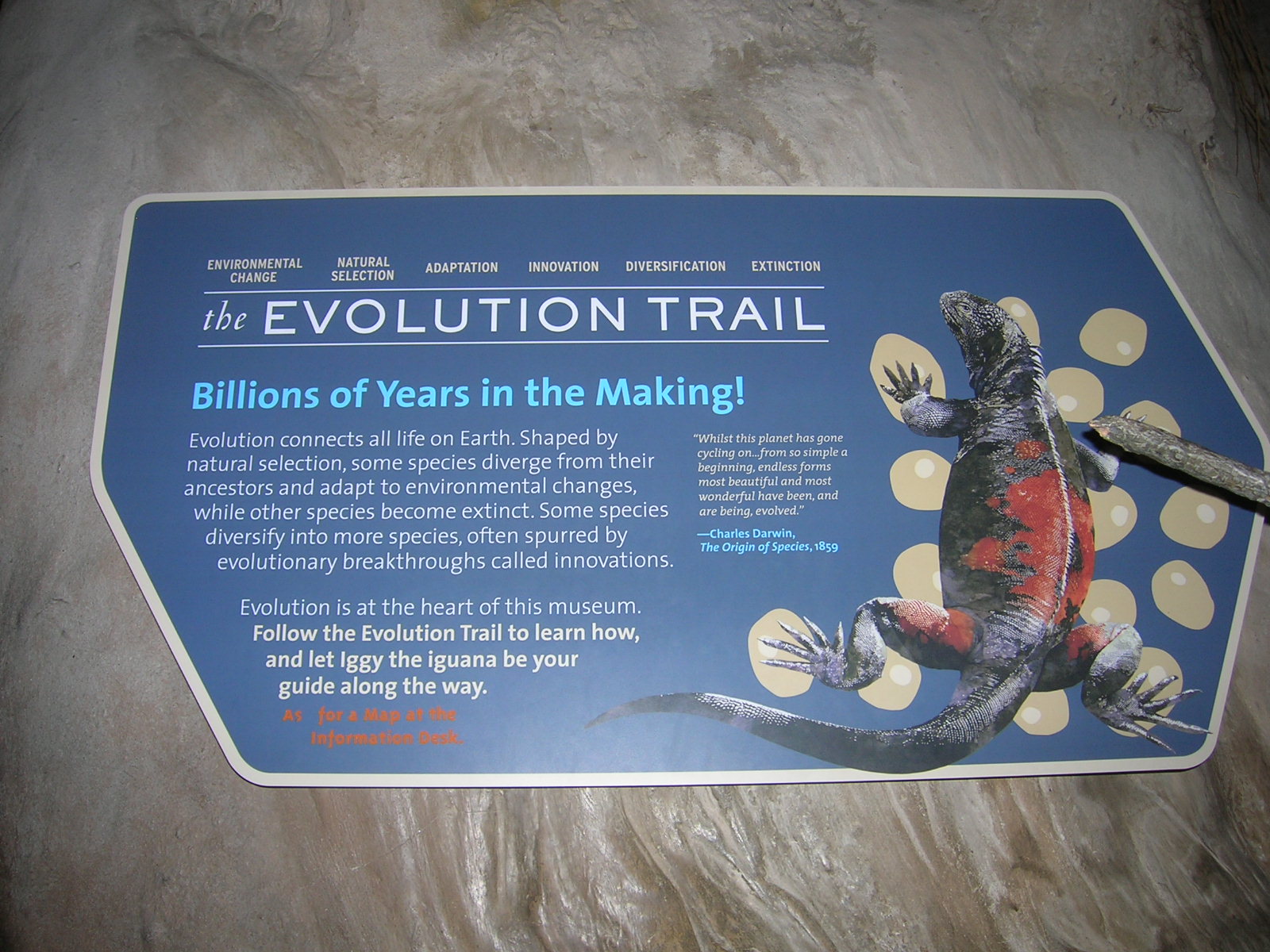 Note particularly the line “Evolution is at the heart of this museum.” 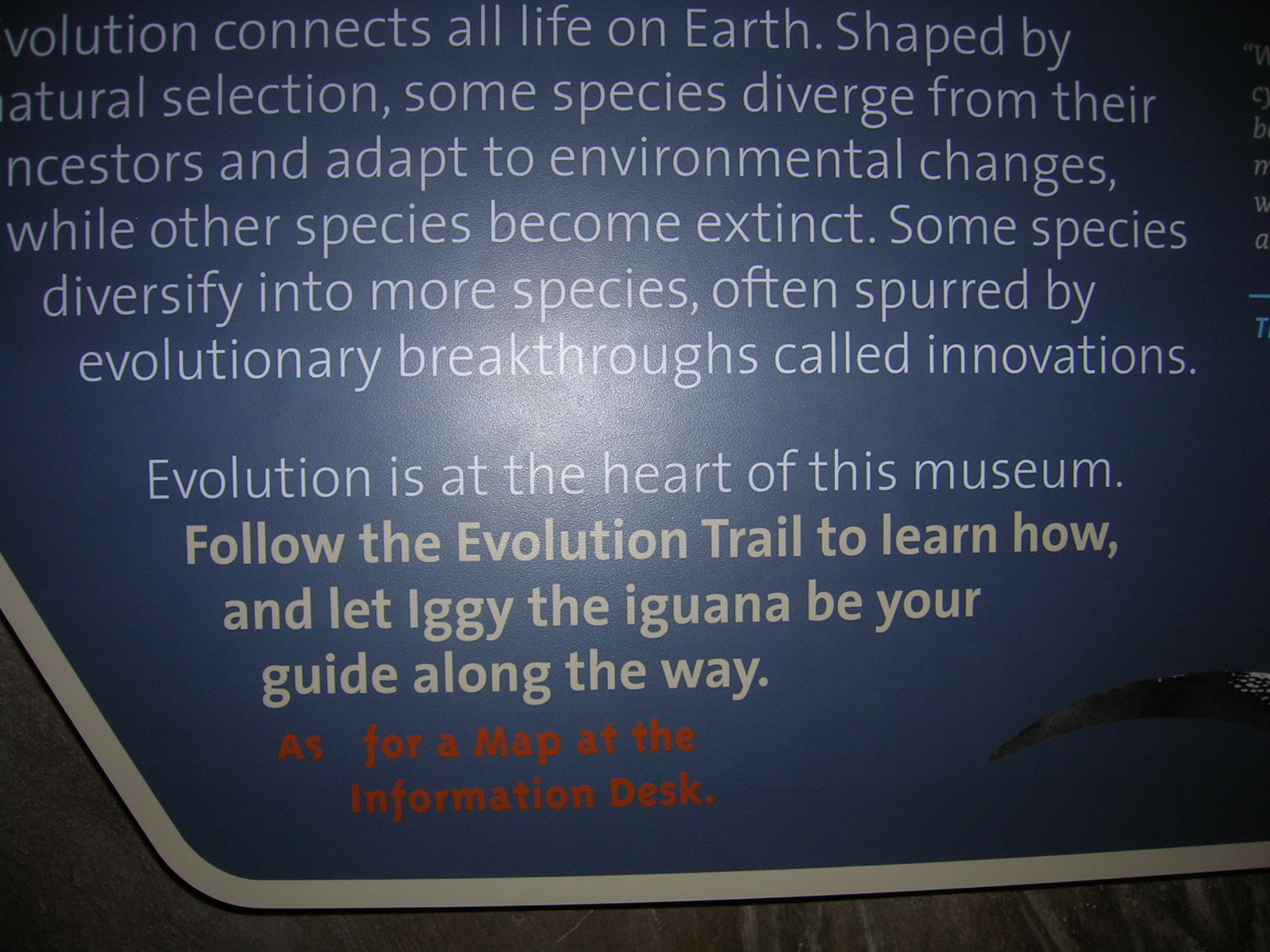 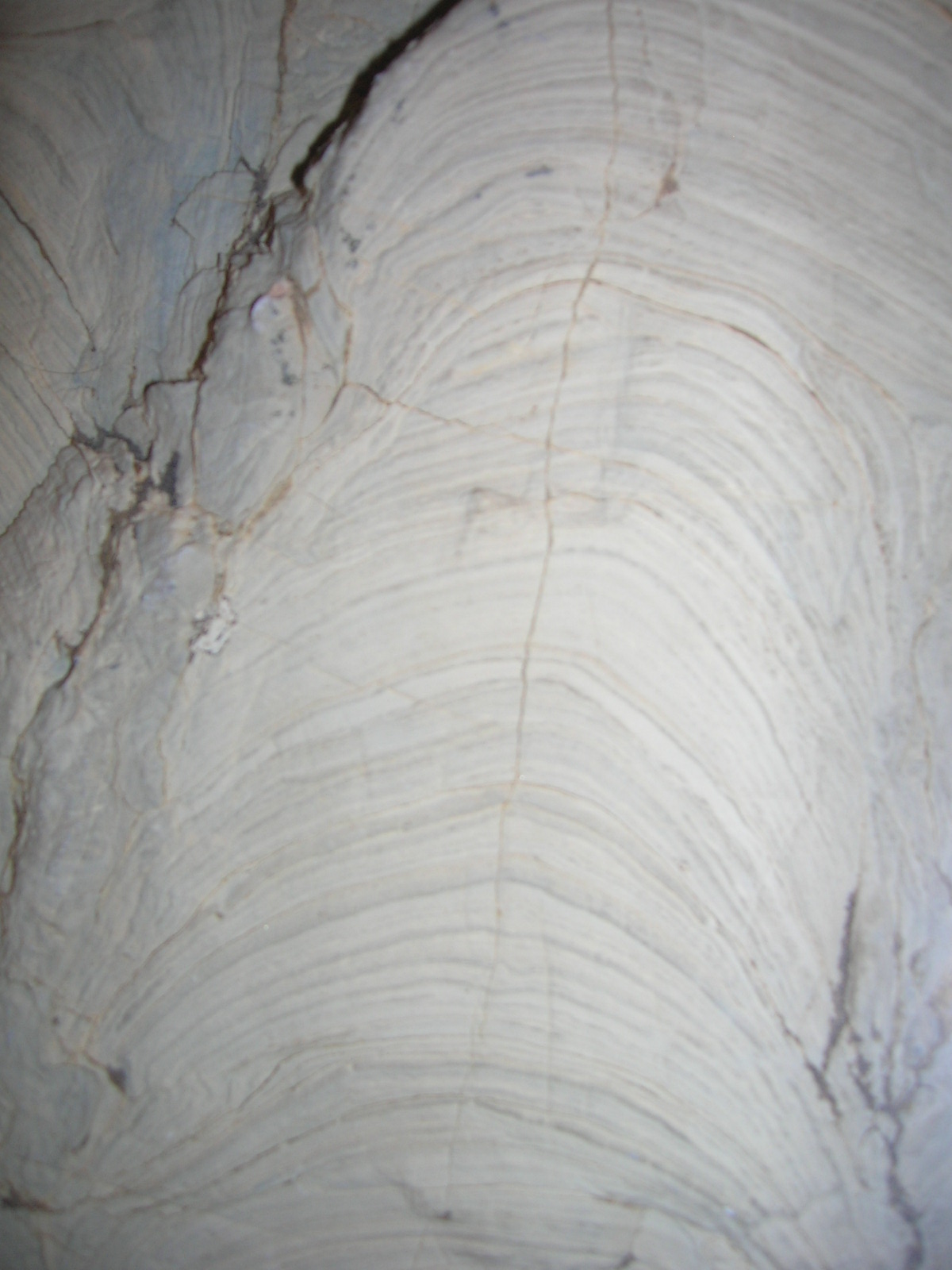 In the Ocean Hall, one of the main galleries is devoted to the origin and history of life on earth, including everything from stromatolites, to a very nice exhibit on the origin of whales (see here, too), a story highlighted in chapter 2 of WEIT. Hung from the ceiling are skeletons of  the sea lion-like Maiacetus, and the fully marine, yet hind-legged, Dorudon and Basilosaurus. 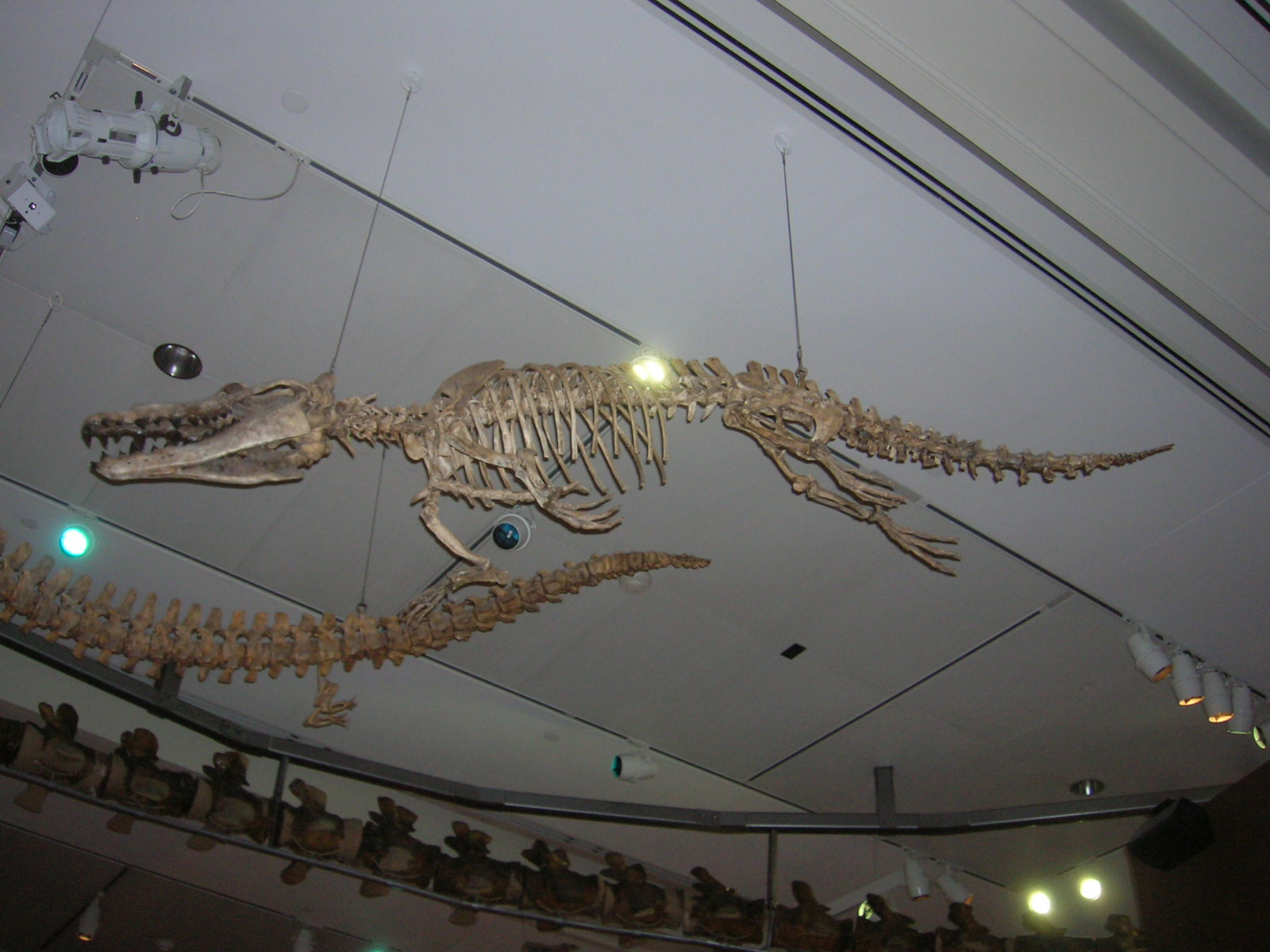 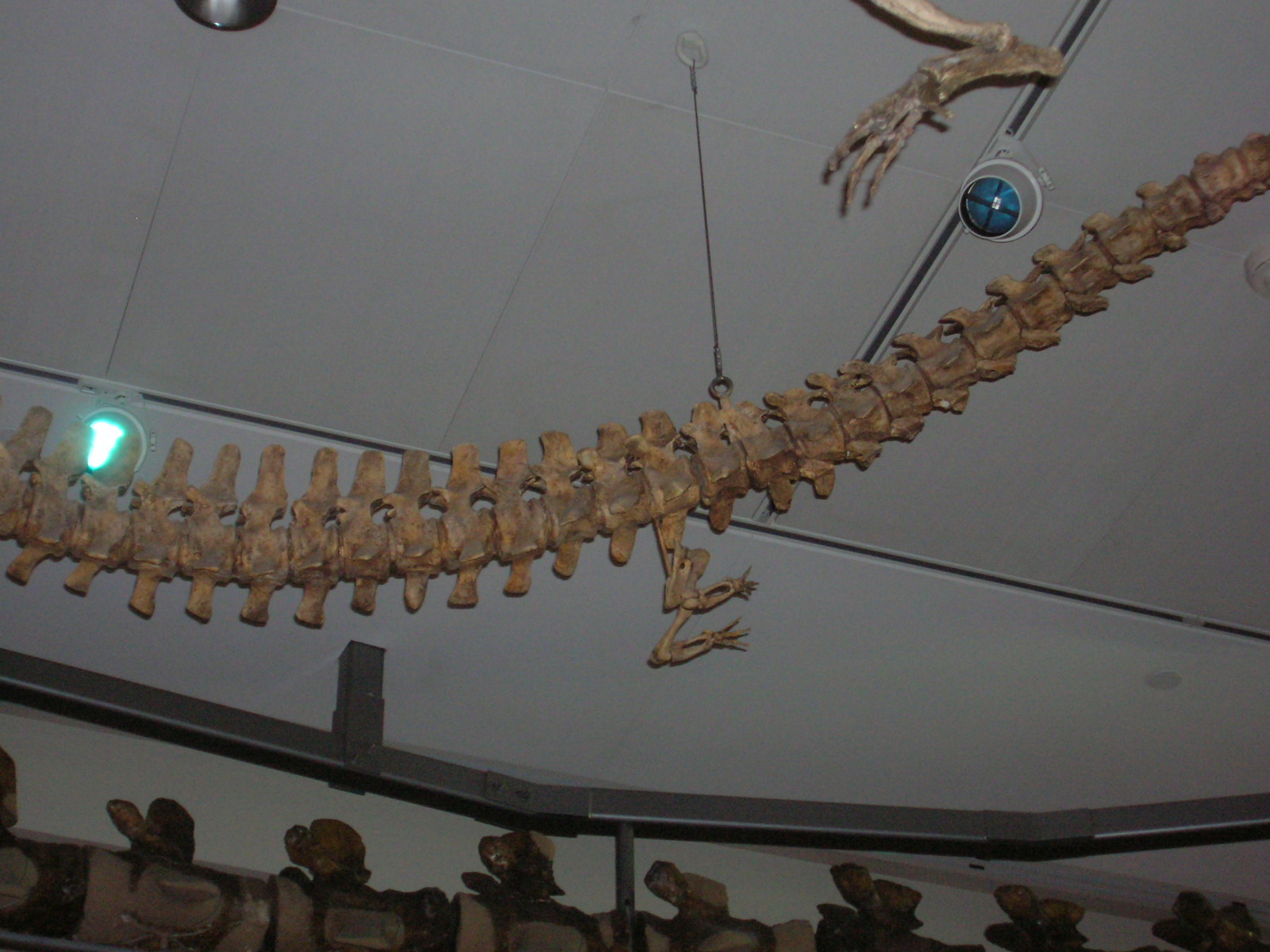 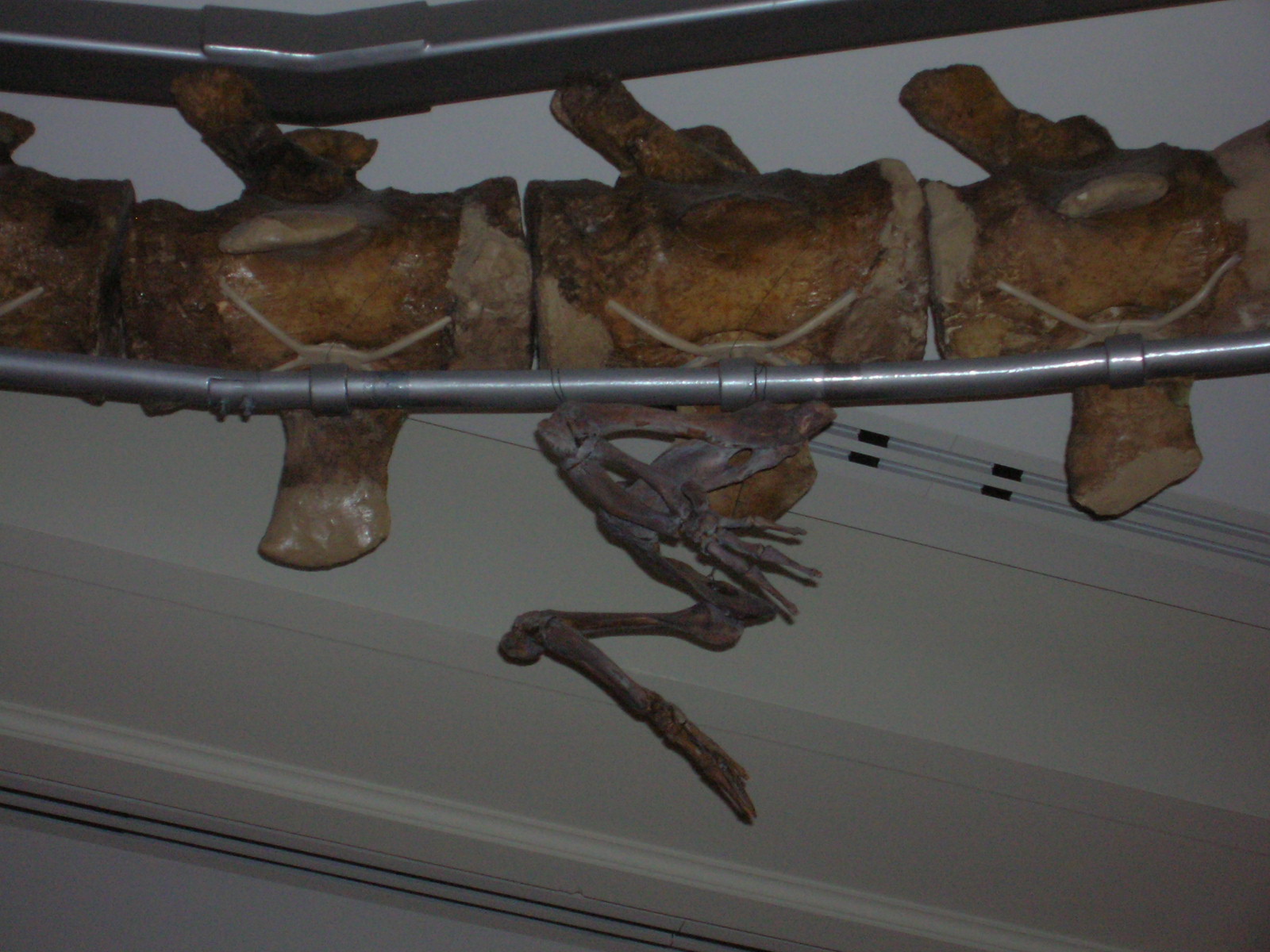 There are also two temporary evolution exhibits opening next month. Darwin’s Legacy will be about Darwin and how his “theory soon found supporters at the Smithsonian, including Joseph Henry, the first Secretary of the Smithsonian Institution, and it continues to guide research at the National Museum of Natural History.”  The exhibit Since Darwin: the Evolution of Evolution

focuses on the significant role that Darwin’s theories have played in explaining and unifying all the biological sciences.  Specimens from the Museum’s diverse collections, along with documentation from our ongoing research, illustrate the importance of evolution as a scientific foundation, and how our knowledge of evolution has evolved over the last 150 years.

I was also interested to see how the USNM had fared with regard to two other issues facing modern museums: commercialization and exhibit design.  Museums are under increasing financial pressure, and even publicly supported institutions have had to seek at least supplementary private funding. There are potential pitfalls with such funding though: private funding  might distort the mission or the message of the museum. The USNM had experienced a controversy over this while I was there, when the insect extermination company Orkin sponsored, and had its name put on, the Insect Zoo. There have been other controversies concerning donors since. I found that the named-by-sponsor exhibits were still there, but had not increased substantially.  The new Ocean Hall was named for Roger Sant, a member of the Smithsonian’s Board of Regents, and a major donor. And there was a temporary exhibit on forensic anthropology co-sponsored by the History Channel, but the exhibit contents largely allayed my fears that the exhibit might be made to cable TV standards of quality. Most annoying, but not at the USNM, but rather across the mall in The Castle, was a heavily hawked tie-in to the movie Night at the Museum: Battle of the Smithsonian. 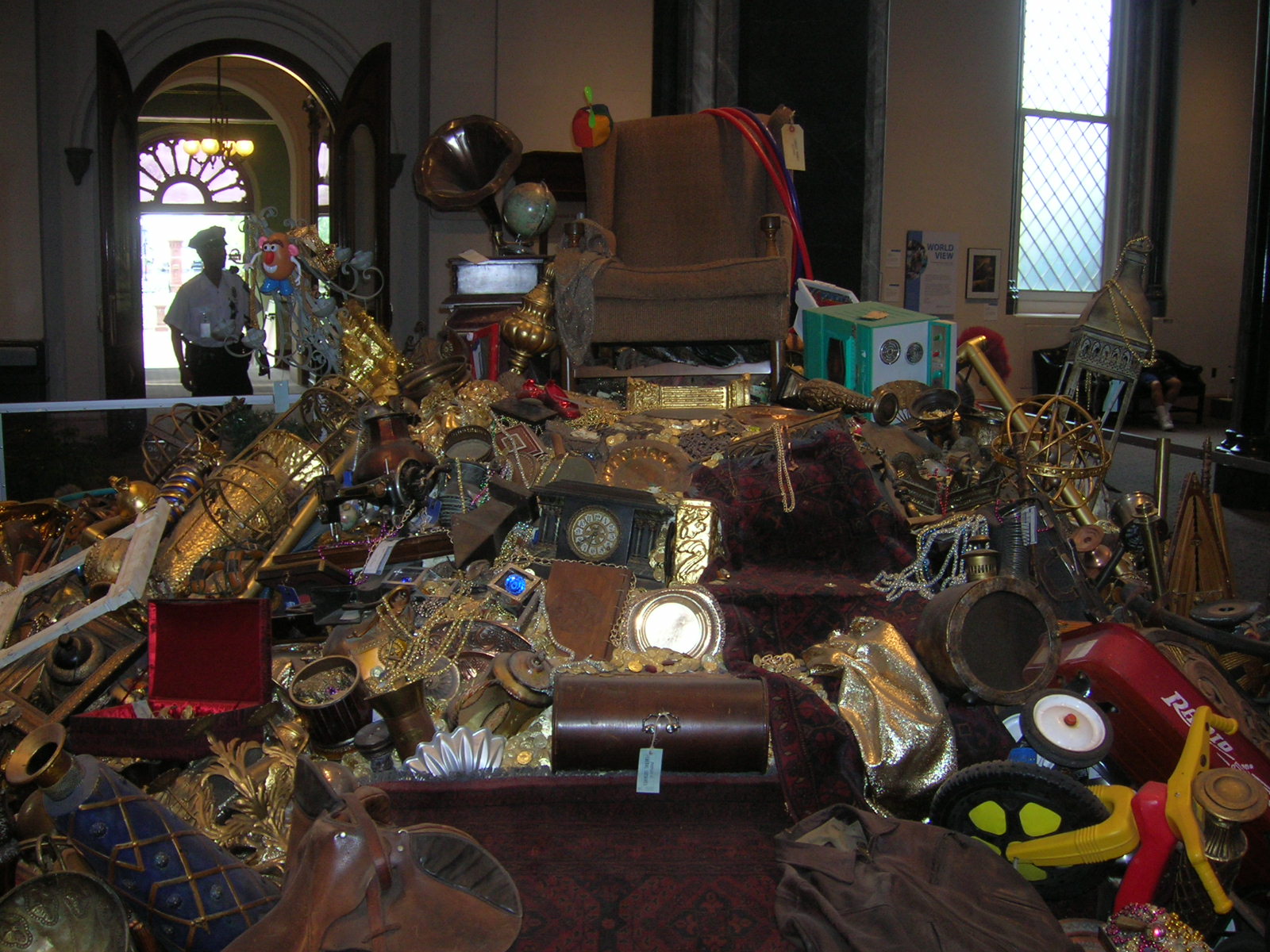 In its exhibit halls, the USNM seems to have avoided the worst of corporate sponsorship, such as the garish corporate-advertising-masquerading-as-sponsorship I’ve seen in some zoos and even national parks.

As regards design, there has for many years been a tension between exhibits that are rich in the number and diversity of labeled specimens they contain, and those that are “interactive”.  The modern trend in design, as Steve Gould (Natural History, January 1994; see also his “Dinomania” in the NYRB) put it, has been

…fewer specimens, more emphasis on overt pedagogy, and increasing focus on “interactive” display (meaning good and thoughtful rapport of visitor and object when done well, and glitzy, noisy, push-button-activated nonsense when done poorly)…

The former notion of what makes for a good exhibit, which Gould admired and called “cabinet museums”, still informs, if not dominates, most of the USNM’s exhibits, including the newer ones such as Ocean Hall. While not consisting of row after row of specimens in the Victorian model, the newer exhibits continue to be rich in the diversity and number of specimens exhibited, and in the excellence of their labeling. A small exhibit in The Castle harks back to the Victorian model, but the best example of this approach I know of today is the marvelous Sense of Wonder at the Milwaukee Public Museum, a deliberate recreation of the older style. The juxtaposition of specimens is a major intellectual benefit of a such a style: it practically mandates that viewers begin composing “compare and conrast” essays in their heads. Such comparisons are a source of wonder, and an inspiration for systematics, comparative anatomy, and , indeed, much of the whole of biology. As a graduate student, I spent many hours “animalizing” (as we called it) studying the skeletons in the Museum of Comparative Zoology‘s Hall of Mammals (which is also close to the Victorian model). The USNM’s Osteology Hall, with its many vertebrate skeletons, has something of the same flavor. 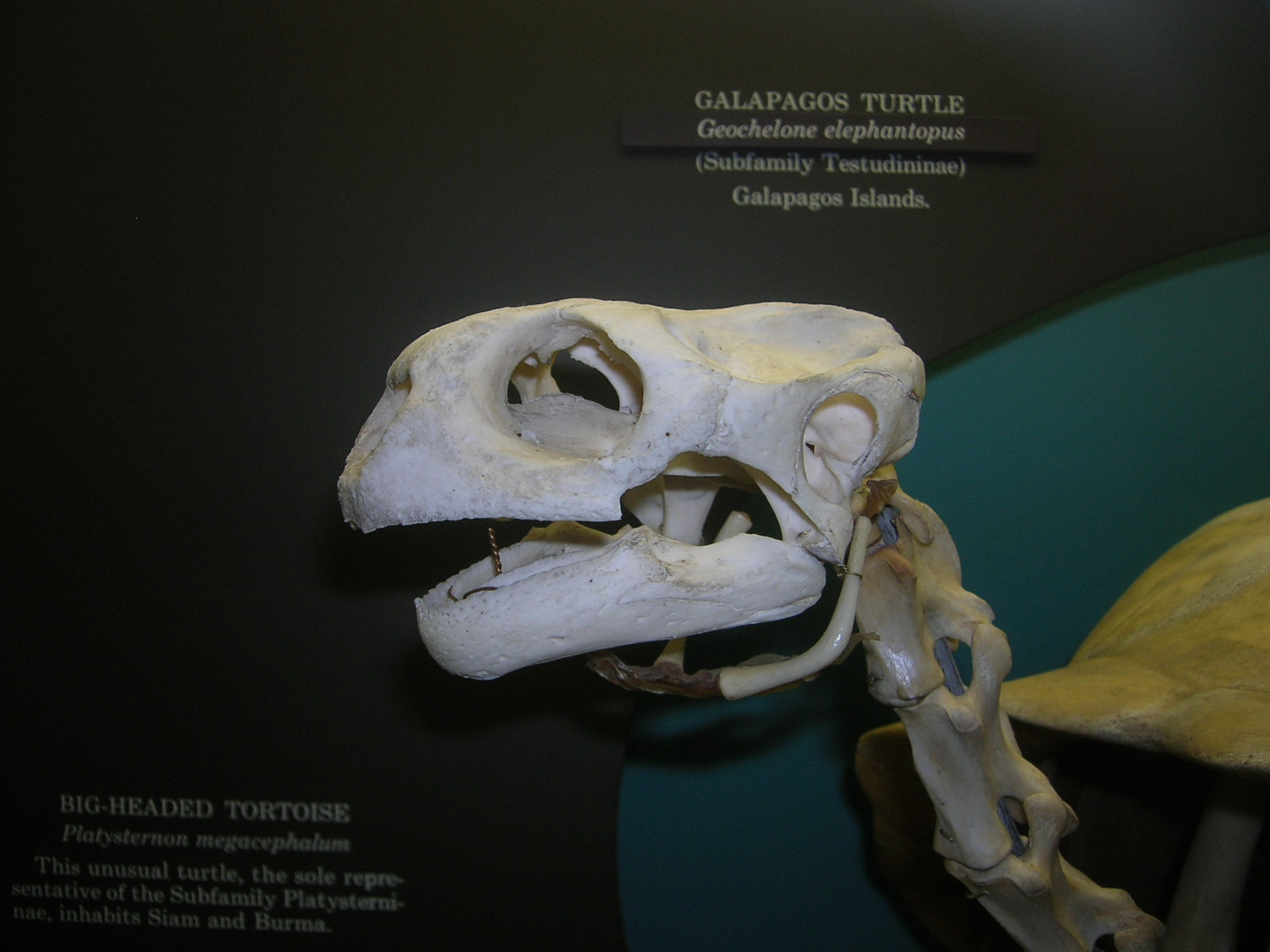 My major criticism of the newer exhibits, especially the Hall of Mammals, is that they have largely left out dioramas, which, to me, have always been among the most compelling components of a natural history museum. A late Victorian development of the cabinet style pioneered by Carl Akeley at the Milwaukee Public Museum, and reaching perhaps its apogee at the American Museum of Natural History, a diorama associates animals and plants that live together in a natural setting.  Most suited for exhibits with a biogeographic arrangement, their richness and frequency serve as  a means to distinguish the great, from the merely good, public exhibit museums. 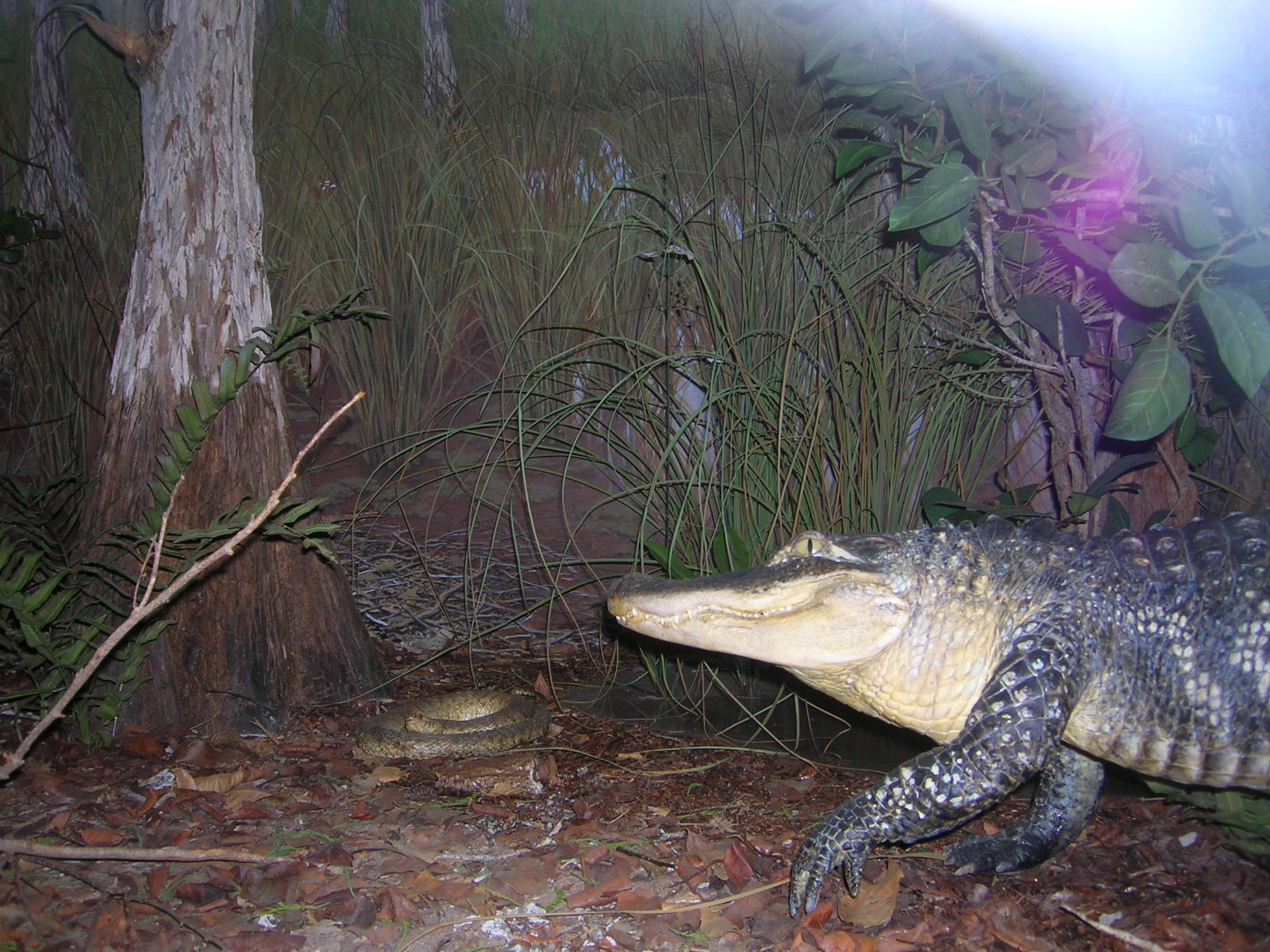 In the mammal hall, the mammals have been removed from the environmental context provided by the diorama, and presented against stark backgrounds painted in neutral colors, with a minimal or stylized attempt to portray the environment. Glass-panel walls and overhanging girders dominate the main exhibit hall. In part, this separation of organism from environment harks back to the early Victorian cabinet museum, with its unadorned skeletons and taxidermy mounts. These early exhibits are redeemed by the richness and density of the specimens, but this only partly mitigates the present exhibit. I think there are advantages to both the diorama and the starker style evident here, but to give up the one almost entirely is a mistake.  This is seen most clearly in a segment of the mammal hall entitled “Savanna Waterhole“, where a giraffe and zebra stretch to drink, but there is no waterhole, and another zebra looks back at a glass wall. 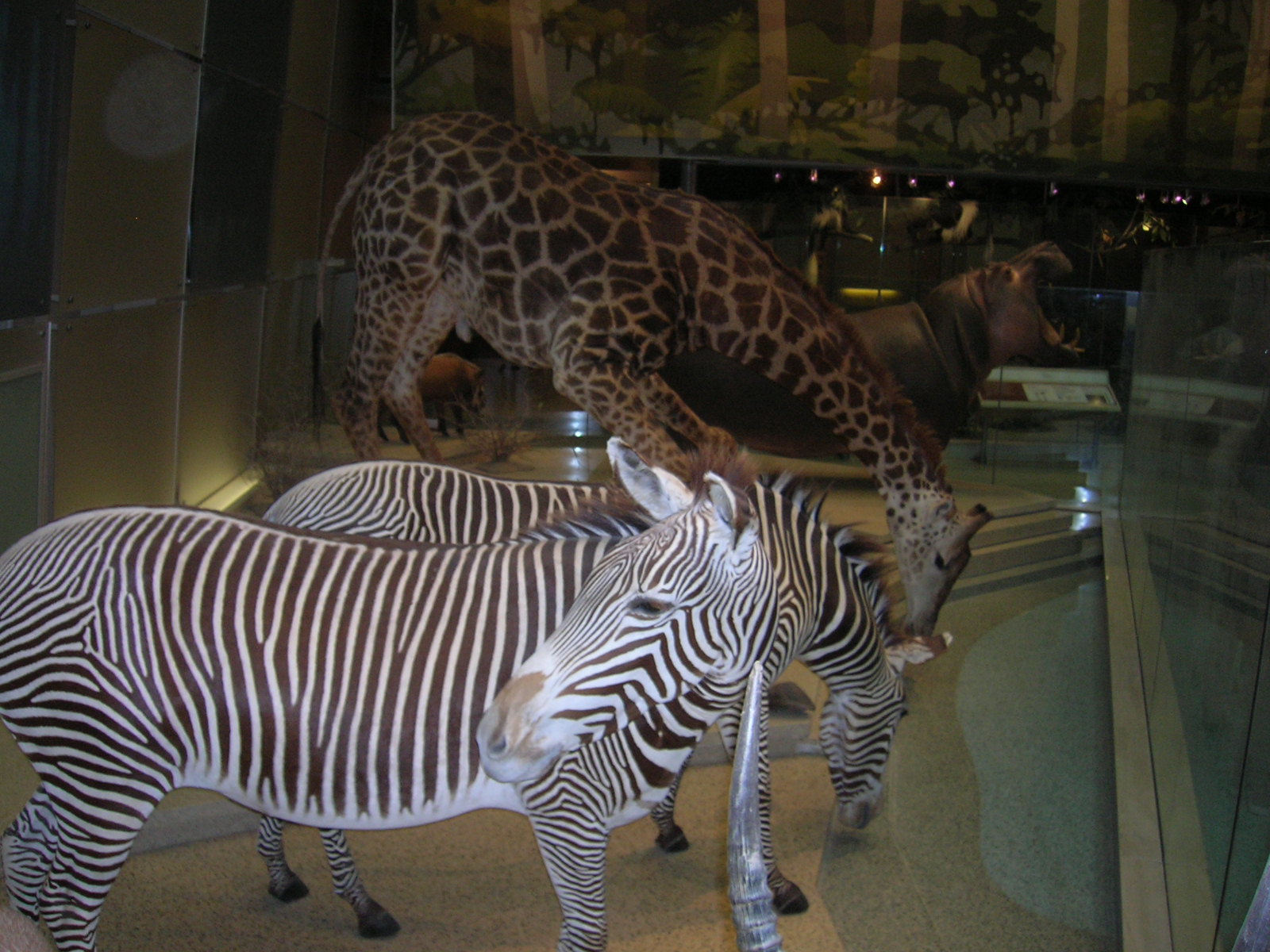 Despite this criticism, there is much to admire in the mammal hall, and much to learn in it. This hall, and the museum as a whole, is a wonder, and one of the nations, and the world’s, scientific and educational treasures. To walk through the USNM’s exhibit halls is a marvelously enjoyable, richly rewarding, and deeply edifying intellectual and aesthetic experience.

Addendum. In response to some of the comments, here are a couple more items.

I just miss hundreds of different birds in a long, long hallway.

It’s a curved hallway, and somewhat obscurely placed outside the Baird Auditorium, but the Birds of DC exhibit is hundreds of birds in a longish hallway.  Here’s the cabinet that contains mostly owls, but also a passenger pigeon and a Carolina parakeet. 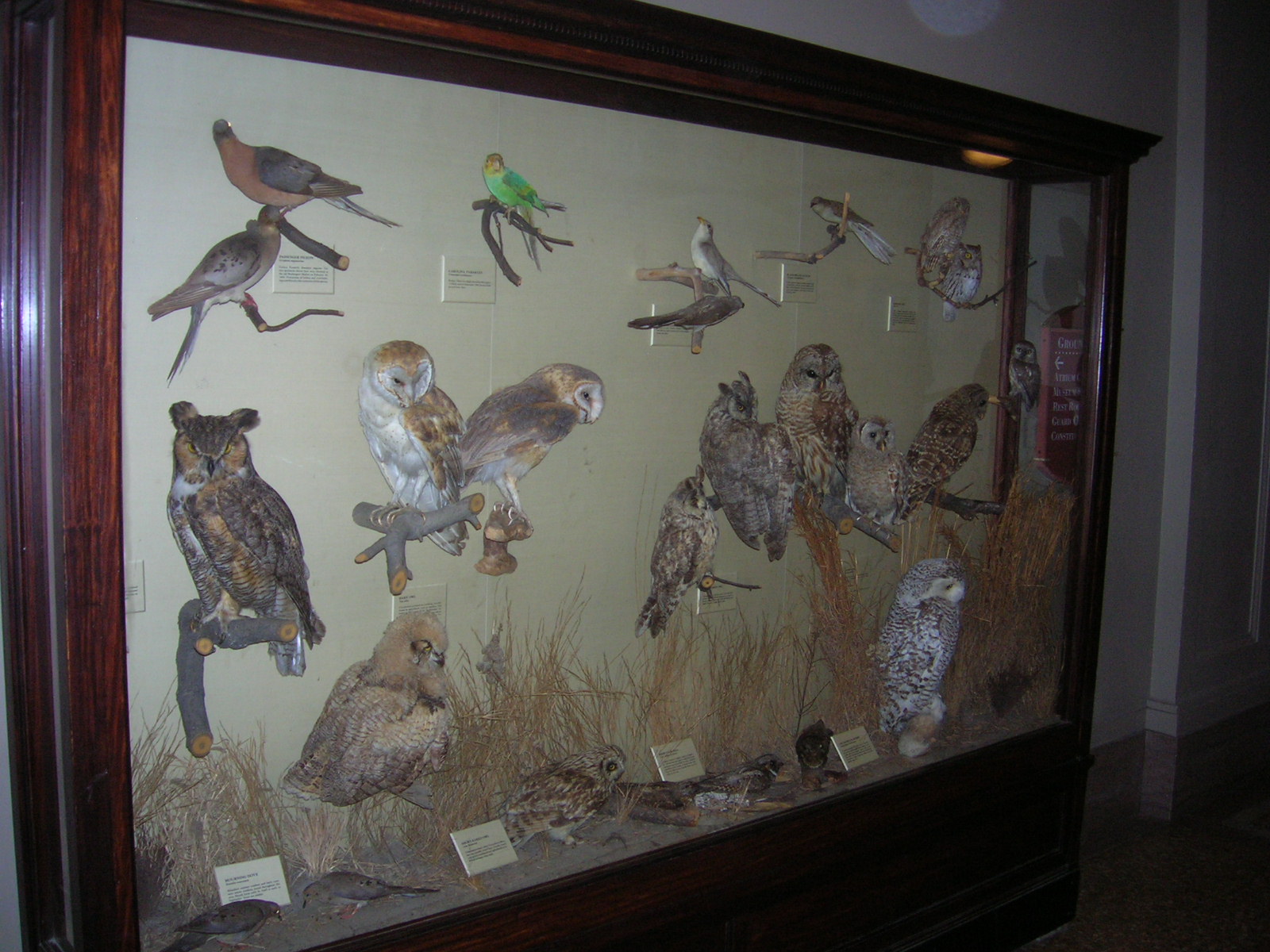 Is the life-size fiberglass blue whale still there??

No, but a life-size northern right whale is, right in the middle of the new Ocean Hall.  It’s modeled after an actual individual whale, named Phoenix, studied by scientists from the New England Aquarium.  The story of its creation is here. 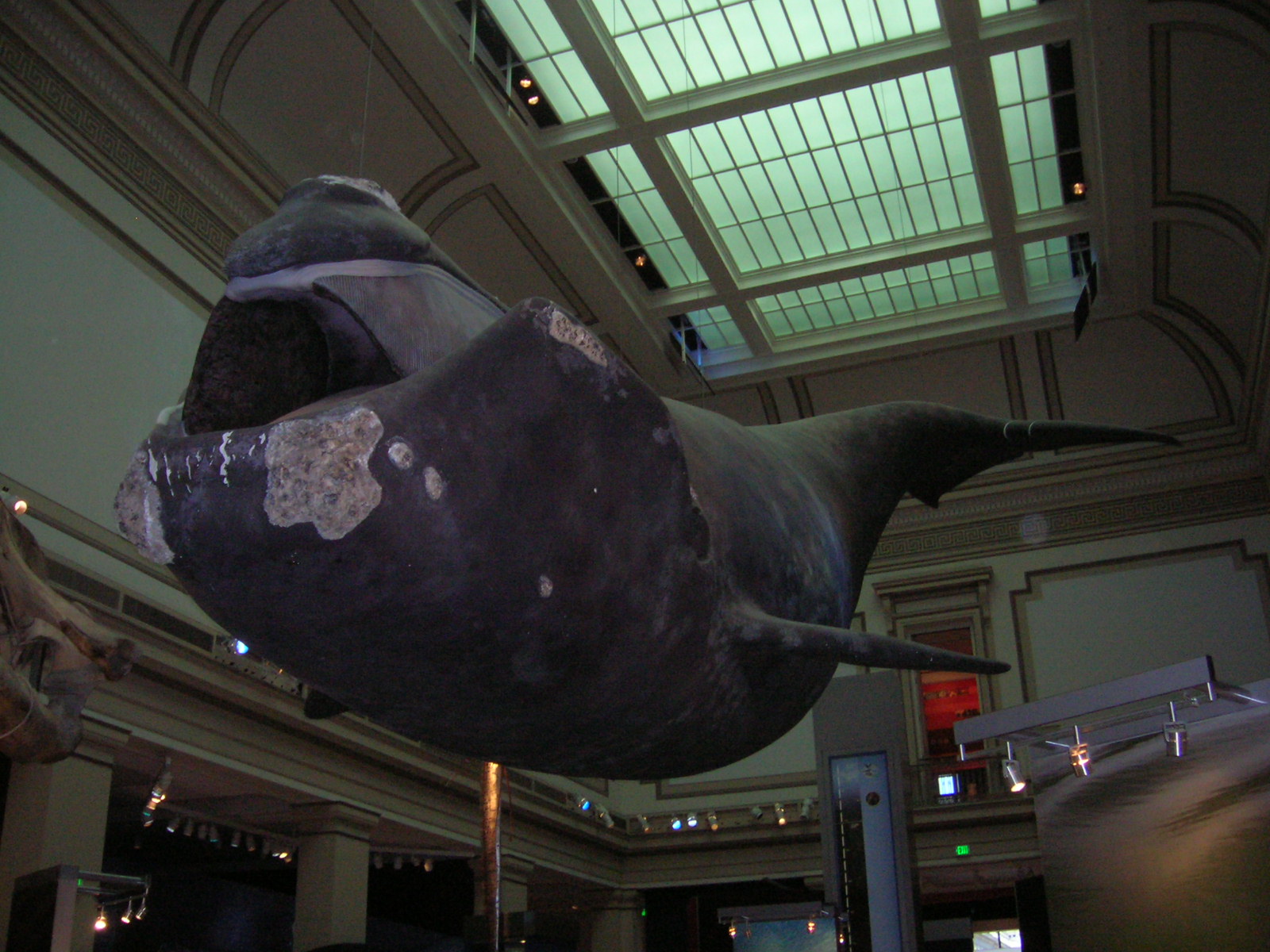 I’m not sure where the blue whale is now. It was part of the Life in the Sea exhibit, which was in what is now the Hall of Mammals (I think– I’m trying to recall the hall layout from years ago, and don’t have an old floorplan). It’s story, up to 1996, is told here in Smithsonian magazine.